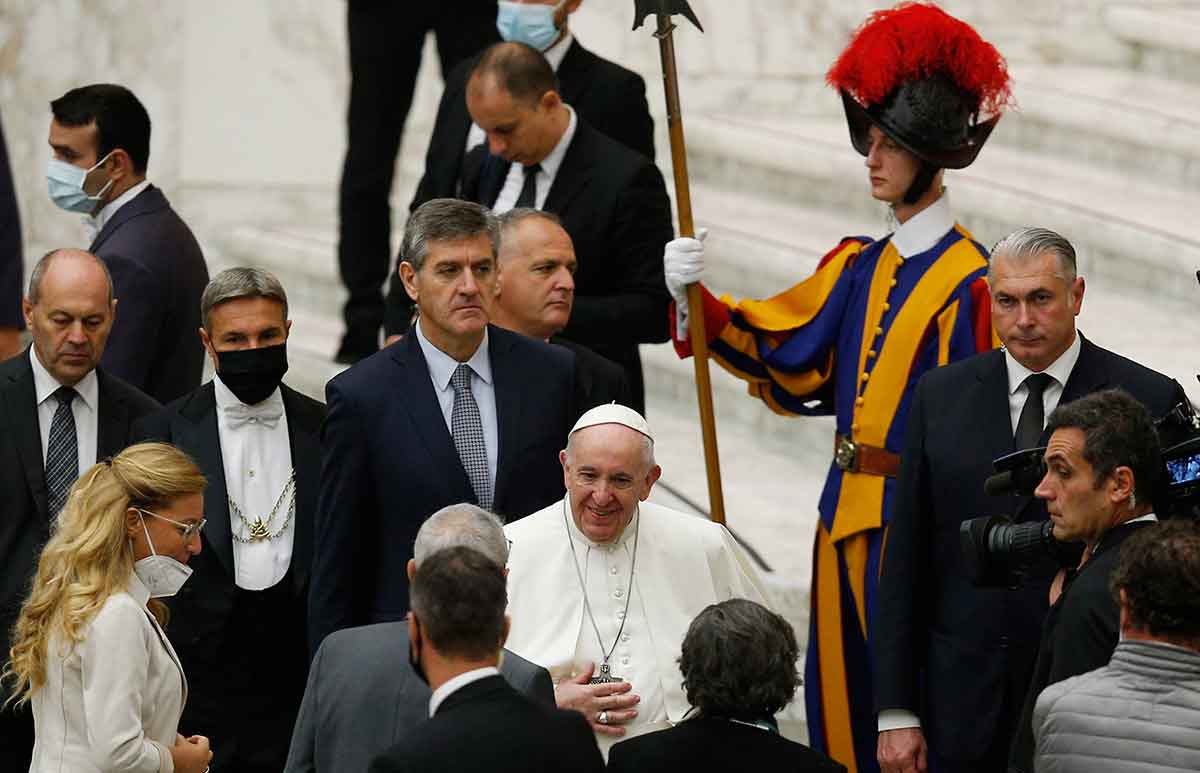 A Swiss Guard is seen as Pope Francis leads his general audience in Paul VI hall at the Vatican Oct. 7, 2020. The weekend of October 10-11, four Swiss Guards were found to have Covid-19 and are symptomatic, the Vatican confirmed October 12. (CNS photo/Paul Haring)

In a note October 12, Bruni said that “over the course of the weekend, some Covid-19 positive cases have been identified among the Swiss Guard.”

He said that so far, four guardsmen had tested positive; they were showing symptoms and had been placed in isolation. The Vatican also was tracing people with whom the four had been in contact, he added.

In addition to the guards, three other people were found to be positive “with mild symptoms” over the “last few weeks” among either residents or citizens of Vatican City State, Bruni said.

They, too, were in isolation in their homes and contact tracing had been carried out, he added.

“In the meantime, as per the provisions issued last week by the governing office of Vatican City State, all the guards, those on duty and not, are wearing masks, outside and inside, and are following the required health measures,” he said.

The Vatican had declared an outdoor mask mandate after Italy did so nationwide October 7. However, at his weekly general audience, which was held indoors October. 7, Pope Francis and many in his entourage, including the two Swiss Guards in uniform, did not wear masks at that event.

The Italian government extended its state of emergency until January 2021 and has been gradually increasing restrictions on gatherings and enacting other preventative measures as infections continue to rise.

Italy has been registering thousands of new infections per day, with nearly 6,000 new cases registered on October 10. The month has seen the highest increase in new cases since the pandemic’s peak in April.