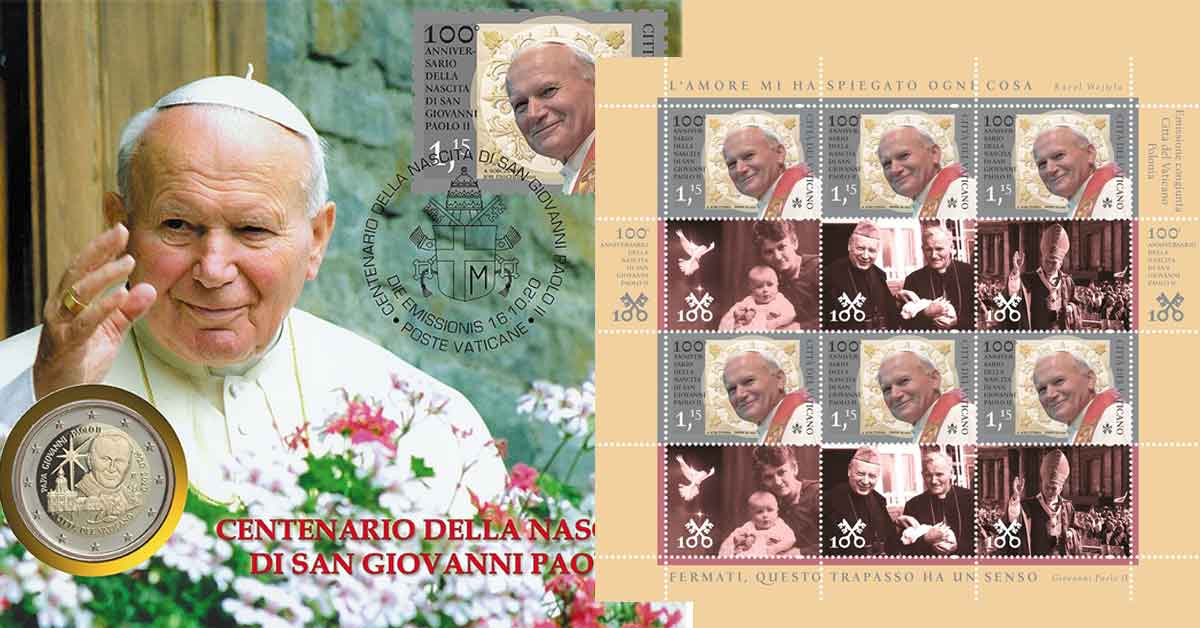 The most expensive Vatican commemorative coins for 2020 continue a numismatic series illustrating scenes from the Acts of the Apostles; the other mid-October issues mark important anniversaries and themes dear to the heart of the pope.

The Vatican Philatelic and Numismatic Office released the coins, which are sold mainly to collectors, October 16.

On the same day, the office released a Philatelic-Numismatic Cover containing a bimetal commemorative two-euro coin and stamp with a special cancellation marking the 100th anniversary of St John Paul II’s birth.

The smiling face of St John Paul used on the stamp was inspired by a photo taken during his 1986 trip to Australia, the office said. “The lilies that make up the ornamental elements in the background – symbolising honesty, chastity and purity – are a clear reference to the Virgin Mary, to whom the pope was very devoted and entrusted his Petrine ministry.”

The bimetal Raphael coin was designed by Daniela Longo, who, the Vatican said, tried to reproduce and interpret “the nostalgia for beauty seen in Raphael’s eyes in the self-portrait present in the fresco of the School of Athens and in the expressions of the two unforgettable little angels that he depicted and placed at the base of the Sistine Madonna.”

The five-euro silver commemorative coin, remembering migrants and refugees, was designed by Marco Ventura and shows St. Peter, holding the keys in his outstretched arms. The Vatican description says the Prince of the Apostles “welcomes, protects and provides for all those who take refuge in the church and who call on us to be a church without borders,” acting as “mother of all” and “showing the way of the Gospel of mercy for a better world.”

The 10-euro coin, which also is silver, commemorates the 50th anniversary of Earth Day, which was celebrated in the spring. Designed by Luigi Oldani, it depicts “a mother carrying the earth in her womb,” according to the Vatican description.

People owe the planet “care and love as if it were a daughter,” the description said.

“The celebration of life on earth is a commitment to take care of the planet, a project to which the church intends to offer its support,” it said. The church’s concern for integral ecology is “a grandiose and complex work” that aims to promote international action to guarantee everyone a future “so that economic advancement may be accompanied by social development, without which there is no real progress.”