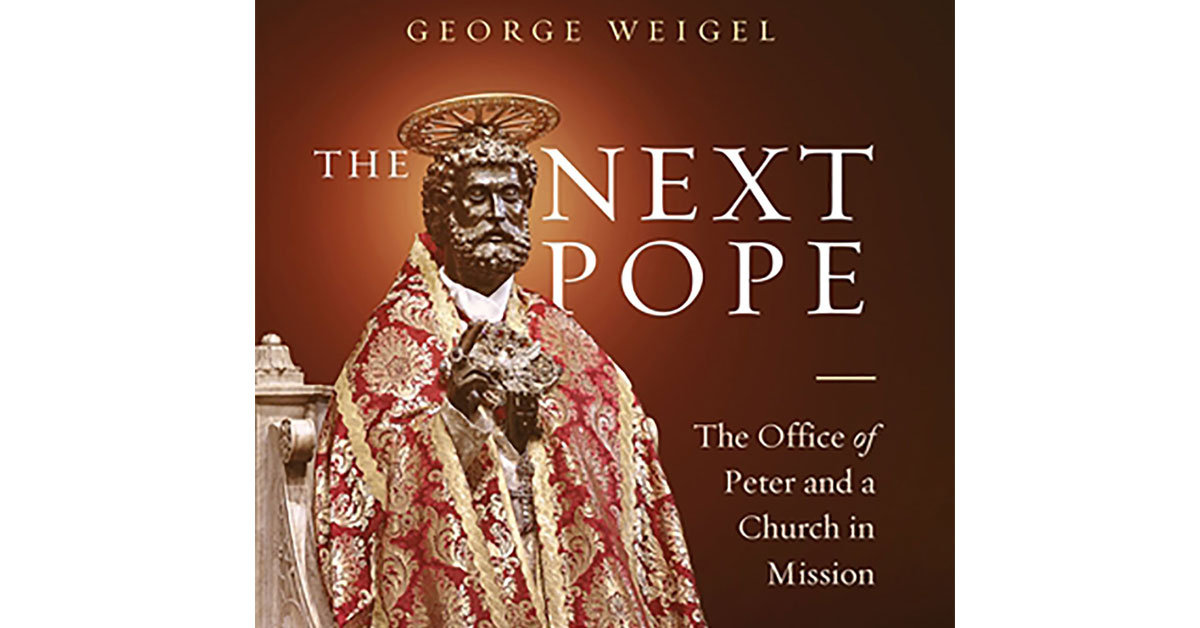 This is the cover of the book “The Next Pope: The Office of Peter and a Church in Mission,” by George Weigel. The book is reviewed by Agostino Bono. (CNS photo/courtesy Ignatius Press)

By Agostino Bono – When it comes to influencing the next papal election, I trust the Holy Spirit over George Weigel.

The Holy Spirit, though, is keeping his own counsel. Weigel, meanwhile, has written “The Next Pope: The Office of Peter and a Church in Mission,” listing the key issues the successor to Pope Francis needs to face and the criteria the future pope should use in dealing with them.

The best thing about this book is that it’s short and simplistic. The list of issues is very good but his discussions of them often avoid their complexities, nuances and controversies. Implied is the need for a conservative-leaning new pope, marching Catholicism to the rear of the Pope Francis era.

Weigel is no stranger to papal topics. He has written a two-volume biography of St. John Paul II and several works on Catholicism. For years, he has been a mainstay at Washington’s Ethics and Public Policy Center.

The book is good on the need to eliminate clericalism, but neglects to mention that Pope Francis has been a key critic. The book makes a good case for radical Vatican institutional reforms that end corruption and financial mismanagement.

Weigel wants the next pope to do this quickly but neglects to mention how hard this is with a centuries-old bureaucracy that knows well how to circle the wagons. Again, there is no mention that Pope Francis has taken major steps in this direction.

The book also sets up several ideological strawmen for the next pope to combat, but without specific examples. We learn that one papal task will be to “help Catholic thinkers resist the temptation to accommodate to the academic fashions of the day, especially in the fields of ‘gender studies,’ ‘queer studies,’ and other idolatries of the self.” Curriculum please.

Criticised is a pastoral method called “Catholic Lite,” defined as “indeterminate convictions and porous behavioural boundaries.” Is this a veiled criticism of Pope Francis’ remark when asked by a journalist how he might react when confessing a gay person: “If a person is gay and seeks out the Lord and is willing, who am I to judge that person”?

When discussing the priesthood, Weigel leaves little room for considering the ordination of married men as Latin-rite priests. There are good arguments on both sides, and it is still a live-wire church topic.

For Weigel, though, the next pope’s job is to support priests by “affirming the gift that priestly celibacy is to the church.” In a chapter on the lay apostolate there is no specific discussion of giving women more responsibilities and positions in the church. He does say, however, that laypeople must have greater consultation in the selection of bishops.

The section on ecumenism reads like veiled allusions to conversion. He notes advances made with mainstream Protestantism in terms of cordial relations, but laments that these have not produced full and visible Christian unity. So, his advice to the next pope: Pivot from mainstream Protestants and turn toward evangelical, Pentecostal and fundamentalist Protestant communities.

But even Weigel notes that this will be hard because these communities are not too keen on dialogue with the Catholic Church, making the prospects for unity with them less likely.

Weigel also belabours the obvious. In one intriguing example he tells us that the only two things a pope “must do” is appoint bishops and meet ambassadors of countries having diplomatic relations with the Holy See. But he quickly adds: “Of these two tasks, the appointment of bishops is more important.” Who would have guessed?

When it comes to electing a new pope, let’s hope the cardinals are guided by the Holy Spirit through prayerful discernment.