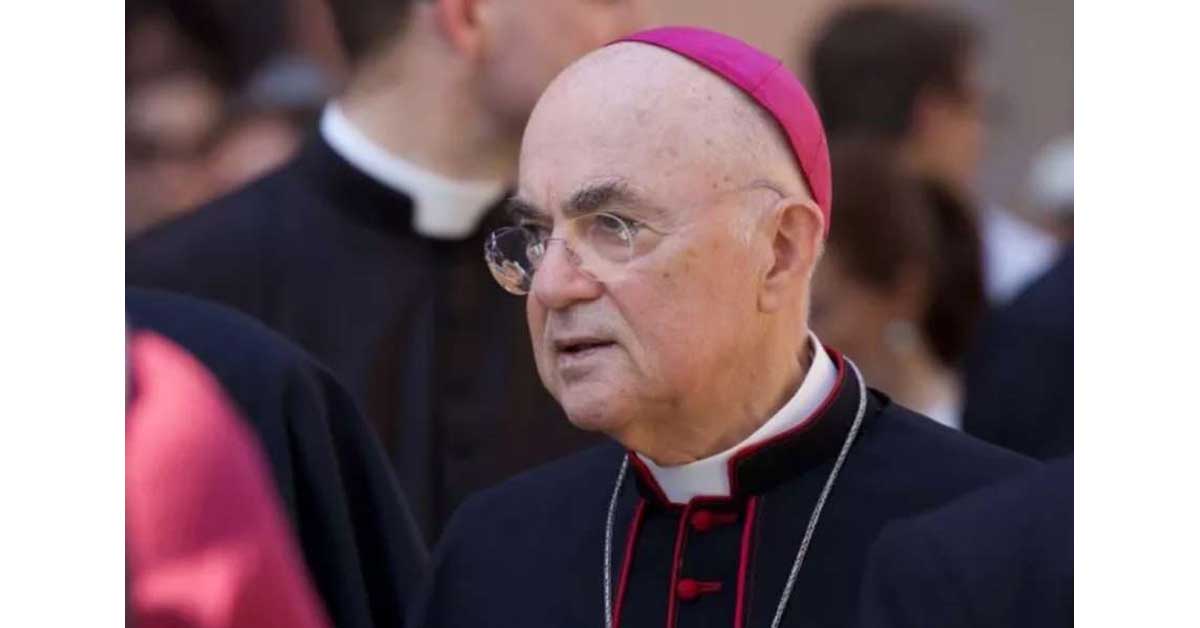 Archbishop Carlo Maria Viganò, who served as apostolic nuncio to the United States from 2011 to 2016, has denied claims in the Vatican’s McCarrick Report which said he failed to act on instructions to investigate Theodore McCarrick.

In a November 12 interview with Raymond Arroyo, host of EWTN’s “The World Over,” the former nuncio said he was not interviewed or asked to share his perspective as the report was being compiled, but was mentioned more than 300 times in the final report, often in a negative light.

This week, the Vatican released a long-awaited report on former cardinal Theodore McCarrick, who was in 2018 acknowledged to have been credibly accused of sexually abusing a minor. McCarrick was subsequently accused of serially abusing and coercing minors, priests, and seminarians, and was laicised in 2019.

The Vatican in 2018 announced an investigation into McCarrick’s decades-long career in the Church, which included ministry as archbishop in two large U.S. archdioceses, and an appointment to the College of Cardinals.

The report, more than 400 pages long, catalogues various reports made about McCarrick to Church officials, some of which were ignored, as well as inaccurate information passed along to the Holy See by three bishops ahead of McCarrick’s appointment as Archbishop of Washington. Viganò said it is clear that the report attempts to shift blame to Pope John Paul II and Pope Benedict XVI. He said the former popes had likely been convinced by officials within the Curia not to believe the rumours surrounding McCarrick.

“Who had an interest in getting McCarrick promoted so that they could gain an advantage in terms of power and money?” he said. “In the case of John Paul II, the main party interested in the promotion of McCarrick was definitely Cardinal [Angelo] Sodano. He was secretary of state until September 2006. All information came to him. In November 2000, he already had received information from Nuncio [Gabriel] Montalvo for this report of the accusation of grave abuse committed by McCarrick.”

In the case of Benedict XVI, Viganò said, Cardinal Tarcisio Bertone “led Pope Benedict to decide that no canonical process should be undertaken, nor should any canonical sanctions be proscribed,” but rather than a mere appeal to McCarrick’s conscience should be made.

In August 2018, Viganò released an 11-page statement claiming that in the late 2000s, Benedict XVI had imposed sanctions on McCarrick. He said McCarrick had been “forbidden to celebrate [Mass] in public, to participate in public meetings, to give lectures, to travel, with the obligation of dedicating himself to a life of prayer and penance.”

Viganò said that he had personally told Pope Francis about these sanctions in 2013, but said Francis not only repealed those sanctions, but made McCarrick his “trusted counsellor,” advising him on several bishop appointments in the United States. Viganò called on Pope Francis to resign over the matter.

The McCarrick Report is at odds with several parts of Viganò’s statement. It disputes what he describes as sanctions placed on McCarrick by Benedict XVI, and points to numerous examples of McCarrick keeping Viganò apprised of his travels and public engagements while Viganò was nuncio. In some cases, Viganò responded by writing to acknowledge and thank McCarrick for his work.

The McCarrick Report also says Viganò failed in 2012 to follow instructions to investigate allegations against McCarrick.

According to the report, Viganò wrote to Cardinal Marc Ouellet, prefect of the Congregation for Bishops, in 2012, informing him of a lawsuit against McCarrick by a cleric identified in the report as “Priest 3.” The report said that Ouellet instructed Viganò, who was then nuncio to the U.S., to investigate whether the claim was credible but Viganò “did not take these steps.”

Viganò rejected the assertion that he had failed to investigate the matter, calling it “absolutely false.” He said the report itself acknowledges written correspondence between him and Bishop Paul Bootkoski of Metuchen, the ordinary of Priest 3, which he forwarded to Cardinal Ouellet in June 2013.

In his interview with Arroyo, Viganò maintained that Pope Benedict XVI had ordered McCarrick to retire and lead a private life, without attending public events, but said corrupt members of the Curia did not enforce these measures.

Contrary to what is stated in the report, Viganò insisted that he did inform Pope Francis directly that McCarrick had corrupted a generation of seminarians and priests, and that Pope Benedict had ordered him to live a life of prayer and penance.

He said his comments had come in response to a direct question from Pope Francis asking what he thought about McCarrick. He said the pope did not act surprised or react at to his words, but changed the subject.

“The disturbing thing is that within the report itself, obviously put together by many hands, there are numerous contradictions – enough to make the argument the report has little credibility,” Viganò said.