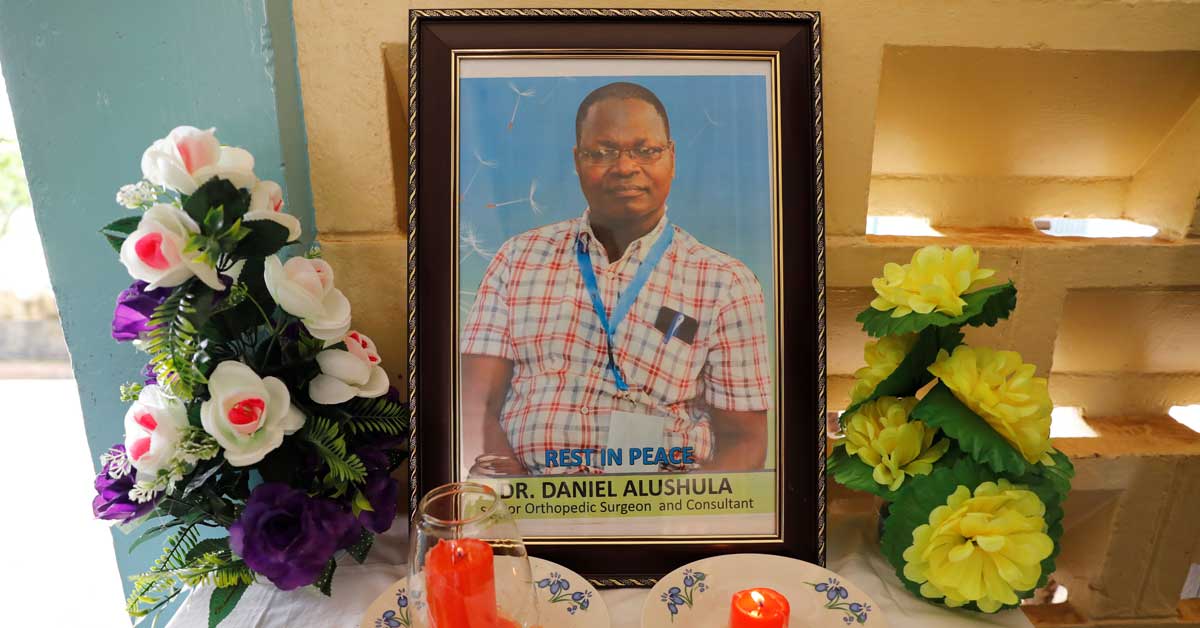 A photo of Kenyan Dr. Daniel Alushula – who died from complications of the coronavirus – is seen at a November 13, 2020, memorial at a hospital in Busia, Kenya. (CNS photo/Baz Ratner, Reuters)

By Fredrick Nzwili – Kenyan bishops are calling for increased support for medical personnel in the Covid-19 pandemic front lines, as reports indicate 25 doctors have died of the disease since March.

Archbishop Philip Anyolo, the Kenya Conference of Catholic Bishops’ chairman, expressed the church’s sadness at the deaths, saying doctors, nurses and other medical personnel were behind the massive recoveries and increased hope being witnessed in the country during the pandemic.

“We cannot continue to watch (as) the only hopes of Kenyan people go down through the loss … of life as we have witnessed in the last few days,” Archbishop Anyolo said in a statement.

In mid-November, as the number of cases surged, four doctors died within 24 hours. So far, 2,200 doctors have been infected with the virus, according to the Kenya Medical Practitioners and Pharmacists and Dentists Union. The country’s total infections stand at more than 75,000.

Archbishop Anyolo said the church is concerned that, despite budget availability and commitment by government leaders, resources have not been provided consistently to support the health care system during the pandemic, leaving health workers exposed and vulnerable.

“We ask the government to move with haste to prioritise the available resources with the government and provide the required facilitation of the health care system,” said the archbishop. He noted health care workers continued to work to save lives despite challenges.

With many of them dying in the line of duty, the doctors said they would go on strike in early December if they do not get better working conditions and personal protective equipment.

The bishops said they want the government to enter into talks with the health care workers’ union, so workers’ concerns can be addressed.