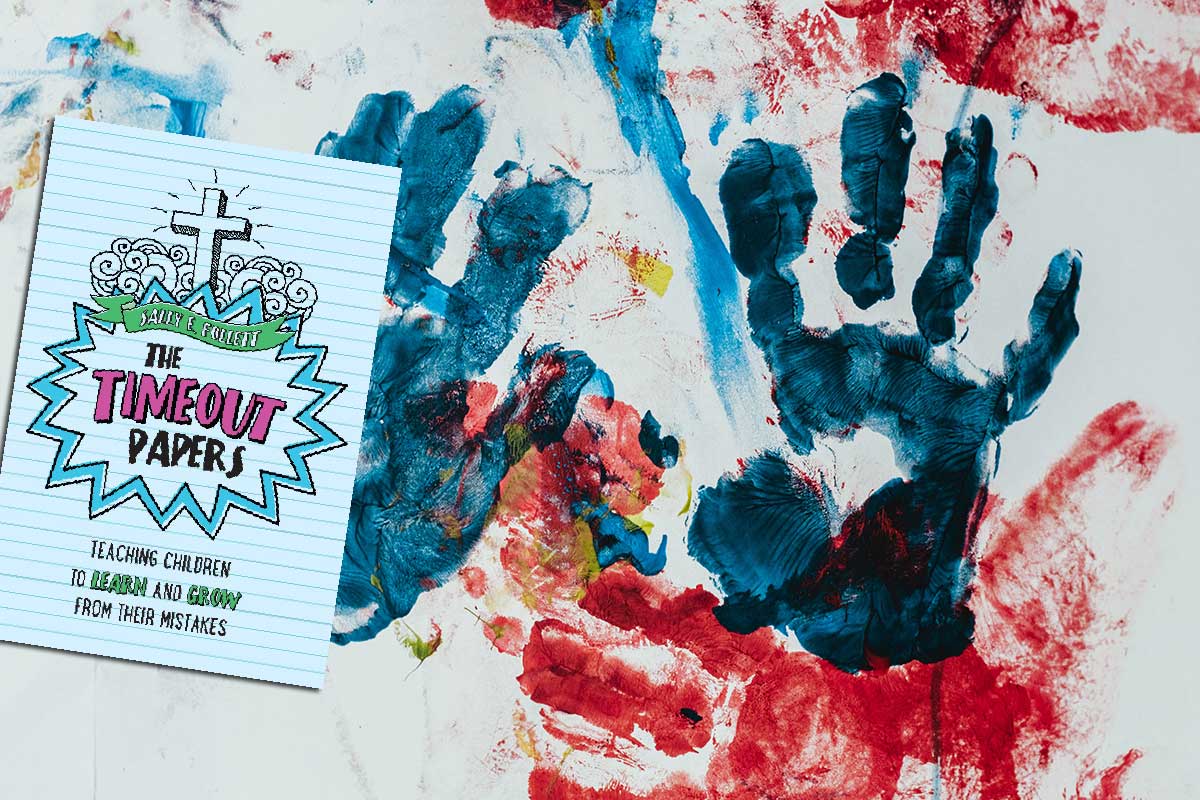 Every child does this, Sally Follett said. Which means every parent has to face these behaviours.

For this northeast Wisconsin mom, loose-leaf pages, with her children’s printing about these faults – preserved for years in a white binder – have become the basis of a new book with a practical, prayerful approach to help parents deal with youngsters’ bad behaviour.

Follett, who lives in the Legend Lake area north of Shawano, Wisconsin, saved those pages that her four children wrote when she tried a unique spin on a timeout for bad behaviour.

They form the crux of “The Timeout Papers,” which features the approach she used to teach her children to learn and grow from their mistakes, to turn to God through prayer, to do better next time, and to bring peace and virtue to their family life.

In fewer than 100 pages, the spiral-bound, purse-sized book tackles behaviours familiar to parents everywhere. Parents of children ages 5 to middle school are the target audience.

In the book’s “Timeout to Write” section, children ages 8 or over, “whose consciences are working well,” as Follett wrote, “and who have fallen into temptation” – lying, cheating, teasing, talking back, etc. – for their punishment, must copy a “timeout paper,” a few brief sentences intended to help them understand what they did was wrong and why it was wrong.

The discipline includes copying a brief prayer, such as, for a child caught lying, “Dear God, give me the courage to tell the truth even when it means I will be punished.”

Follett, who belongs to Sacred Heart Parish in Shawano, wrote both the simple essay and the prayer for each of the topics addressed.

Although they wanted to have children, Sally and Scott Follett weren’t able to conceive for the first 10 years of their marriage. Once they had adopted, the couple had three babies of their own.

One day, when the oldest were 7 and 8 and misbehaving, Sally was so upset with them she didn’t know what to do.

“I remember getting really angry,” she told The Compass, newspaper of the Diocese of Green Bay. And she found that incongruous “when I (had) wanted children so badly for so long.”

She locked herself in the bathroom. Shortly after, the boys came knocking on the door looking for her.

She doesn’t claim credit for the “timeout to write” idea that she calls “punishment without tears” and “a working catechism for kids.”

One day, while trying to keep from getting angry at one of the boys, Follett said, “I put my head down and said, ‘God, what should I do?’ In a flash, I had an awareness that the answer was to write down what he did wrong and have him write that down.”

Follett said every parent — “Well, maybe not the Blessed Mother,” she quipped — gets frustrated with their children’s behaviour, not knowing what to do. “Parenting is a learning process,” she admitted.

“Almost every kid does everything in this book, and that means every parent has to face them, too,” she said. “My kids said it was a better alternative than being hollered at or lectured to.”

The book advises parents of younger children to read the brief, one- or two-sentence paragraph to help them understand that what they did was wrong, having the child repeat each line as the parent reads it.

Each of the timeout papers, along with the short prayer, includes a quote from Scripture.

“The times I felt God the most was when I felt hurt or I did something wrong,” Follett explained. “So why not teach that to children when they are young?

“The prayer to invite the Holy Spirit in, to try to do better next time, is huge,” she said. “And I tried to choose Scripture verses that would also encourage, not just discourage.”

Not included in the original timeout papers from her children are “Timeout to Reward” papers. The section was added, Follett said, because “we need to catch our kids doing more things right,” such as demonstrating humility and doing something for others.

Since her children are now 25, 24, 19 and 17, Follett was done homeschooling and had time to “put the book idea out there,” she said. “Three or four close friends had copies of the papers and had used them because they saw them in action.”

Those friends found them to be effective, and Sophia Institute Press – www.sophiainstitute.com – accepted the book almost instantly.

“I think God wanted me to do this for other families,” Follett said, “to show them this is how you can do it right.”

She added to the 20 or so papers she had kept in the binder by remembering other issues she had talked about with her children, often during car rides. Newer topics include such things as listening to bad music, looking at immoral things, using unacceptable apps, bullying and belittling others.

“All of us have done wrong, so we need to be gentle and guide others to the right path,” she said. “That’s the parents’ job. Making the decision not to get hot and heavy (when a child needs to be disciplined) is probably the most important decision a parent can make.”

Can A School Be ‘Catholic’ Online?

How To Manage Kids And Screens

Pope: Time Is Running Out To Fix Economy, Protect The Earth, Help The Poor
Share