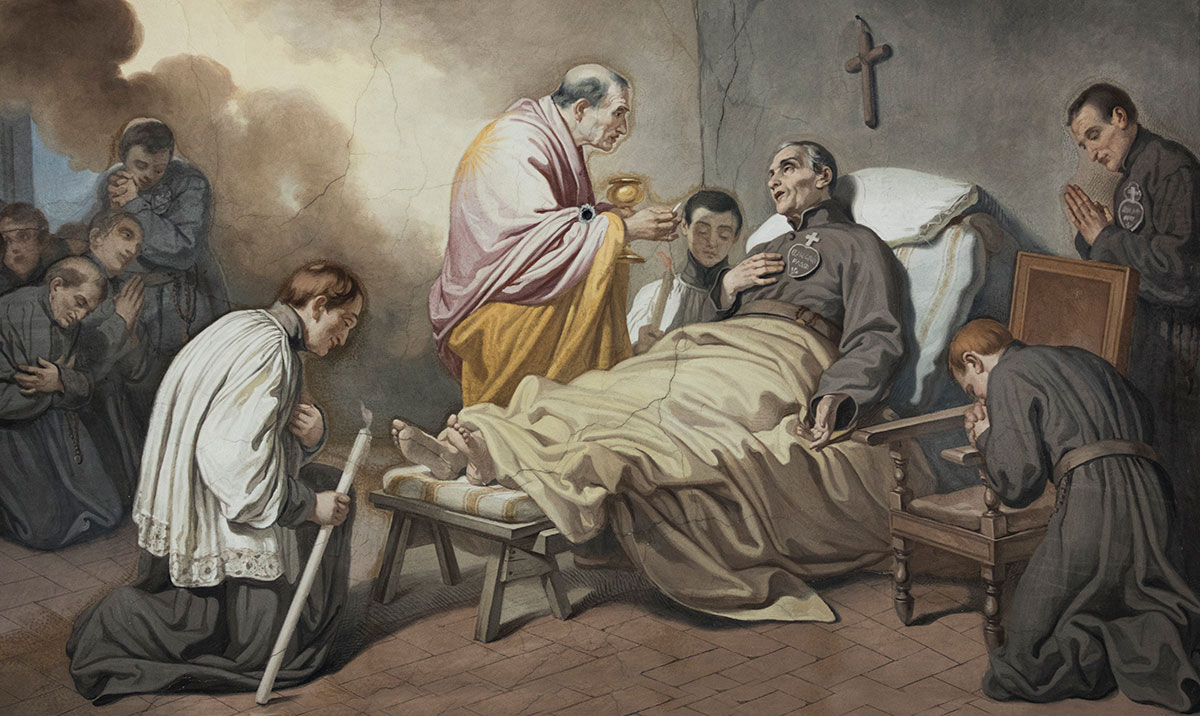 St. Paul of the Cross, founder of the Passionist Fathers, is seen on his deathbed in this artwork provided by the order. The Passionist Fathers will commemorate the 300th anniversary of their founding by St Paul with a jubilee celebration that begins November 22 with the opening of a Holy Door and Mass in Rome. (CNS photo/courtesy Passionist Fathers)

By Junno Arocho Esteves – The Passionist Fathers will commemorate the 300th anniversary of their founding with a jubilee celebration centred on renewing the commitment to proclaiming Christ’s Passion as a sign of hope and love for humanity.

In a statement released November 18, the congregation said the celebration will begin with the opening of the Holy Door at Rome’s Basilica of Ss John and Paul followed by a Mass presided by Cardinal Pietro Parolin, Vatican secretary of state.

The date of the Mass, November 22, marks the day when St. Paul of the Cross, founder of the Passionists, “abandoned his commercial activity, and began a 40-day retreat in a cell of the church of San Carlo in Castellazzo during which he wrote the rule of the future congregation,” the Passionists said.

The jubilee celebration will conclude the same day the founder ended his retreat 300 years ago on January 1.

Although the Covid-19 pandemic has prevented any other public celebrations to mark the jubilee, the congregation will host an international congress at Rome’s Pontifical Lateran University that will reflect on the theme, “The wisdom of the cross in a pluralistic world.”

While the current pandemic “has impeded or postponed pilgrimages and meetings of the Passionist family, the jubilee maintains its value of personal commitment to renewal,” the congregation said.

“Indeed, the grace of the jubilee is to offer a new beginning, and new opportunities for a fulfilling life,” the statement said. “If the explosion of Covid-19 has made us say, ‘Nothing will be as it was before,’ the jubilee offers us energy so that ‘nothing will be as it was before’ because everything is renewed on personal and social levels, as Pope Francis desires.”

Since its founding, the congregation has spread to 63 countries across five continents. The Passionist Fathers first arrived in South Africa in 1955.