Pope: Communities that Take their Own Path Lack the Holy Spirit 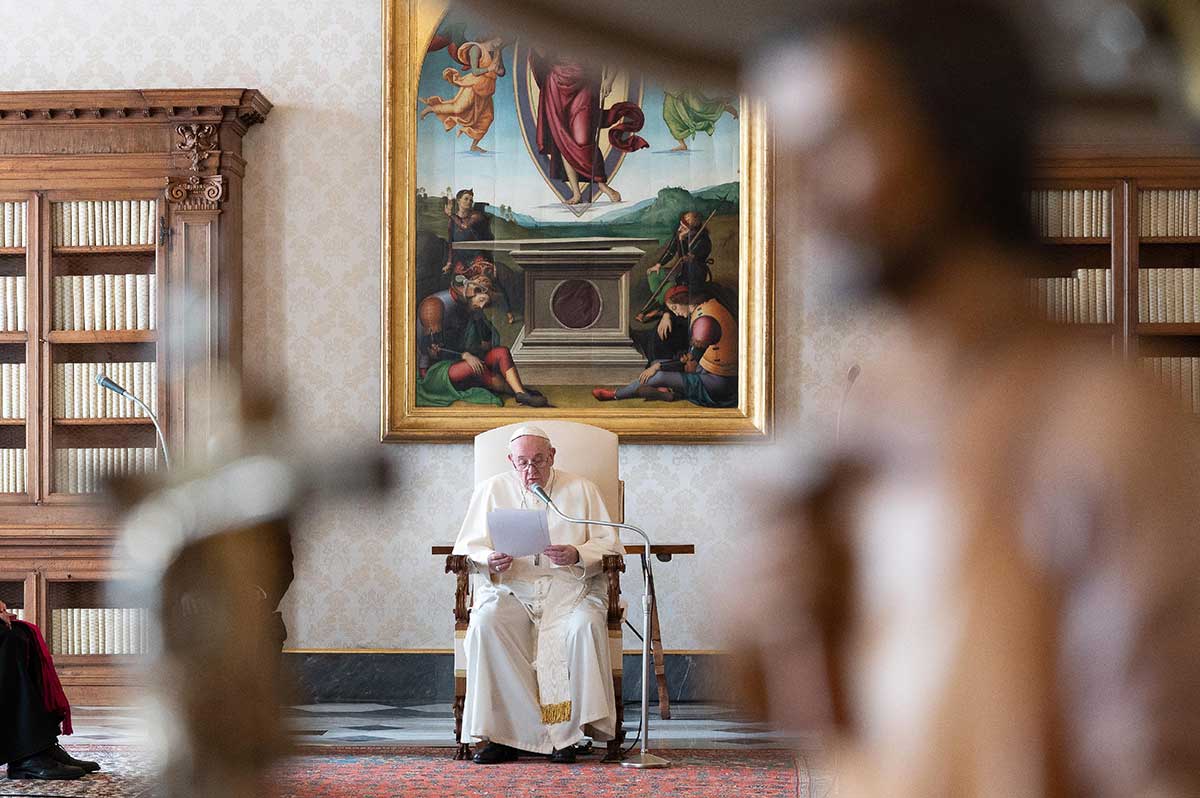 Pope Francis leads his general audience in the library of the Apostolic Palace at the Vatican Nov. 25, 2020. (CNS photo/Vatican Media)

By Junno Arocho Esteves -Pope Francis said he was dismayed by Catholic communities and groups that claim to be working to improve church life, but attempt to do so without prayer, the Eucharist and unity with the rest of the church.“At times, I feel a great sadness when I see a community that, with goodwill, takes a wrong path because it thinks it is making the church through gatherings, as if it were a political party: the majority, the minority, what this one thinks of this or that or the other, (saying), ‘This is like a synod, a synodal path that we must take,'” the pope said Nov. 25 during his weekly general audience.

While the pope did not mention a specific country or situation, already in June 2019, he had written a letter to Catholics in Germany urging them to ensure that their “synodal path” was guided by the Holy Spirit with patience and was not simply a “search for immediate results that generate quick and immediate consequences but are ephemeral due to the lack of maturity or because they do not respond to the vocation to which we are called.”

The Catholic Church in Germany launched the Synodal Path in 2019. Scheduled to run for two years, it is debating the issues of power, sexual morality, priestly life and the role of women in the church.

The aim is to restore trust lost in the clergy abuse scandal after the German bishops’ conference released a study that revealed an estimated 3,700 cases of sexual abuse reported in the German church from 1946 to 2014.

The statistics prompted outrage in the general public, and the German bishops held several meetings to discuss reforms; some of the suggestions included reviewing the church’s discipline on priestly celibacy, reviewing church law, promoting more women in church administration and reviewing Catholic teaching on sexual morality.

But some German bishops are concerned about the process. In an interview published Sept. 17 by Germany’s Catholic news agency, KNA, Cardinal Rainer Maria Woelki of Cologne warned that the Synodal Path reform project could lead to a “German national church.”

“The worst outcome would be if the Synodal Path leads to a schism … with the universal church,” Cardinal Woelki said. “That would be the worst thing if something like a German national church were to be created here.”

In his audience talk, the pope said that in order “to evaluate a situation, whether it is ecclesial or not, we must ask ourselves if there are these four coordinates: community life, prayer, the Eucharist and preaching.”

If one of those aspects is missing, he said, then the presence of the Holy Spirit is missing, which risks converting the Catholic Church into “a beautiful humanitarian association,” but “it is not the church.”

Discussions and negotiations do not lead to the growth of the church, he said. “It grows by attraction. And who creates that attraction? The Holy Spirit,” Pope Francis said, echoing the words of retired Pope Benedict XVI.