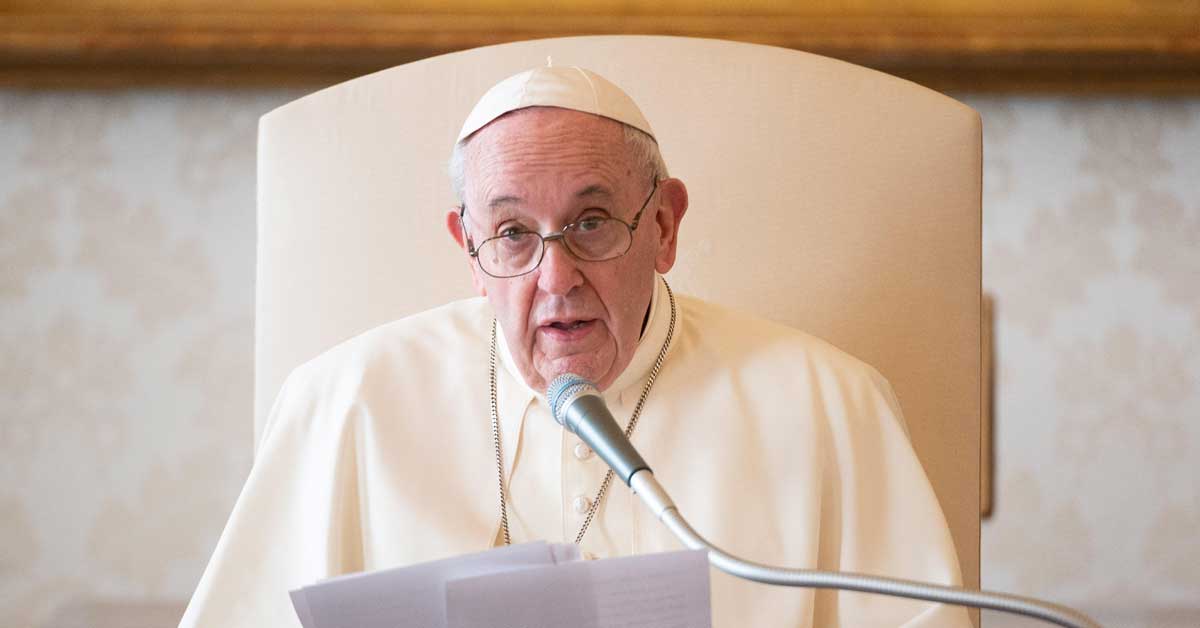 By Cindy Wooden – Pope Francis admits he is not an economist, but he is a pastor.

And as a pastor, he has seen how the global economy has cast aside many members of his flock, and he knows that the Gospel and Catholic social teaching call for a different response.

“Solidarity is not the sharing of crumbs from the table, but to make space at the table for everyone,” Pope Francis said in a new book written with Austen Ivereigh.

The book, “Let Us Dream: The Path to A Better Future,” was to be published Dec. 1 by Simon & Schuster. Journalists were given copies in advance.

The pope’s concerns about the current situation of the world, especially given the coronavirus pandemic, will not be new to anyone who followed his homilies as the pandemic developed in the spring, watched his weekly general audience series on Catholic social teaching or read his new encyclical, “Fratelli Tutti, on Fraternity and Social Friendship.”

But the new book sets out systematically how he takes the “see-judge-act” method of social action — what he calls “contemplate-discern-propose” — and uses it to describe the current state of affairs, to look at attitudes behind many issues and to call for a new way of doing things.

Part of the new book, Ivereigh said, is based on Pope Francis’ recorded responses to his written questions and part on suggestions outlined by the pope, elaborated by Ivereigh and then redacted by the pope.

The COVID-19 pandemic has been a global trauma or trial, Pope Francis said, and it is precisely how one acts in a trial that reveals the state of his or her heart: “How solid it is, how merciful, how big or small.”

“God asks us to dare to create something new,” he said. “We cannot return to the false securities of the political and economic systems we had before the crisis. We need economies that give to all access to the fruits of creation, to the basic needs of life: to land, lodging, and labor.”

And, he said, “we need a politics that can integrate and dialogue with the poor, the excluded and the vulnerable, that gives people a say in the decisions that impact their lives.”

In other words, the pope said, “we need to slow down, take stock and design better ways of living together on this earth.”

The only way to get a proper perspective, he said, is to go to the margins of society, to the places where people suffer most and allow that suffering to touch one’s heart.

“I think often of persecuted peoples: the Rohingya, the poor Uighurs, the Yazidi – what ISIS did to them was truly cruel – or Christians in Egypt and Pakistan killed by bombs that went off while they prayed in church,” he said.

The pope’s prescription is centred on dialogue, a recognition of the God-given dignity of every human being and an understanding that the Earth and all the good it contains were meant by God to be a gift for everyone, not just those strong enough to grab the most the quickest.

“I cannot stay silent over 30- to 40-million unborn lives cast aside every year through abortion,” he said. “It is painful to behold how in many regions that see themselves as developed, the practice is often urged because the children to come are disabled, or unplanned.”

“Human life is never a burden. It demands we make space for it, not cast it off,” Pope Francis insisted.

“Of course,” he said, “the arrival of a new human life in need — whether the unborn child in the womb or the migrant at our border — challenges and changes our priorities. With abortion and closed borders we refuse that readjustment of our priorities, sacrificing human life to defend our economic security or to assuage our fear that parenthood will upend our lives.”

To claim “to promote the Gospel and not welcome the strangers in need, nor affirm their humanity as children of God, is to seek to encourage a culture that is Christian in name only, emptied of all that makes it distinctive,” Pope Francis said.

Abortion, anti-immigrant sentiments, racism, lack of care of the elderly and the embracing of an economic system that focuses on profit at all costs are all signs of the “erosion of the value of life,” he said.

“Without a vision for society rooted in the dignity of all people,” he said, “the logic of the unfettered market ends up turning life from a gift into a product.”

As he did in a letter in April to grassroots workers’ cooperatives, Pope Francis said in the book that he believes “it is time to explore concepts like the universal basic income (UBI), also known as ‘the negative income tax’: an unconditional flat payment to all citizens, which could be dispersed through the tax system.”

The payment would guarantee every citizen has the minimum necessary to survive and, he said, could encourage people to job share with others, increasing employment, or give more time to volunteer work.

Pope Francis urged people to pause and look around for something new and different they could do to help someone else.

“When you feel the twitch, stop and pray,” he said. “And then act. Call up, go visit, offer your service. Say you don’t have a clue what they do, but maybe you can help. Say you’d like to be part of a different world, and you thought this might be a good place to start.”