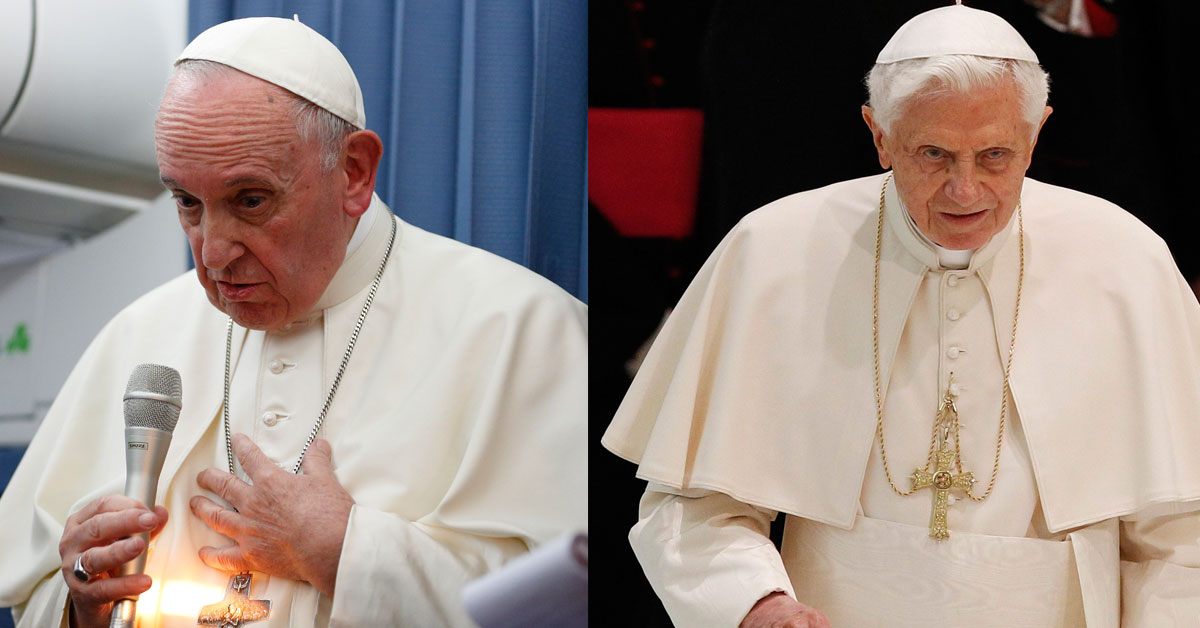 9Right) Pope Benedict XVI uses a cane as he arrives for an audience with pastors of the Diocese of Rome at the Vatican in this Feb. 14, 2013, file photo. A report released Nov. 10 about former Cardinal Theodore E. McCarrick states that both Pope Francis and retired Pope Benedict were formally interviewed by Vatican investigators for the report. (CNS photo/Paul Haring)

By Cindy Wooden – In an unusual move, both Pope Francis and retired Pope Benedict XVI subjected themselves to questioning by Vatican investigators charged with compiling a report on how church decisions were made regarding the career and ultimate expulsion of Theodore E. McCarrick.

“Pope Francis was questioned closely regarding the 23 June and 10 October 2013 meetings” during which Archbishop Carlo Maria Vigano, former nuncio to the United States, claimed he told Pope Francis about McCarrick’s history of sexual misconduct and about supposed sanctions imposed on him by Pope Benedict, said the report released November 10.

The footnotes indicate that McCarrick himself also was among the more than 90 people interviewed for the report. Archbishop Vigano, who claimed to have gone into hiding after making his accusations against Pope Francis in 2018, apparently was not. The report refers only to his 2018 statement and to documents and letters written by him and available in archives at the Vatican and the nunciature in Washington.

In the interviews, “Pope Francis did not recollect what Vigano said about McCarrick” during the two 2013 meetings with Archbishop Vigano, the report said. “However, because McCarrick was a cardinal known personally to him, Pope Francis was certain that he would have remembered had Vigano spoken about McCarrick with any ‘force or clarity.'”

The pope also said he was “certain that Vigano never told him that McCarrick had committed ‘crimes’ against any person, whether adult or minor, or described McCarrick as a ‘serial predator’ or stated that McCarrick had ‘corrupted generations of seminarians and priests,'” as Archbishop Vigano claimed in 2018.

“Prior to the allegation made to the Archdiocese of New York in 2017, the pope was never informed by anyone that McCarrick had sexually abused or assaulted any person, irrespective of age,” the report said.

When the Archdiocese of New York found credible a charge that McCarrick sexually abused a teenage boy, the Vatican suspended him from ministry in June 2018. McCarrick resigned from the College of Cardinals in July, and in February 2019, after a canonical process found McCarrick guilty of “solicitation in the sacrament of confession and sins against the Sixth Commandment with minors and with adults, with the aggravating factor of the abuse of power,” Pope Francis dismissed him from the priesthood.

The report indicates that Pope Francis was questioned not only about the accusations made by Archbishop Vigano, but also more generally about his knowledge of and interactions with McCarrick over the years.

“Pope Francis recalled in an interview that he had first heard of Archbishop McCarrick from McCarrick’s involvement in South American church affairs during the 1990s, when he (then-Archbishop Bergoglio) was invited to attend a large dinner of ecclesiastics organised by McCarrick. Bergoglio, who tended to shy away from gatherings of this nature, declined the invitation and did not meet him until sometime later,” the report said.

However, then-Archbishop Angelo Becciu, recently forced by Pope Francis to give up the rights and privileges of being a cardinal because of his involvement in alleged financial misdeeds, told the investigator “he mentioned to Pope Francis the existence of old allegations related to McCarrick in 2013 and then again at some point between 2014 and 2016,” as well as restrictions or “indications” that McCarrick should be keeping a low profile.

“Pope Francis remembered a brief exchange” with Archbishop Becciu regarding McCarrick. “He recalled Archbishop Becciu asking rhetorically, ‘But what is McCarrick doing here? He should not be coming around,'” the report said. “Pope Francis stated that Becciu did not elaborate on what the prior indications related to, other than to say that it ‘was something from the distant past’ that had been ‘gossiped about’ and that Becciu had heard about while he was in the nunciature in the United States,” where he served before being named nuncio to Angola in 2001.

“Pope Francis recalled having supposed that any allegations against McCarrick already in existence in 2000 must have been deemed without foundation because ‘John Paul II was a man so morally strict, of such moral rectitude, that he would never have permitted a rotten candidacy to move forward.'”

The footnotes in the Vatican document said that “Pope Emeritus Benedict XVI, who reviewed the report related to these events (regarding the resignation of McCarrick as archbishop of Washington in May 2006), found the contents to be consistent with his own recollections.”

“Through Archbishop Georg Ganswein,” his personal secretary, “the pope emeritus recalled that there were suspicions regarding McCarrick’s prior misconduct but a dearth of concrete evidence,” the report said. “The pope emeritus recollected that the request that McCarrick resign as archbishop of Washington was intended to send McCarrick a ‘clear signal’ of disapproval,” since Pope Benedict previously had asked him to stay on until 2007.

In the spring of 2008, Richard Sipe published an open letter to Pope Benedict, “About the Pattern of the Sexual Abuse Crisis in the United States,” including allegations about McCarrick involving seminarians and priests, all of whom were adults.

Cardinal Giovanni Battista Re, then-prefect of the Congregation for Bishops, wrote McCarrick in June 2008, asking him to move out of the seminary where he had an apartment and to “conduct a quiet life of prayer and penance for past imprudent actions.”

The report said Cardinal Re “did not invoke Pope Benedict XVI’s name or indicate that the letter reflected a directive from the pope and did not set forth any formal order or prohibition on public ministry.”

“Through Archbishop Ganswein,” the report said, “Pope Emeritus Benedict XVI recalled receiving Cardinal Re in audience, being briefed on the situation regarding Cardinal McCarrick by Cardinal Re and reviewing Re’s 14 June 2008 letter to McCarrick. The Pope Emeritus also recalled approving the approach taken in Cardinal Re’s letter.”

Cardinal Tarcisio Bertone, secretary of state under Pope Benedict, told the investigator that he discussed “Problems relating to Cardinal Theodore McCarrick” with Pope Benedict during a meeting in January 2007. “Cardinal Bertone stated that the Holy Father ‘was worried about McCarrick’ and wished that McCarrick’s activities be contained in some manner, but did not believe that the path of formal investigation by CDF (Congregation for the Doctrine of the Faith) should be taken at that point.”