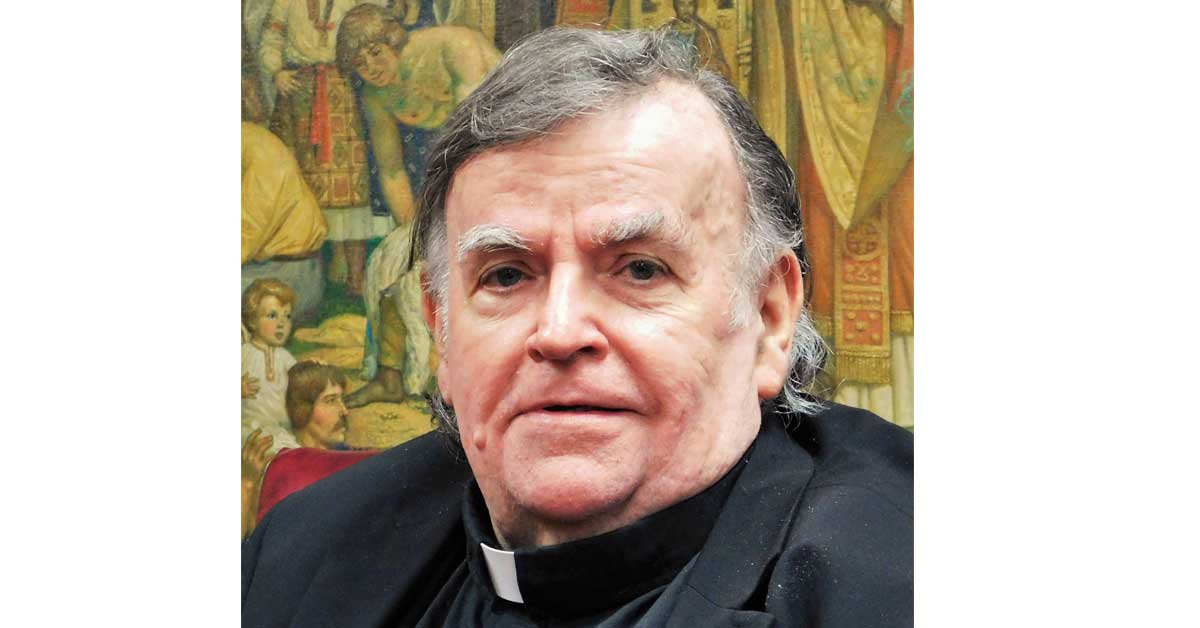 Father John Fields, an archpriest of the Ukrainian Catholic Archeparchy of Philadelphia who is director of communication for the archeparchy, is shown in an undated photo. On Aug. 31, 2020, Father Fields received his first injection in the vaccine trials for Moderna Inc.’s Covid-19 vaccine as part of a study group at the University of Pennsylvania. (CNS photo/courtesy Father John Fields)

By Julie Asher – When Father John Fields received an email from the University of Pennsylvania August 28 asking him if he wanted to participate in the third and final phase of Moderna’s Covid-19 vaccine trial, he answered “yes” immediately.

“I did not hesitate. For me, it was a go. I just hoped I would be accepted,” he said in a November 17 email to Catholic News Service.

“It would be a great opportunity to fight this pesky virus that suddenly appeared and wreaked havoc throughout the world, bringing death and disrupting every aspect of our lives,” said Father Fields, an archpriest of the Ukrainian Catholic Archeparchy of Philadelphia, who is director of communication for the archeparchy.

“Several years ago, I anointed one of my former parishioners from Frackville, Philadelphia, who was dying of cancer at the hospital of the University Pennsylvania,” he recalled. “He knew his cancer was terminal but signed up for an experimental cancer research study at Penn. Even to this day, I think of his courage and bravery while he was at death’s doorstep.”

On November 16, Moderna said preliminary data from the phase three trial shows its coronavirus vaccine is 94.5% effective in preventing Covid-19. It’s the second vaccine in the United States to have “a stunningly high success rate,” as CNN described it. The first is a vaccine by Pfizer, which announced Nov. 11 its vaccine is 95% effective.

Moderna developed its vaccine in collaboration with the National Institute of Allergy and Infectious Diseases. The analysis of the study showed 95 confirmed Covid-19 infections among the trial’s 30,000 participants: 90 confirmed cases in the placebo group versus five cases observed in the group that received its two-dose vaccine.

The study team that reached out to Father Fields was looking for volunteers who were middle age to early 70s, “since that was deemed the higher risk group for the Covid-19 virus,” said the priest, who is 70.

He was accepted into the trial at the University of Pennsylvania and was the first volunteer in the study at Penn, receiving his first injection Aug. 31. He was tested for Covid-19 the same day with a nasal swab – the result was negative – and had blood drawn for the study.

“During the first week, each day I had to report my temperature and any symptoms – fatigue, nausea, injection site pain, arm swelling, chills or fever, headaches. I had none,” he said. On October 1, he got his second injection, more blood draw and another Covid-19 nasal swab test – which was negative. Again, he felt no symptoms.

On October 26, he returned for a follow-up evaluation and to get more blood drawn. He’ll continue to be evaluated for period of 25 months; his next evaluation is already scheduled for March 2021.

“I never had any concern about the risks. I thought it was a win-win situation,” Father Fields told CNS, adding that his participation and the injections “posed no risk to anyone that I may have been near or in contact with.”

By being in the study, he said, “I may be able contribute in some small way to the development of an effective vaccine that would help stop this worldwide Covid-19 pandemic and the fear, suffering and death that it has already caused to millions and end the shutdowns and help restore society once again to a normal lifestyle.

“And hopefully, if I did not get a placebo and actually received the vaccine that subsequently receives approval, I would be among the first to benefit from the medical breakthrough of the Moderna vaccine.”

He said as a volunteer in the Moderna study group at the University of Pennsylvania, he found the news of the effectiveness of the company’s vaccine “very encouraging and am pleased that I had the opportunity to participate.”

“I think of the researchers, who in only several months, as part of Operation Warp Speed, collectively used their knowledge and wisdom from Almighty God to achieve this medical milestone,” Father Fields told CNS.

“And I am reminded that alone my involvement is insignificant, but combined with the almost 30,000 other volunteers throughout the United States in the Moderna study,” he said, “collectively we may have helped to defeat this deadly virus and prevent millions of deaths throughout the world. For this, I am grateful to God, for this opportunity.”

In May, the Trump administration launched Operation Warp Speed, the moniker of its initiative to deliver Covid-19 vaccines to Americans as quickly as possible. The program has funded the manufacturing of six promising vaccine candidates, two of which are the ones announced by Moderna and Pfizer.

As soon as the Food and Drug Administration approves the vaccines for distribution, Operation Warp Speed hopes to distribute 300 million doses around the country by January. Because Moderna and Pfizer’s vaccines involve two shots per person, this would be enough to immunise 150 million Americans.

Priest: This Year, We Can Recognise Gethsemane In The Whole World
Share