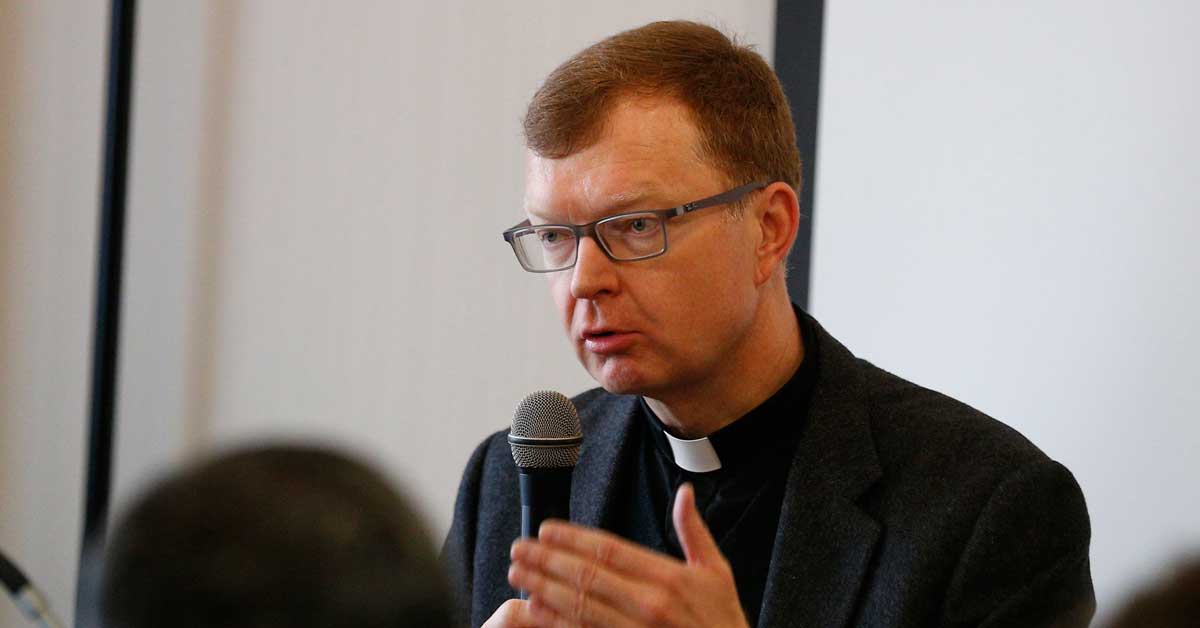 Jesuit Father Hans Zollner, president of the Centre for Child Protection at the Pontifical Gregorian University in Rome, leads a briefing for journalists in Rome in this Feb. 12, 2019, file photo. Father Zollner said that certain criteria must be met when considering whether a lay movement with cases of abuse should be reformed or dissolved. (CNS photo/Paul Haring)

By Junno Arocho Esteves –  For decades, lay movements and communities have given countless Catholics a chance to rediscover and deepen their faith.

Yet, while many bring people closer to God, questions have been raised about the influence some lay groups exercise over their members and about how the church should determine whether the movement should be reformed or dissolved when there is abuse or corruption.

In his 1998 message for the World Congress of Ecclesial Movements and New Communities, St. John Paul II recognised their importance and said lay movements were “one of the most significant fruits of that springtime in the church which was foretold by the Second Vatican Council.”

But not all the fruit was good. And several movements and communities have faced Vatican-imposed reforms and even dissolution.

Jesuit Father Hans Zollner, a professor of psychology and president of the Centre for Child Protection at the Pontifical Gregorian University in Rome, told Catholic News Service Nov. 4 that before deciding to dissolve a movement or community, certain criteria should be met to indicate reform is possible.

“One condition would be how much that community or that movement is really willing to revise its statutes and its way of proceeding under the guidance of someone external,” such as a commissioner, Father Zollner told CNS.

A key issue, he said, is a willingness to have a clear separation of “spiritual guidance and external power” when it comes to decision-making.

“A spiritual director should never have the power to direct the movement or a decision for a person,” he said. “There needs to be a separation between who decides the mission aspect (‘forum externum’) and who knows about the spiritual side (‘forum internum’). This is a very important point which some of those movements and some of those religious congregations have not been taking seriously, against the tradition and the law of the church.”

Perhaps surprisingly, the Catholic Church has a limited number of options for intervening when it comes to lay movements and communities. While a pope can remove cardinals, priests and bishops, laypeople can be punished only by excommunication.

Another condition, Father Zollner said, is that there must be a set period of time — preferably between three and five years — for changes to be implemented and that a person not affiliated with the movement must determine whether the conditions of the reform have been met.

The movement itself “can’t be the one to testify that they have changed because then you blow your own trumpet and people will question that,” he said, “and rightfully so.”

The situation of the Sodalitium Christianae Vitae, a Catholic movement founded by Luis Fernando Figari in Peru in 1971, provides one example of the difficulty of deciding whether to push for reform or move toward suppression.

In 2015, Peruvian journalists Paola Ugaz and Pedro co-authored a book titled, “Mitad Monjes, Mitad Soldados” (“Half Monks, Half Soldiers”), which detailed the alleged psychological and sexual abuse, as well as corporal punishment and extreme exercises, that young members of Sodalitium Christianae Vitae were forced to endure.

A 2017 internal investigation found that Figari and three other high-ranking former members abused 19 minors and 10 adults.

Although Pope Francis has named U.S. Cardinal Joseph W. Tobin of Newark, New Jersey, as delegate and Colombian Bishop Noel Antonio Londono of Jerico as “apostolic commissary” to oversee the movement and its reforms, Ugaz and Salinas continue to face a steady stream of legal troubles from current and former members of Sodalitium.

Both were sued in 2019 by Peruvian Archbishop Jose Eguren Anselmi of Piura, a professed member of Sodalitium since 1981. The prelate later dropped the lawsuits after facing considerable backlash from the public and the Peruvian bishops’ conference.

The strongest denunciation against Sodalitium, however, came from Peruvian Cardinal Pedro Barreto Jimeno of Huancayo, who said that Sodalitium Christianae Vitae and any other religious movement mired in sexual abuse should be dissolved.

“Personally, I think that when a religious organisation has committed a crime, because it has to be said that way – from the point of view of sexual abuse and the economic side where there are also problems — it has to be dissolved,” he said in an interview with Peruvian radio station Radio Santa Rosa in early March.

“The fundamental problem is that the founder – and I say this with much pain and sorrow and I have said it on another occasion — is a perverted person, and such a person cannot transmit the holiness of life that Pope Francis himself has expressed in one his apostolic exhortations,” he said.

Ugaz told CNS November 3 that personal attacks against her and Salinas have worsened, that there are five lawsuits currently against her, and that she received an anonymous threat that read, “You are going to die all (covered in) red if the Peruvian ‘Charlie Hebdo’ comes; we will smoke you out with lead,” referencing the 2015 terrorist attack in France, when gunmen stormed the offices of the controversial satirical newspaper and killed 12 people.

Still, Ugaz said she has felt encouraged by support from the Peruvian bishops’ conference and by Peruvian Archbishop Carlos Castillo of Lima.

No matter what actions the church should or will take when it comes to Sodalitium, Ugaz said the Catholic Church must always place the well-being and the psychological and spiritual care of survivors first.

On Holy Thursday 2019, she recalled, Archbishop Castillo washed the feet of Jose Rey de Castro, “one of the victims who suffered the most at the at the hands of Figari.”

Holding back tears, Ugaz said that during his time in Sodalitium, Rey de Castro was forced to not show any emotions or facial expressions. Yet, after the archbishop washed his feet, she saw him smile for the first time.