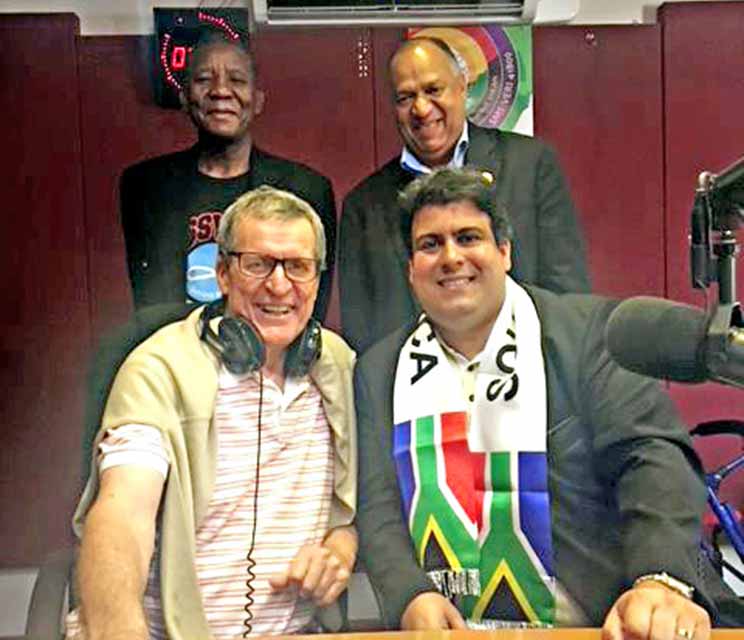 I would like to give a short history of who Fr. Emil was. I am sure those who worked with him during his days in Khanya House would describe him better than me.

This morning as Khanya House Staff members would like to offer this special Mass for the later Fr Emil Blaser, a member of Dominican Community – Our sincere condolences, a big tree has fallen!

Fr. Emil Blaser took office as the SACBC Associate Secretary-General in mid-1992, when he replaced Sr. Brigid Flanagan, a Holy Family Sister. He held the position up until 1997 when Fr Richard Menatsi was appointed to the same office during January Plenary session.

The office of the SACBC Associate Secretary-General had many portfolios, but Fr. Emil prominently features in our records in matters pertaining to the Office for Social Communications.

Early in 1993, the SACBC sought to appoint a full-time secretary for the Office for Social Communications. In spite of his other duties as the associate secretary general, Fr. Emil shouldered a lot of responsibilities in that office – in the absence of the required Secretary. He subsequently took a leading role in the dissemination of the Christian messages through mass media platforms that were available at the time. Public broadcasters such as the SABC and M-Net allocated radio and television airtime for weekly religious programs and Fr. Emil was at the forefront of the production and presentation of the Catholic Church programs.

In early 1996 the SACBC Bishops decided that Fr. Emil should become a full-time head of the Office for Social Communications, but that decision had to be delayed as there was a delay in appointing a new Associate Secretary-General. Influence by the demand of the new office he had also tried to resign from the office of the Associate Secretary-General in pursuit of his growing involvement in Social Communications activities, but his attempt was not successful.

From 1997 onwards Fr. Emil continued to serve the SACBC as Secretary of the Office for Social Communications where some of his prominent tasks included setting up a Catholic Community Radio (Radio Veritas); producing and conducting media presentations; and making sure that other SACBC Radio and television presenters were adequately trained on their roles. This was his passion. He also served on the Religious Broadcasting Panel and was also a board member of the Independent Forum for Religious Broadcasting (IFRB).

In his own words, Fr Emil wrote: “The Southern African Catholic Bishops’ Conference (SACBC) established the Radio Veritas Trust in 1998 when the bishops asked me to investigate setting up a Catholic Radio Station. This was my life’s dream and I immediately started consulting people and putting together initial structures which were presented to the bishops.

In 1998, Radio Veritas applied to the Independent Communications Authority of South Africa (ICASA) for an FM Community Radio License. It marked the beginning of a long and often frustrating road to the Radio Veritas permanently on air”. In 1999 the station was officially launched.

“We thank Fr. Emil for his determination. His voice has fallen silent but the Word of the Lord resounds. Fr. Emil was a visionary and inspiration of Radio Veritas, bringing the Good News to the people of South Africa. A gentle person on the radio”. These were the words of the SACBC Spokesperson Archbishop Slattery.

We shall remember him. May God give him that place he had prepared for him.

Rest in Peace Fr. Emil. Radio Veritas the Good News for a change! Will continue.