Vatican to Young People: Ask for ‘Words of Wisdom’ for Christmas 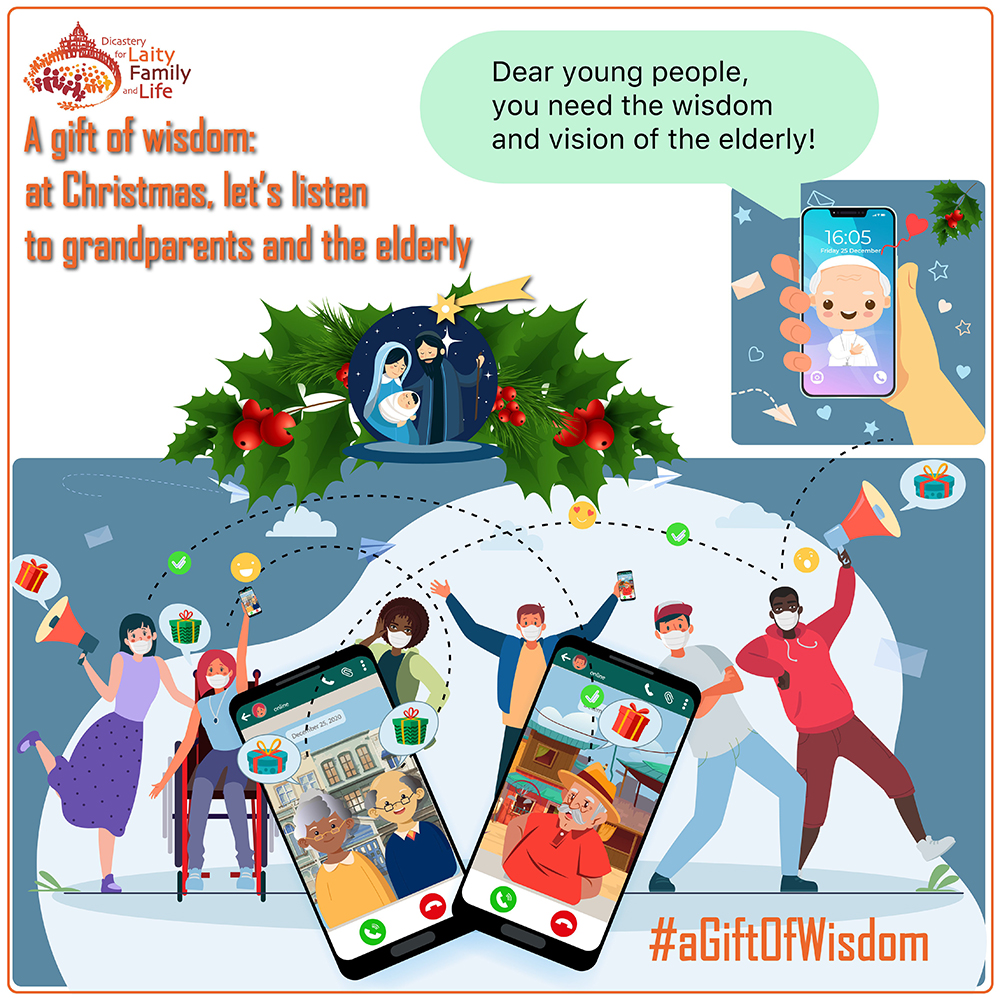 By Carol Glatz – One present young people should ask for this Christmas is words of wisdom from older people they know, a Vatican dicastery said.

“Today, in the difficult circumstances of a Christmas still overshadowed by the pandemic, we are proposing that young people post on social media a memory, a piece of advice or a ‘gift of wisdom’ they have received from one of the elderly people with whom they have formed a bond in recent months,” said the Dicastery for Laity, the Family and Life.

The invitation was part of a new campaign launched Nov. 27 aimed at encouraging young people to reach out to their grandparents and other older people, not only to help alleviate the isolation and loneliness caused by pandemic restrictions, but also to create new and creative bonds.

The unusual circumstances caused by the pandemic means “there is an opportunity for young people to receive a special gift” for Christmas this year, the dicastery said in a news release.

“Because of the pandemic, there are more elderly people who live alone. We can create bonds with each of them – this is a treasure waiting to be discovered!”

The Vatican office asked that people reach out to older people and ask for “the gift of their wisdom.” People can then take the advice, memories and nuggets of wisdom they collect and post them on social media using the hashtag #aGiftOfWisdom.

“Some of the best posts will be shared” on the dicastery’s social media accounts @laityfamilylife, it said.

“Unfortunately, in many cases, because of the health regulations in force, visiting can only take place remotely, via telephone, video calls and messaging. But it is possible to participate in this campaign” by sharing “the wise words of grandparents and the elderly on social media,” it added.

The latest campaign follows a similar effort the dicastery launched in July in which it “collected virtual hugs sent by many young people to both their own grandparents and to ‘adopted grandparents,'” it said. The effort was meant to encourage young people to show kindness and affection to older people who may be feeling lonely.

For other ideas and guidance, the dicastery has posted on its website, laityfamilylife.va, a free e-book, “The Richness of Many Years of Life,” which offers a toolkit in multiple languages “for the development of a true pastoral ministry that reaches out” and involves the elderly as active participants in the church.