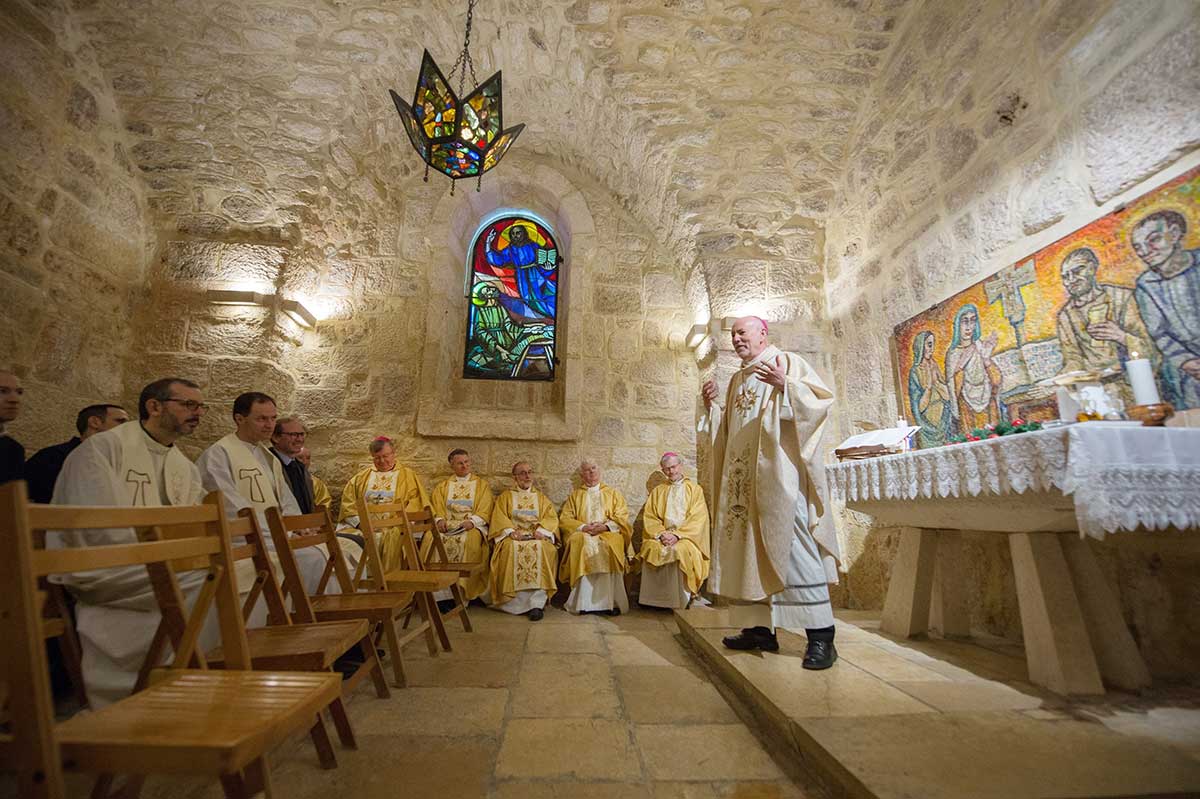 Bishop William Nolan of Galloway, Scotland, delivers the homily during Mass with other members of the Holy Land Coordination in St. Jerome’s Cave in the Church of the Nativity in Bethlehem, West Bank, March 5, 2012. In a final statement after their 2021 virtual visit, the bishops said “there is today less cause for optimism than at any time in recent history.” (CNS photo/courtesy Marcin Mazur via catholicnews.org.uk)

By Judith Sudilovsky –  Bishops who spent six days visiting virtually with Christians in the Holy Land said “it has become painfully clear that there is today less cause for optimism than at any time in recent history.”

The bishops from the US, Europe and South Africa also said the international community should “hold Israel accountable for its moral, legal and humanitarian responsibility” to make COVID-19 vaccines accessible for Palestinians in the West Bank and Gaza, and countries should encourage cooperation by the Palestinian Authority.

They also noted the lack of political progress and the continuing expansion of Israeli settlements in the West Bank along with the impact of Israel’s Nation-State law, which establishes “Jewish settlement as a national value” and the Jewish nature and character of the state without mention of democracy or human rights, as “eroding any prospect of a peaceful two-state solution.”

“This is the first time we have been prevented from meeting physically in the Holy Land,” said the bishops, who have visited each year since 2000. “Yet we remain resolutely committed to supporting our sisters and brothers in the homeland of Christ. Over the past week we have been privileged and moved to hear from Christians across the West Bank, Gaza and Israel about their mission, resilience and witness in these unprecedented circumstances.”

Stressing the importance of Israeli and Palestinian leadership recommitting themselves to direct negotiations, they called on their governments to renew their active participation in a “search for a just peace supporting dialogue between all sides, upholding international law, and reaffirming the plurality of Jerusalem, given its unique significance for Jews, Christians and Muslims.”

Lauding the work of Christian institutions – including schools, clinics, hospitals and charity organisations such as Caritas – the bishops said they were “models of charity, justice and peace.”

“These Christian institutions are vital in bringing together people from many different backgrounds to serve the common good of all,” they said, urging people to strengthen their expression of solidarity with the people of the Holy Land during this “critical time.”

“While many of our own countries continue to face severe hardship amid the pandemic, we have a profound responsibility to support our fellow Christians in the Holy Land,” they said.