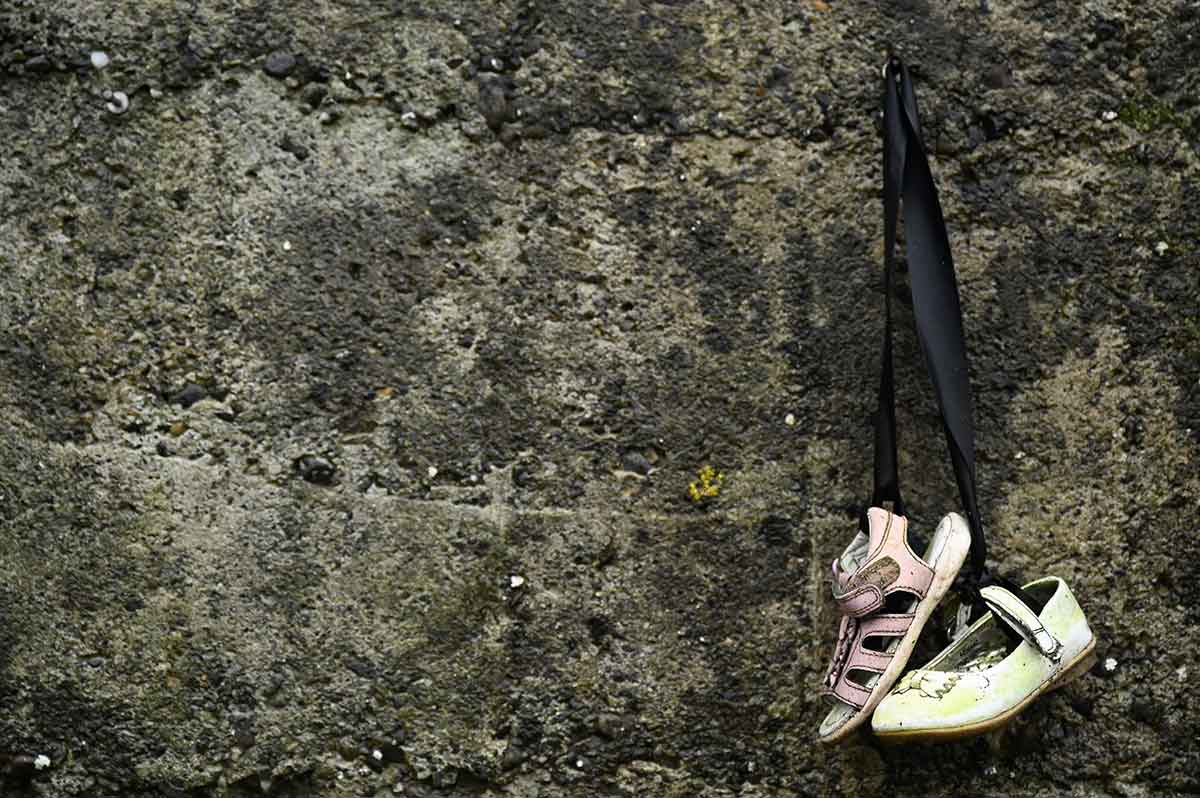 Baby shoes hang on a wall at a cemetery in Tuam, Ireland, where the bodies of nearly 800 infants were uncovered at the site of a former Catholic home for unmarried mothers and their children. The photo was taken Jan. 12, 2021, the day a commission investigating the treatment of women in such homes released its report. (CNS photo/Clodagh Kilcoyne, Reuters)

Taoiseach Micheál Martin has said the publication of the mother-and-baby homes report describes a dark, difficult and shameful chapter of very recent Irish history with real and lasting consequences for many people.

Thousands of babies and children died in 18 of Ireland’s mother and baby homes – church-run institutions where unmarried women were sent to deliver their babies in secret, often against their will – over eight decades.

But survivors say the report glosses over the facts and does not go far enough – It did not include one single explanation for the high rates of mortality.

The commission spent five years investigating the treatment of unmarried mothers in state-funded church-run homes in Ireland said the blame for their “harsh treatment” rests primarily with their families, but that both the church and state condoned this.

The report of the Commission of Investigation into Mother and Baby Homes and Certain Related Matters was published Jan. 12 and reviewed 18 institutions from 1922 to 1998. It found that “Ireland was a cold harsh environment for many, probably the majority, of its residents during the earlier half of the period under remit.” The report said that Ireland was “especially cold and harsh for women.”

The responsibility for the “harsh treatment” of unmarried mothers “rests mainly with the fathers of their children and their own immediate families,” the report said.

The commission, led by Judge Yvonne Murphy, stated that the mistreatment of unmarried mothers “was supported by, contributed to, and condoned by, the institutions of the state and the churches.” At the same time, the commission found that “it must be acknowledged that the institutions under investigation provided a refuge – a harsh refuge in some cases – when the families provided no refuge at all.”

The report said there is no evidence that the Catholic hierarchy played a role in the day-to-day running of mother-and-baby homes.

The inquiry was established after a local historian discovered death certificates for almost 800 infants at a home run by the Bon Secours Sisters in Tuam. However, the historian, Catherine Corless discovered there were no burial records. Public outcry resulted in a Commission of Investigation being established.

On the issue of what became known as the “Tuam babies,” the report said in that particular home “no register of burials was kept, and it is likely that most of the children who died in Tuam are buried inappropriately in the grounds of the institution.”

There were about 56,000 unmarried mothers and about 57,000 children in the homes investigated by the commission.

While the report said that the homes were not a peculiarly Irish phenomenon, it said the proportion of Irish unmarried mothers who were admitted to mother and baby homes in the 20th century was probably the highest in the world.

The women who were admitted to mother and baby homes ranged in age from 12 years old to women in their 40s. However, 80% were between 18 and 29 years, and this was consistent across the larger mother and baby homes. More than 5,600 women, 11.4% of the total for whom information about their age is available, were under age 18.

The report also revealed that some pregnancies were the result of rape; some women had mental health problems; some had an intellectual disability. However, the majority were indistinguishable from most Irish women of their time, it said.

The commission said “the only difference between the women in mother and baby homes and their sisters, classmates and work companions was that they became pregnant while unmarried.” It continued: “Their lives were blighted by pregnancy outside marriage and the responses of the father of their child, their immediate families and the wider community.”

On the issue of infant mortality, the commission said, “No publicity was given to the fact that in some years during the 1930s and 1940s, over 40% of ‘illegitimate’ children were dying before their first birthday in mother and baby homes.”

Murphy found there were a small number of complaints of physical abuse. Many women suffered emotional abuse and often were subjected to denigration and derogatory remarks. Little kindness was shown to them, particularly during childbirth, the report said. 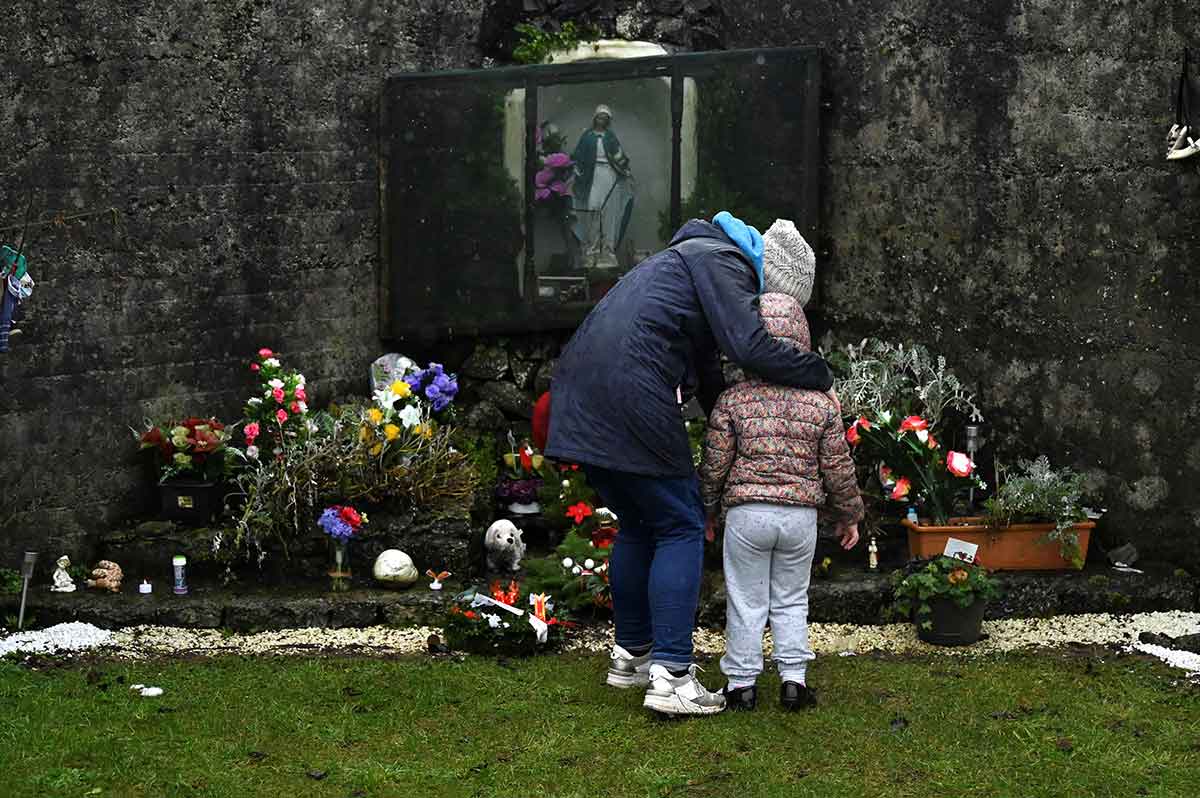 Between 1922 and 1998, 1,638 children who lived in the mother and baby homes were placed for foreign adoption. The vast majority, 1,427, were placed for adoption to the United States.

There was no regulation of foreign adoptions. However, allegations of large sums of money being given to religious orders and agencies in Ireland that arranged foreign adoptions are impossible to prove or disprove, the commission found.

The commission also found children in mother and baby homes were subjected to vaccine trials without the consent of their parents or guardians. It identified seven such trials between 1934 and 1973 and found they were not compliant with regulatory and ethical standards of the time due to lack of consent and the failure to have necessary licenses in place. However, it found no evidence of injury to the children involved as a result of the vaccines.

The commission recommended that there be a right for adopted people to access their birth information, including their birth certificates and other records, even though commissioners were “acutely conscious of the concerns expressed by some birth mothers about this.”

It said redress was a matter for the government and recognised that it might not be possible to provide financial redress for all the wrongs in the past. The report stated it was arguable that unmarried mothers not in the homes and who reared their children without government assistance had as good a case for redress as those in the homes paid for by the government.

A redress plan, if it is being considered, could be modelled on the two comparable plans: the Residential Institutions Redress Scheme, which would be for the children, and the Magdalene Laundries scheme, which could be used for mothers.