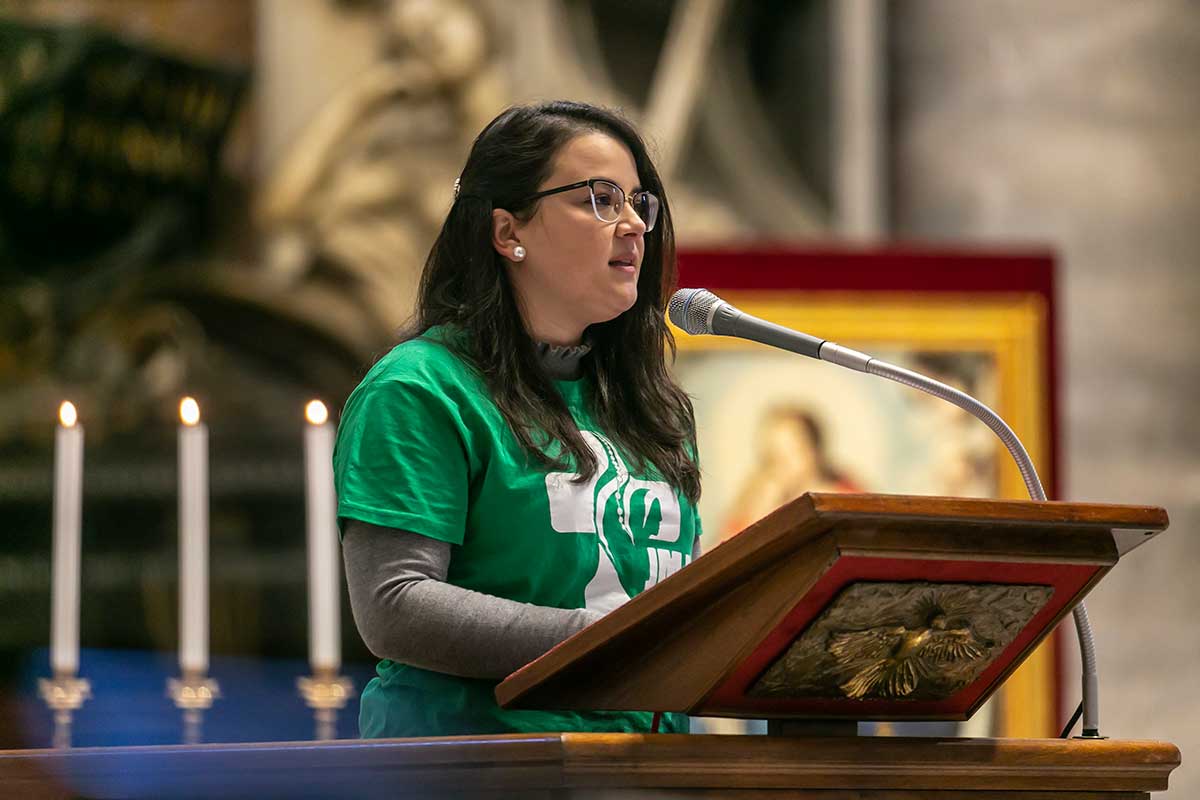 A young woman reads during Pope Francis’ celebration of Mass on the feast of Christ the King in St. Peter’s Basilica at the Vatican Nov. 22, 2020. On Jan. 11, 2021, Pope Francis ordered a change to the Code of Canon Law so that women may be formally instituted as lectors and acolytes. (CNS photo/Stefano Dal Pozzolo, pool)

By Cindy Wooden – More than 40 years ago, then-Archbishop William Borders of Baltimore issued a pastoral letter signalling his intention to ask that the “official ministries” of lector and acolyte be opened to women.

Of course, in parishes and dioceses around the world, women already were reading the Scriptures at Mass, and some women and girls were altar servers and extraordinary ministers of the Eucharist.

But when the Code of Canon Law was promulgated in 1983, six years after Archbishop Borders’ request, it still specified that permanent installation in those ministries was restricted to men.

Pope Francis issued a document, “Spiritus Domini” (The Spirit of the Lord) Jan. 11, changing canon law to allow both women and men to be installed formally or “admitted on a stable basis through the prescribed liturgical rite to the ministries of lector and acolyte.”

The pope cited the request made by members of the 2019 Synod of Bishops for the Amazon, asking that the church “promote and confer ministries for men and women in an equitable manner. The fabric of the local church, in the Amazon as elsewhere, is guaranteed by small missionary church communities that cultivate faith, listen to the Word and celebrate together close to the people’s life. It is the church of baptized men and women that we must consolidate by promoting ministries and, above all, an awareness of baptismal dignity.”

Over the years, many bishops requested such a change, particularly during meetings of the Synod of Bishops at the Vatican.

The requests, like the prayers written for the installation rite for each ministry, make it clear that reading the Scriptures or serving at Mass is only the most public part of the two ministries.

For example, the Vatican-approved text of the bishop’s instruction to those about to be installed as lectors describes the ministry as a “special office within the Christian community.”

The bishop tells them, “You will be given a responsibility in the service of the faith, which is rooted in the word of God. You will proclaim that word in the liturgical assembly, instruct children and adults in the faith and prepare them to receive the sacraments worthily. You will bring the message of salvation to those who have not yet received it.”

When instituting acolytes, the text has the bishop tell them, “As people chosen for the ministry of acolyte, you will have a special role in the church’s ministry. The summit and source of the church’s life is the Eucharist, which builds up the Christian community and makes it grow.”

The instruction notes that they serve priests and deacons at the altar, but also that they are instituted to distribute Communion at Mass and to the sick.

“In performing your ministry bear in mind that, as you share the one bread with your brothers and sisters, so you form one body with them. Show a sincere love for Christ’s Mystical Body, God’s holy people, and especially for the weak and the sick. Be obedient to the commandment which the Lord gave to his apostles at the Last Supper: ‘Love one another as I also have loved you.'”

In most dioceses around the world, seminarians are the only men formally installed as lectors and acolytes.

When Pope Francis changed canon law to open the ministries to women, he asked the Congregation for Divine Worship and the Sacraments to implement the reform by amending the installation rites and connected norms.

Archbishop Arthur Roche, secretary of the congregation, told Catholic News Service Jan. 21 he did not know how long it would take.

Once the amendments are completed, it is unclear how many dioceses would move to a widespread, formal installation of lectors and acolytes or how many women would want to be installed.

Pope Francis, in a letter accompanying his change to canon law, highlighted both the symbolic importance of the move — recognising the equal dignity of baptised men and women — but also how its concrete importance could vary from place to place.

“The choice to confer also to women these offices, which entail stability, public recognition and a mandate on the part of the bishop, renders more effective in the church everyone’s participation in the work of evangelisation,” the pope said.

Welcoming the pope’s move, the women’s International Union of Superiors General said, “In many places women, and especially consecrated women, fulfil different pastoral ministries” in accordance with the guidelines of local bishops. The pope’s document, “with its universal character, is a confirmation of the church’s path in acknowledging the service ‘of so many women who have cared and continue to care for the service of the word and the altar,'” the statement said.

Mercy Sister Sharon Euart, who became a canon lawyer with Archbishop Borders’ encouragement, said she thought some people would see the change “as a further recognition of the role of women in the liturgical life of the church; others may see it as unnecessary or even undesirable.”

However, she said, “I don’t think the change is meant for every girl or woman who is currently a lector or altar server in her parish. It is likely that there will be some discernment of call, gifts and suitability for the ministry.”

Phyllis Zagano, an expert on women in the church, particularly on the history of women deacons, told CNS: “This is the first time the church has legally affirmed that women can be near the sacred, an important commentary that underscores the church teaching that all are made in the image and likeness of God. Until now, there has only been a finding in the early 1990s that women were included in ‘all laypersons’ in the canon that allowed a bishop to temporarily allow any layperson to fulfil the ministries of lector and acolyte.

“The ‘message,’ if you will, is one of the common baptism of men and women,” she said, but when read alongside Pope Francis’ frequent comments “about not ‘clericalising’ women, it can also be seen as an affront.”

Still, Zagano said, “it is important to regularise canon law so that it recognises the equal humanity of men and women, especially for areas of the world where women are still considered chattel.”