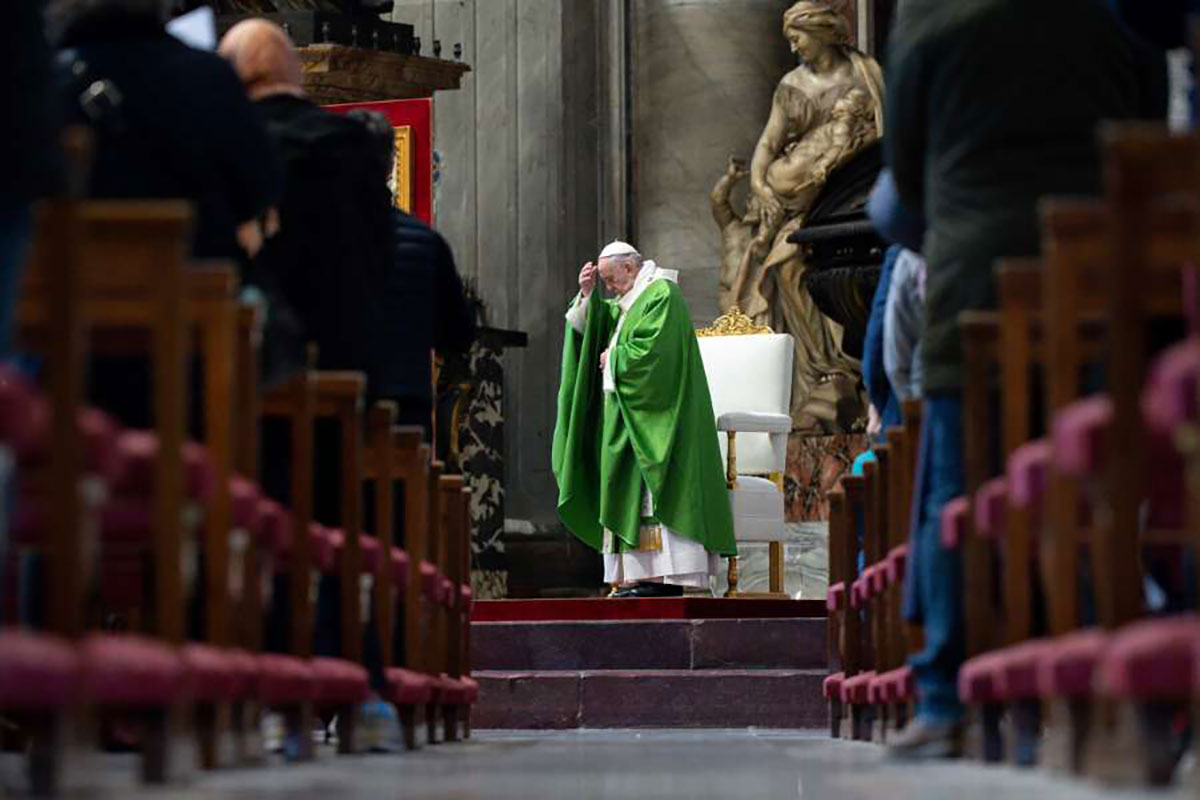 Pope Francis has been forced to cancel three public appearances scheduled for Sunday and Monday due to a recurrence of the nerve pain that struck him at the end of 2020.

The Holy See press office announced that because of sciatica the 84-year-old pope would be unable to celebrate Mass marking the Sunday of the Word of God in St. Peter’s Basilica.

The Mass today was celebrated instead by Archbishop Rino Fisichella, president of the Pontifical Council for Promoting the New Evangelisation.

But Pope Francis still led the Angelus prayer at noon on Sunday in the library of the Apostolic Palace, where the event has taken place since a resurgence of the coronavirus pandemic in Italy.

The pope’s annual “state of the world” address to the diplomatic corps accredited to the Holy See, scheduled for Jan. 25, will now take place at a later date.

Pope Francis will no longer preside at vespers for the conclusion of the Week of Prayer for Christian Unity, also scheduled to take place on Monday. Cardinal Kurt Koch, president of the Pontifical Council for Promoting Christian Unity, will now lead the event at the Basilica of St. Paul Outside the Walls, one of the four papal basilicas of Rome.

The pope had a bout of sciatic pain in the final days of 2020 that meant he was unable to preside at the Vatican’s liturgies on New Year’s Eve and New Year’s Day.

He had been scheduled to lead vespers on Dec. 31 and offer Mass on Jan. 1 for the Solemnity of Mary, Mother of God, in St. Peter’s Basilica.

The pope is due to resume his foreign travels in March when he is expected to visit Iraq. But a question mark hangs over the visit because of concerns about large gatherings amid the pandemic and a recent upsurge in violence in the Middle Eastern country.

Sciatica is caused by pressure or rubbing on the sciatic nerve, which starts in the lower back and runs down the back of the thigh and leg to the foot. Common symptoms include shooting pains in the back of the legs.

Pope Francis has suffered from the condition for a number of years. He spoke about it during an in-flight press conference returning from a trip to Brazil in July 2013.

He said that “the worst thing” that had happened in the first four months of his pontificate “was an attack of sciatica — really! — that I had the first month, because I was sitting in an armchair to do interviews and it hurt.”