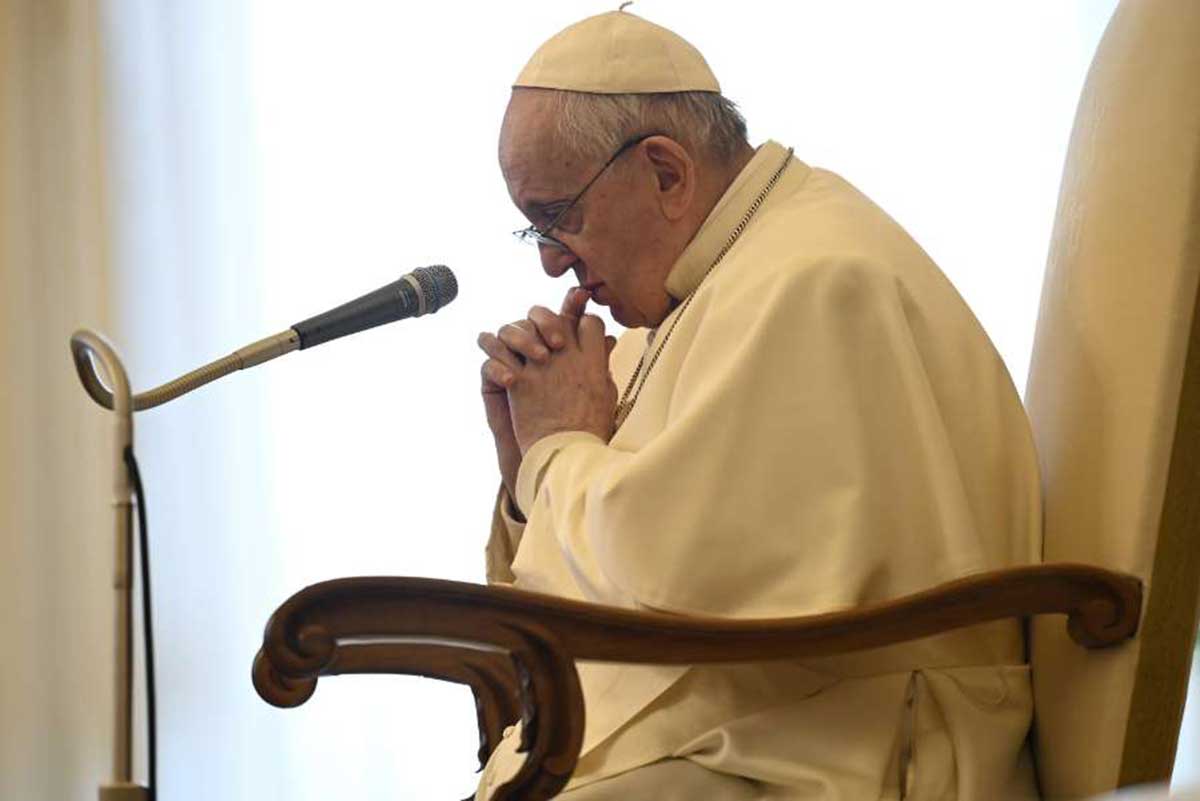 Pope Francis said that commemorating the Holocaust means to be aware that “these things can happen again.”

Speaking at the end of his general audience, the pope noted that Jan. 27, the anniversary of the liberation of Auschwitz, is International Holocaust Remembrance Day.

He said: “We commemorate the victims of the Holocaust and all those persecuted and deported by the Nazi regime. To remember is an expression of humanity. Remembrance is a sign of civilisation. To remember is a condition for a better future of peace and fraternity.”

“Remembrance also means being careful because these things can happen again, starting with ideological proposals that are intended to save people and end up destroying people and humanity. Be aware of how this road of death, extermination, and brutality began.”

In his general audience address, Pope Francis continued his cycle of catechesis on prayer, which he began in May and resumed in October following nine addresses on healing the world after the pandemic.

He dedicated Wednesday’s audience – held in the library of the Apostolic Palace due to coronavirus restrictions – to the prayerful reading of the Bible.

“The words of Sacred Scripture were not written to remain imprisoned on papyrus, parchment or paper, but to be received by a person who prays, making them blossom in his or her heart,” he said.

Although a particular Bible verse was set down centuries ago, we should remember that it was also written for us.

“This experience happens to all believers: a passage from the Scripture, heard many times already, unexpectedly speaks to me one day, and enlightens a situation that I am living,” he said.

“But it is necessary that I, that day, be present for that appointment with that Word, be there, listening to the Word.”

The pope said that God sows seeds in us every day, but whether they take root depends on how prayerful and open our hearts are as we approach the Scriptures.

“Through prayer a new incarnation of the Word takes place. And we are the ‘tabernacles’ where the words of God want to be welcomed and preserved, so that they may visit the world,” he said.

“This is why we must approach the Bible without ulterior motives, without exploiting it. The believer does not turn to the Holy Scriptures to support his or her own philosophical and moral view, but because he or she hopes for an encounter; the believer knows that they were written in the Holy Spirit, and that therefore in that same Spirit they must be welcomed and understood, so that the encounter can occur.”

The pope said that it annoyed him when he heard Christians reciting Bible verses “like parrots.” He stressed that it was important not only to quote verses but also to have encountered Jesus in them.

He said that as we read the Scriptures, we should allow them to “read us.”

“And it is a grace to be able to recognise oneself in this passage or that character, in this or that situation,” he commented.

“The Bible was not written for a generic humanity, but for us, men and women in flesh and blood, men and women who have first and last names, like me, like you. And the Word of God, infused with the Holy Spirit, when it is received with an open heart, does not leave things as they were before. And that is the grace and the power of the Word of God.”

The pope then reflected on the method of praying with the Bible known as “lectio divina,” which originated in monasteries but is now used by lay Catholics the world over.

Explaining the method, he said: “It is first of all a matter of reading the biblical passage attentively, I would say with ‘obedience’ to the text, to understand what it means in and of itself.”

“One then enters into dialogue with Scripture, so that those words become a cause for meditation and prayer: while remaining faithful to the text, I begin to ask myself what it ‘says to me.’”

He described this as a “delicate step” in the process because there is a danger of falling into a purely subjective interpretation of Bible verses. He said that Christians could avoid this trap by relying on “the living way of Tradition” to interpret passages.

“The last step of lectio divina is contemplation. Words and thoughts give way here to love, as between lovers who sometimes look at each other in silence. The biblical text remains, but like a mirror, like an icon to be contemplated. And in this way, there is dialogue,” he said.

The pope underlined the benefits of prayerfully reading the Bible

“Through prayer, the Word of God comes to abide in us and we abide in it. The Word inspires good intentions and sustains action; it gives us strength and serenity, and even when it challenges us, it gives us peace,” he said.

“On ‘weird’ and confusing days, it guarantees to the heart a core of confidence and of love that protects it from the attacks of the evil one.”

In conclusion, the pope said that Christian life was at once “a work of obedience and creativity.”

“The Holy Scriptures are an inexhaustible treasure. May the Lord grant to all of us to draw ever more from them, through prayer,” he said.

In his greeting to Polish speakers, the pope recalled that Jan. 27 is the feast day of St Angela Merici, who founded the Company of St Ursula in 1535.

He said: “From her spirituality, numerous Ursuline congregations have blossomed, also present in Poland. Inspired by the Word of God, St. Angela wished that the sisters, unreservedly dedicated to God and the poor, would courageously take on the work of educating children and young people. She counselled: ‘Hold fast to the ancient path (…) and make new life!’”

Greeting Italian-speakers, the pope observed that Jan. 28 is the liturgical memorial of St Thomas Aquinas, patron of Catholic schools.

“May his example encourage everyone, especially students, to see Jesus as the only teacher of life; and may his teaching encourage you to entrust yourselves to the wisdom of the heart in order to fulfil your mission,” he said.