Pope: Money at Root of Opposition to Annulment Reform 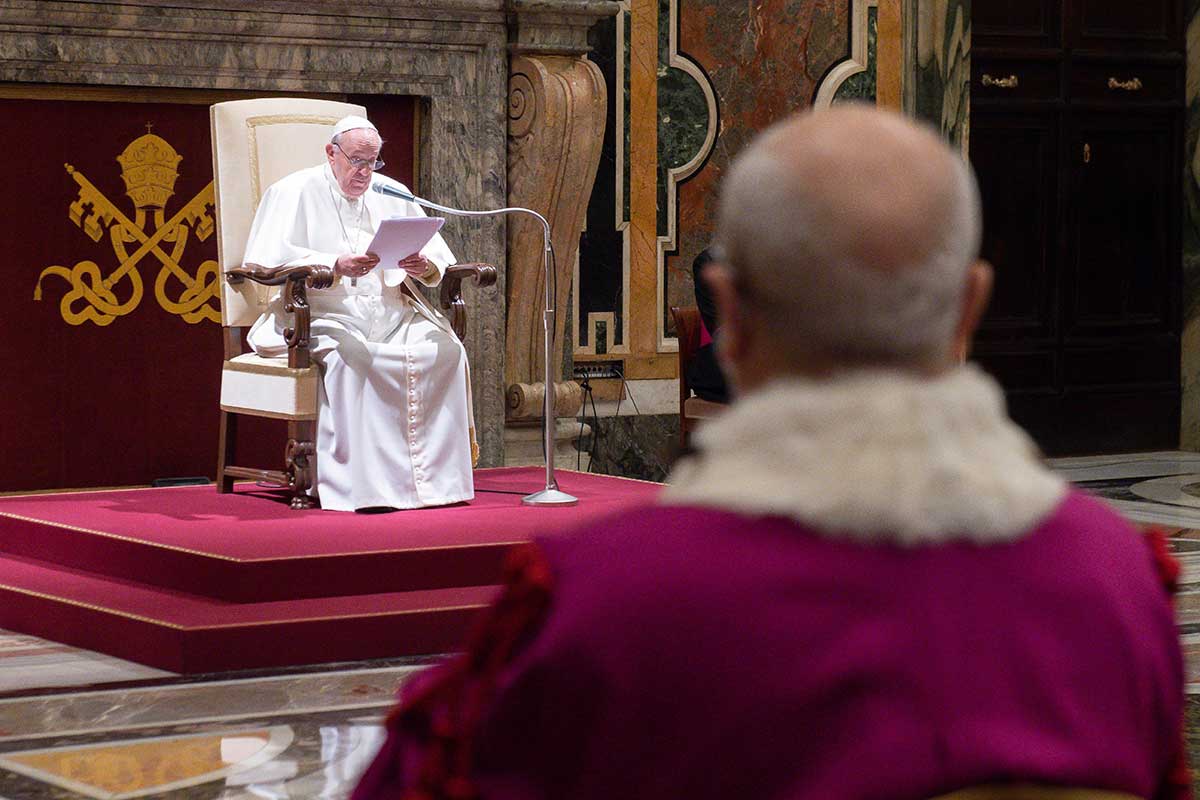 Pope Francis leads an audience with members of the Roman Rota, a Vatican tribunal handling mostly marriage cases, at the Vatican Jan. 29, 2021. The audience marked the start of the court’s judicial year. The pope said the potential loss of money and authority were at the heart of the opposition against reforming the church’s annulment process. (CNS photo/Vatican Media

By Junno Arocho Esteves – The potential loss of money and authority are often at the heart of the opposition against reforming the Catholic Church’s annulment process, Pope Francis said.

Departing from his prepared remarks during a Jan. 29 meeting with members of the Roman Rota, a tribunal handling mostly marriage cases, the pope said that after implementing reforms that streamlined annulments in 2015, he “received many letters” and encountered “so much resistance.”

“Almost all of them were lawyers who were losing clients. And therein lies the problem of money,” he said. “In Spain, there is a saying, ‘Por la plata baila el mono’ – ‘Monkeys will dance for money.’ It is a saying that is clear.” ( Some countries, such as Italy, allow the annulment process to substitute for the civil act of divorce).

The pope also said he was saddened to see “resistance in some dioceses by some judicial vicars who with this reform would lose, I don’t know, a certain form of power because it became clear that he is not the judge, but the bishop is.”

In September 2015, the pope issued two documents – “Mitis Iudex Dominus Iesus” (“The Lord Jesus, the Gentle Judge”) for the Latin-rite church and “Mitis et misericors Iesus,” (“The Meek and Merciful Jesus”) for the Eastern Catholic churches – that reformed sections of canon law dealing with requests for the declaration of the nullity of a marriage.

The documents also emphasised that the annulment process be free of charge or as close to free as possible.

The reforms – which do away with an automatic appeal of all decisions, charge diocesan bishops with responsibility for handling some cases and institute an abbreviated process for cases where the evidence is especially clear and uncontested – were meant to streamline the process and help couples in need of healing.

Continuing to speak off-the-cuff, the pope recalled receiving a call from a bishop shortly after the promulgation of the reformed annulment process.

“He told me, ‘I have this problem. There is a woman who wants to marry in the church; she was already married several years ago in the church, but she was forced to marry because she was pregnant. I have done everything: I asked a priest to serve as judicial vicar, another that served as defender of the bond. And the witnesses, the parents said yes, she was forced, and that marriage was null. Tell me, Holy Father, what should I do?'” the pope recalled.

In his prepared remarks, the pope told the judges that declaring a marriage is null must not be a cold decision that overlooks the well-being of family members, especially children.

“The declaration of matrimonial nullity is often thought of as the cold act of a merely juridical decision,” he said. “But it is not and cannot be so. The judgment of the ecclesiastical judge cannot disregard the memories — made up of light and shadow — that have marked the life, not only of the two spouses, but also the children.”

Pope Francis reminded the members of the Roman Rota that their “ecclesial ministry” is “a difficult but not impossible pastoral work” that involves being concerned for children who are “the innocent victims of so many situations of breakup, divorce and new civil unions.”

He also emphasised the important role of judicial vicars, priests and those involved in the pastoral care of families to care for and accompany families, especially spouses and children “who suffer the decisions, albeit just and legitimate, of a matrimonial annulment.”

“The creativity of charity will foster an evangelical sensitivity in the face of family tragedies whose protagonists cannot be forgotten,” the pope said.