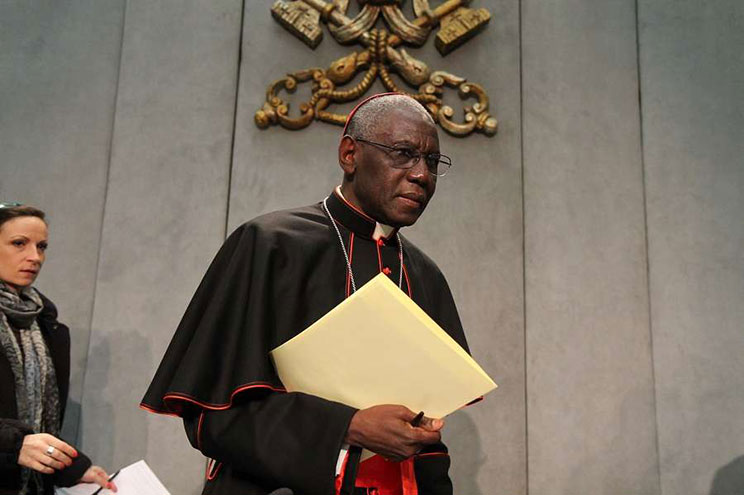 Pope Francis accepted the resignation of Cardinal Robert Sarah as prefect of the Congregation for Divine Worship and the Discipline of the Sacraments.

Sarah, who turned 75 in June 2020, was the most senior African prelate at the Vatican, appointed head of the liturgy department by Pope Francis in November 2014.

He had previously served as the president of the Pontifical Council Cor Unum and as secretary of the Congregation for the Evangelisation of Peoples.

Sarah said in a Tweet on February 20 that Pope Francis had accepted his resignation after his 75th birthday.

“I am in God’s hands. The only rock is Christ. We will meet again very soon in Rome and elsewhere,” he wrote on Twitter.

Today, the Pope accepted the resignation of my office as Prefect of the Congregation for Divine Worship after my seventy-fifth birthday. I am in God’s hands. The only rock is Christ. We will meet again very soon in Rome and elsewhere.

During his tenure at the Congregation for Divine Worship and the Discipline of the Sacraments, Cardinal Sarah built a reputation for outspoken commentary on the Church and the world.

In 2016, he encouraged priests to celebrate Mass facing east, prompting a Vatican spokesman to say that his words had been “misinterpreted.”

During the first Synod on the Family in 2014, Cardinal Sarah opposed what he said were efforts by the media “to push the Church [to change] her doctrine” on homosexual unions.

At the 2015 family synod he said threats to the institution of marriage and the family claiming “what Nazi fascism and communism were in the 20th century, Western homosexual and abortion ideologies and Islamic fanaticism are today.”

Sarah was also at the centre of a controversy over the presentation of a book, “From the Depths of Our Hearts,” as a co-authored work by himself and Pope emeritus Benedict XVI in January 2020.

The book, subtitled “Priesthood, Celibacy, and the Crisis of the Catholic Church,” elicited conflicting statements on the extent of the pope emeritus’s involvement in the project.

Sarah defended himself in statements on Twitter, saying January 17, 2020 he met with Benedict and “there is no misunderstanding between us.”

Cardinal Sarah was considered papabile, or a candidate for the papacy, in the 2013 conclave which elected Pope Francis.

Born in 1945 in French Guinea, Sarah was ordained a priest in 1969 for the Diocese of Conakry, after periods of study in Ivory Coast, Guinea, France, Senegal, Rome, and Jerusalem.

Sarah was appointed archbishop of Conakry in 1979, at the age of 34, a position he held until 2001, including during the dictatorship of Ahmed Sékou Touré.

Sarah has been praised for his resistance to Sékou Touré’s Marxist dictatorship, and for maintaining the unity of the Church as an independent institution as Catholic clergy and laity were persecuted.

In 2001, Pope John Paul II brought Sarah to the Vatican when he named him secretary of the Congregation for the Evangelisation of Peoples.

He was appointed president of the Pontifical Council Cor Unum in October 2010, and one month later he was elevated to cardinal.

Sarah was named prefect of the Divine Worship congregation in 2014.

During the coronavirus pandemic in April 2020, Sarah said in an interview with the French magazine Valeurs actuelles that the sick and dying cannot be denied the sacramental assistance of a priest.

“But no one,” he continued, “has the right to deprive a sick or dying person of the spiritual assistance of a priest. It is an absolute and inalienable right.”

In May last year, Sarah insisted he was wrongly included as a signatory on a controversial open letter arguing that forces could exploit the pandemic in order to usher in a one-world government.