Why Should Christians Care About Iraq? 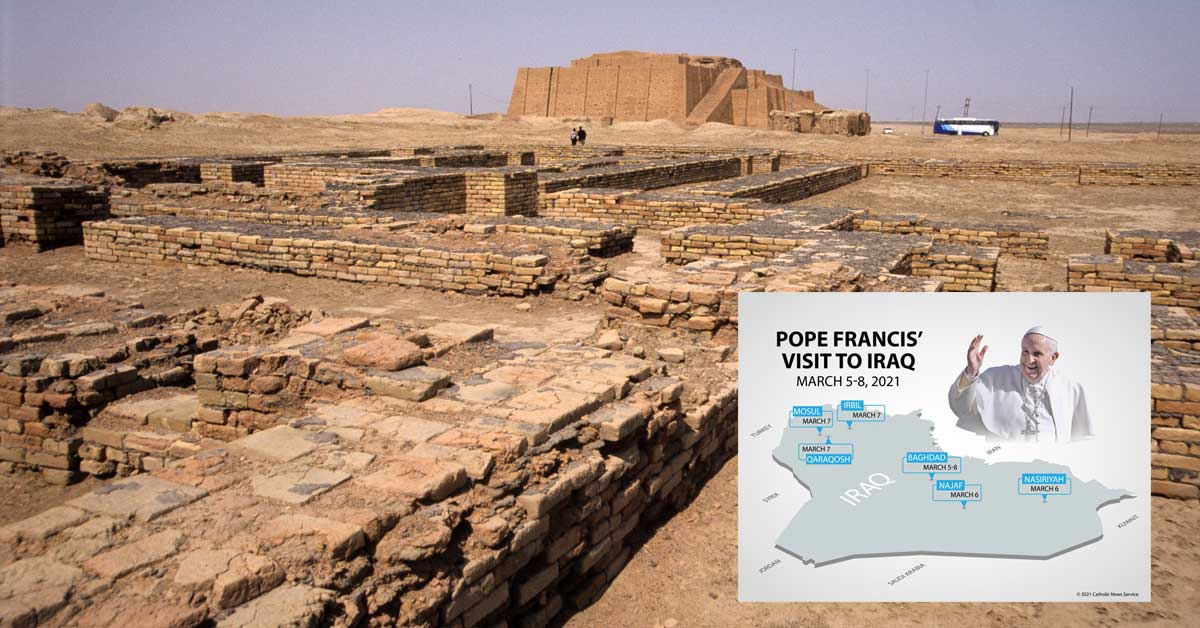 The ruins of Ur, Iraq, with the reconstructed Ziggurate in the background, are pictured in 1998. During his March 5-8 trip to Iraq, Pope Francis will visit Ur, the birthplace of Abraham, recognised as the patriarch of faith in one God by Jews, Christians and Muslims. (CNS photo/Norbert Schiller)

By Dale Gavlak – Pope Francis hopes to embark on the first-ever papal visit to the biblical land of Iraq in early March in a spiritual pilgrimage of sorts to the place known in Arabic as the “land of the two rivers” — the mighty Tigris and Euphrates — and once renowned as Mesopotamia, the “cradle of civilization.”

The Garden of Eden is believed possibly to have been in ancient Iraq, but certainly the famed Hanging Gardens of Babylon and the Tower of Babel were located there. Jews exiled to ancient Iraq in Old Testament times, such as the prophet Daniel, experienced God’s miraculous grace; Daniel was rescued from the lion’s den and his friends from the fiery furnace.

“The pontiff said he looks forward to visiting our country, which is also where Abraham began his journey,” Cardinal Louis Sako of Baghdad said of the March 5-8 trip.

The historically rich country is full of religious sites important to understanding the antecedents of the Christian faith, making the visit significant for Pope Francis. Here’s a snapshot of some of these places.

Old Testament patriarch Abraham is recognised as the father of faith in one God by Jews, Christians, and Muslims alike and was born in the southern town of Ur. The place, which dates back to 6000 B.C., lies on a former course of the Euphrates and is one of Iraq’s oldest sites.

The pope will see a dry, flat, and ochre-coloured plain renowned for its well-preserved stepped platform or ziggurat, which dates back to the third millennium B.C. Also, some of the earliest known writing, cuneiform, has been uncovered at Ur.

Around 2000 B.C., Ur was a bustling urban centre, drawing traders from both the Mediterranean and the Indian subcontinent, until its conquest by Alexander the Great a few centuries before Christ. Pope Francis will participate in an interreligious meeting there.

Pope Francis will travel to Nafaq, also in the South, for a key encounter with one of Shiite Islam’s most authoritative figures, Ayatollah Ali al-Sistani, as part of his efforts to embrace all of the Islamic world.

Lying 161km south of the capital, Baghdad, Najaf is a centre of Shiite Islam’s spiritual and political power as well as a pilgrimage site for Shiite adherents. Its spectacular gold-domed Imam Ali Mosque is considered the third-holiest site for the Shiite Muslims, after Mecca and Medina in Saudi Arabia.

Flying into Baghdad from Rome, Pope Francis will be received in an official welcome ceremony at the presidential palace. At the capital’s Syriac Catholic Cathedral of Our Lady of Deliverance, he will meet bishops, priests, men and women religious, seminarians and catechists. The cathedral was the site of a 2010 massacre that killed 58 people and was claimed by Iraq’s al-Qaida group, which splintered into the so-called Islamic State.

Mass is scheduled at the Catholic Chaldean St Joseph Cathedral, also in Baghdad, a city with a rich, storied history where some 8 million inhabitants now live.

Heading north, Pope Francis will meet the Christian communities of Ninevah Plain, an area overrun by the Islamic State group in 2014 until its liberation three years later. The Old Testament prophet Jonah, who asked people to repent and return to God, lived in Ninevah.

It’s the historic Christian heartland of Iraq, where Christians have lived since Jesus’ earthly ministry, when St Thomas brought the Gospel message around A.D. 35, aided by St Jude. The pair were thought to base themselves in the northern city of Irbil in modern-day Kurdistan, where they preached to the local people.

And it is in that city where Pope Francis will be welcomed by religious and civil leaders. Irbil and the nearby Christian enclave of Ankawa have hosted tens of thousands of Christians and other religious minorities forced to escape Islamic State atrocities.

Chaldean Catholic Archbishop Bashar Warda of Irbil said “international support for livelihood programs” is needed “to help families remain in Iraq.” Some of those groups include Aid to the Church in Need, the Knights of Columbus and Catholic Near East Welfare Association.

One such programme providing livelihood training is the Christian Aid Program Northern Iraq run by Iraqi Father Emanuel Youkhana, who a priest, or archimandrite, of the Assyrian Church of the East.

CAPNI has assisted some “8,500 displaced Christian families to return to their Ninevah Plain towns, helping first to rebuild homes, infrastructure and businesses. Now it is providing English language and vocational training for practical jobs needed in the marketplace,” Father Youkhana told Catholic News Service by phone.

He said that while Pope Francis “may not be able to visit the rebuilding projects due to time, he will certainly be informed.”

“When he is visiting the churches in Mosul and Qaraqosh, of course, he will be updated on rebuilding efforts,” Father Youkhana said, “because he will ask about that and the destruction that happened there.”

An order of nuns now runs a nursery school in Qaraqosh for 130 children, according to the Italian bishops’ conference. The rebuilding of Mosul’s famed Conventual Church of Our Lady of the Hour, along with the Al-Tahera Syriac Catholic Church, is underway.

Rebuilding efforts, including that of Mosul’s iconic Al-Nouri Mosque, is to see Muslims, Christians and other communities “work together, to do something positive together,” French Dominican Father Olivier Poquillon told CNS from Irbil. Then, he said, Christians and other religious minorities must see again that Mosul is “their home and that they are in their own land.”

“We know it will be a challenge for everybody to rebuild trust among people, families and communities. But this is our faith. We believe in a God of mercy, and we believe we have this humanity as a common responsibility,” Father Poquillon said.

Woe To Those Who Gossip

Pope Francis: The greatest joy for every believer is to respond to Gods call