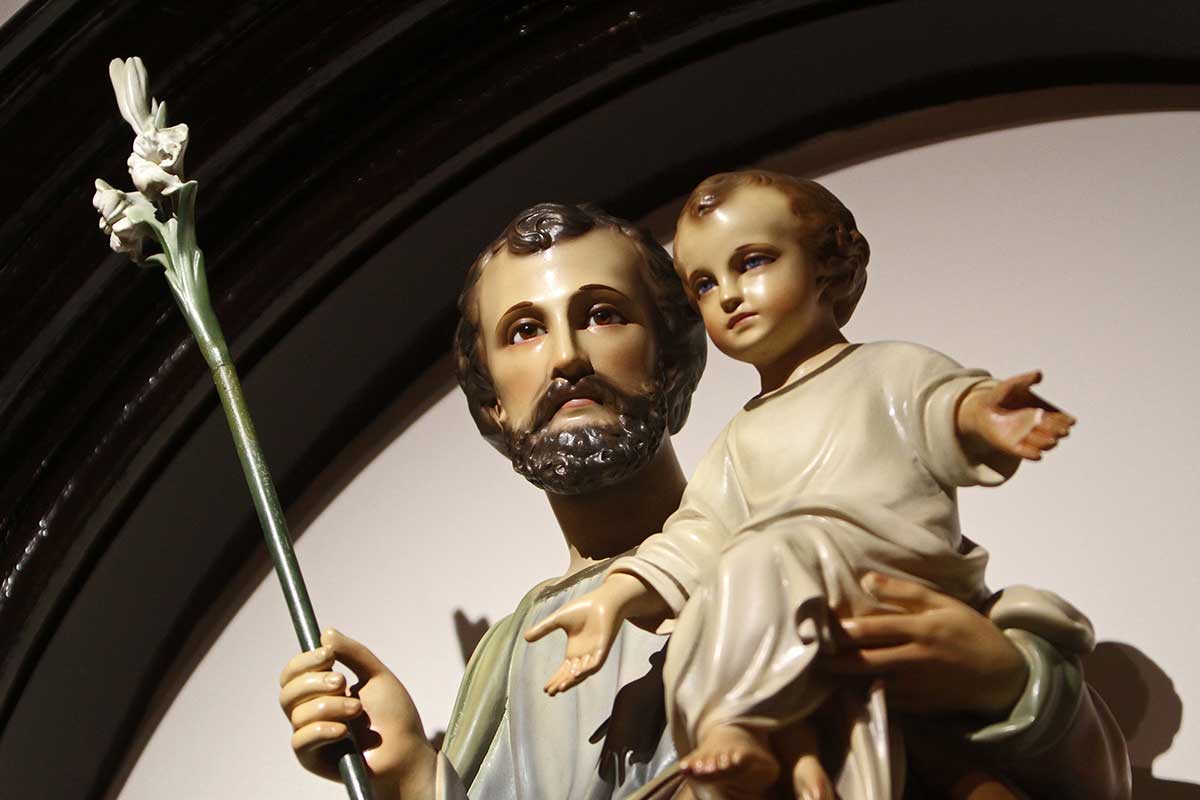 A statue of St. Joseph and the Christ Child is seen at Sacred Heart Church in Island Park, N.Y. (CNS photo/Gregory A. Shemitz)

By Maria Wiering – The folklore is well known: Need to sell a house? Bury a statue of St Joseph in the yard. Maybe wrapped in a cloth. But it must be upside down, near the “For Sale” sign, facing the house. Or facing away from the house, near the road. Or near flowers because he likes that.

On what exactly is to be done, the practice’s “authorities” are conflicting. So is its provenance.

Some say it goes back to St Andre Bessette, a Holy Cross brother in Montreal who at the turn of the 20th century “planted” St Joseph medals in a property his monastery wanted to buy. Others say it began somehow in the 1970s.

A few realtors provide instructions on their website about how to bury the statue, with testimonials from people who say it worked for them.

A website, st-josephstatue.com, is dedicated to the practice, with its mission “to help all believers to sell their houses.” Amazon.com sells several statues for the purpose, including, for $6.72, a “St Joseph Statue Home Seller Kit” made in the U.S. by veterans. Another seller offers 3-inch, beige, plastic St Joseph statues in bulk.

St Joseph has long been understood as a patron of the home, but when it comes to burying his statuewhen selling a house, don’t, said Father Donald Calloway, author of “Consecration to St. Joseph: The Wonders of Our Spiritual Father.” He said the practice “concerns” him.

“Statues, unlike medals, are not made to be buried,” said the priest, who is a member of the Congregation of Marian Fathers of the Immaculate Conception of the Most Blessed Virgin Mary and lives in Steubenville, Ohio. “Statues represent a person, and are meant to be venerated above ground, not buried in the ground.”

He also cautioned against burying a statue of St Joseph upside down.

“People sometimes do this bizarre practice as a form of spiritual bribery, promising to turn the statue of St Joseph right side up only if their home is sold,” Father Calloway told The Catholic Spirit, newspaper of the Archdiocese of St. Paul and Minneapolis. “Such a practice is akin to treating a statue of St. Joseph as a talisman or a good luck charm. St Joseph is your spiritual father, not a trinket.”

Father Tom Margevicius, director of worship for the Archdiocese of St. Paul and Minneapolis, agreed. He said the practice smacks of superstition, not faith.

“What makes me think it would happen faster if I do a ‘St Joseph thing,’ than it would have otherwise if I just talk to God about it?” Father Margevicius asked. “So, do I not trust in God’s care for me and doing what he knows is best for me? So, instead of surrendering myself to the providential care of the Lord, I try to manipulate factors that are ordinarily beyond my control.”

Because something involving a saint may seem like a “Catholic” practice or even a sign of devotion to St. Joseph, some Catholics have likely buried a statue in ignorance, without giving it much reflection, he explained.

For Catholics who really believe the statue would influence the course of events, Father Margevicius advises a soul search, and perhaps a conversation with a spiritual director or other faith mentor about what stands in their way of trusting God’s providence.

And when selling – or buying – a house, rather than turning to a superstition, even meant in good fun, Catholics should make their petition known to God, Father Margevicius said. They also may consider earnest prayers for St. Joseph’s intercession, including some in Father Calloway’s book.

Those with a St. Joseph statue should put it someplace where it can be seen and honoured, he said.

“Upside-down statues don’t sell houses,” Father Margevicius said. “Instead of turning away from God and going for superstitious solutions to my problems, the more intense I feel, the more intense should be my prayer to God.”

This Was the Man Karol Wojtyla

100 Years After Canonisation, Joan Of Arc Remains A Symbol For Many