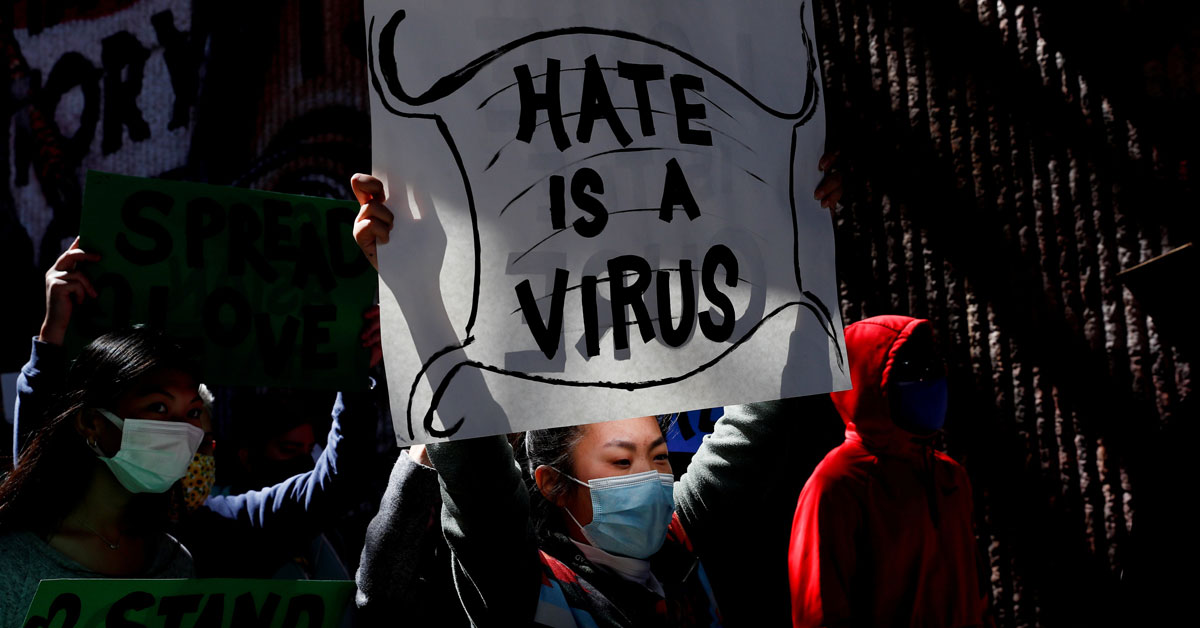 By Carol Zimmermann– In the days following the March 16 shootings in Atlanta that left eight people dead, including six Asian American women, protests and vigils took place around the country remembering the victims and calling for an end to a growing wave of anti-Asian racism and violence.

Catholic bishops and women religious also spoke out against the violence and renewed their calls to end racism.

“We must support all victims of violence and stand in solidarity with those who are vulnerable in our communities,” said Atlanta Archbishop Gregory J. Hartmayer in a March 17 statement.

He also pointed out many people “endure discrimination, aggression and violence every day of their lives,” and said Christians must work to protect the whole community, speaking up against aggression and actively pursuing an end to “racism and discrimination of every kind.”

Bishop Oscar A. Solis of Salt Lake City, chairman of the U.S. Conference of Catholic Bishops’ Subcommittee on Asian and Pacific Island Affairs, echoed the Atlanta archbishop’s call to stand in solidarity with the vulnerable.

In a March 22 statement, he said the Atlanta shootings have “prompted national dialogue on addressing anti-Asian bias that has taken the form of numerous other acts of physical violence, verbal attacks and destruction of property against those of Asian descent over the last year that have left communities across the country traumatised.”

The bishop said he was deeply saddened the mass shooting has “tragically taken the lives of eight people and has renewed concerns about a rise of hostility against individuals of Asian descent.”

“As bishops, we decry any kind of hatred and violence, particularly based on race, ethnicity or sex,” he said. “We pray for the families and friends of those who were lost, and for their communities, who may feel unsafe and vulnerable at this time.”

Although the suspect, 21-year-old Robert Long of Woodstock, Georgia, has been arrested and charged with eight counts of murder and one count of aggravated assault for the shootings at three spas in the Atlanta metro area, he has not yet been charged with a hate crime.

Investigators are still looking into if the crimes were racially motivated or if, as Long claimed, they were committed to end his temptation because he is a sex addict.

Long, a member of Crabapple First Baptist Church in Milton, Georgia, had been treated at an inpatient addiction facility, HopeQuest Ministry Group, which specialises in treating sex and pornography addictions.

But as Atlanta Mayor Keisha Lance Bottoms put it to reporters the day after the shootings: “Whatever the motivation was for this guy, we know that the majority of the victims were Asian. We also know that this is an issue that is happening across the country. It is unacceptable, it is hateful and it has to stop.”

The shootings touched a nerve across the country in response to a growing wave of anti-Asian violence, particularly since the outbreak of the coronavirus which began in Wuhan, China, last year and had often been referred to by former President Donald Trump as the “China virus” or “kung flu.”

Chicago Cardinal Blase J. Cupich specifically addressed “brothers and sisters in the Asian American community” in a March 18 statement, telling them they should know the archdiocese and the entire church stands with them “in this moment of grief and horror.”

He noted there has been a 150% increase in anti-Asian hate crimes in the past year, and that while hate crimes in general dropped 7%, this situation is intolerable.

“We pray for all who suffer racist violence and hate speech,” Cardinal Cupich said. “There can be no place for either in our society, and it is incumbent on all of us to resist language, culture and acts that denigrate Asian Americans and all people of colour – because they have deadly consequences.

“We must be ever vigilant against words that inspire acts of hate – this responsibility is even greater for elected officials.”

The group AAPI Hate, an advocacy group that tracks hate incidents against Asian Americans and Pacific Islanders, said it had received about 3,800 reports of hate incidents across the country since last March, up from its usual total of 100 incidents a year.

Detroit Archbishop Allen H. Vigneron also noted the Atlanta-area shootings occurred against a backdrop of an “increase in reports of verbal and physical assaults against Asians and Asian Americans” since the start of the COVID-19 pandemic.

“During this time, we have witnessed with growing alarm the increase in reports of verbal and physical assaults against Asians and Asian Americans,” the archbishop said March 21.

“While violence of any kind is wrong,” he said, “violence born of racism is a particular evil that must be condemned and eradicated. It has no place in our society.”

The archbishop, who is USCCB vice president, said the Atlanta shootings “cut deep into existing wounds carved over the past year” and urged prayers for the victims and their grieving friends and families.

The general council of the Dominican sisters of Adrian, Michigan, also called for an end to the violence against Asian Americans and people from the Pacific Islands and urged Congress to enact strong legislation against hate crimes.

Days after the Atlanta shootings, President Joe Biden said he urged Congress to pass the COVID-19 Hate Crimes Act. He said the measure would expedite the federal government’s response to hate crimes that have risen during the pandemic, support state and local governments to improve hate crimes reporting and make information on hate crimes more accessible to Asian American communities.

He and Vice President Kamala Harris met with Asian American leaders in Atlanta March 19. After the meeting, Biden told reporters the conversation echoed what he has heard across the country, namely that hate and violence are often met with silence.

“That’s been true throughout our history, but that has to change because our silence is complicity,” he said.

While the Adrian Dominicans stressed the need for strong hate-crime legislation, they also said they were praying “for a profound conversion of heart among us all that we may root out the racism that continues to cause such injury to our sisters and brothers of colour and to erode the moral fabric of our nation.”

With Zimbabwe in Turmoil over Fuel Hikes, Archbishop calls for Restraint

Why You Must Smile With Your Eyes

Pope Baptises Twins After Successful Surgery To Separate Them
Share