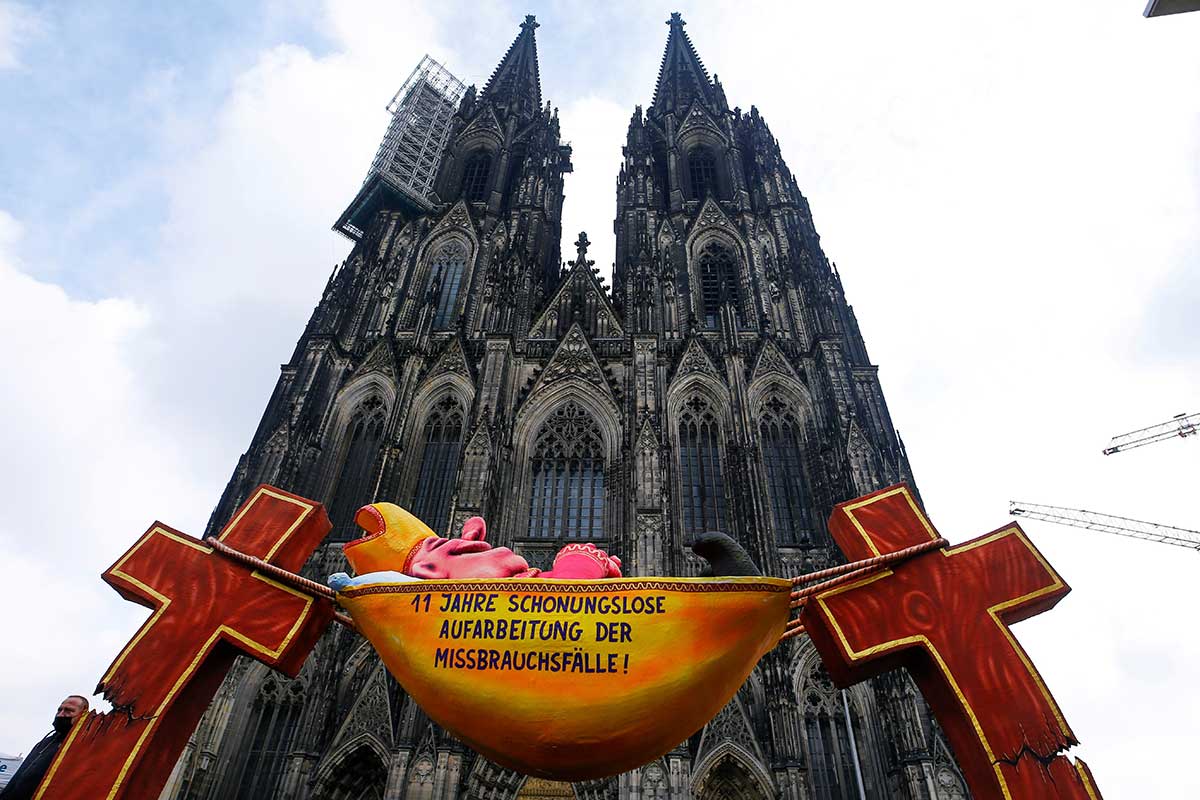 A carnival float showing an unnamed bishop placed in front of the Cologne cathedral in Germany by activists of the Giordano Bruno Foundation as they protest against sexual abuse by priests. The wording on the float reads the ironic words “11 years of unsparingly investigating cases of sexual abuse”. (CNS photo/Thilo Schmuelgen, Reuters)

Hamburg Archbishop Stefan Hesse has offered his resignation to Pope Francis in the wake of a report on the Cologne Archdiocese’s handling of abuse cases.

“In order to avert damage to the office of the archbishop as well as the Hamburg Archdiocese, I am offering Pope Francis my resignation from office and am asking him to immediately release me from my duties,” Archbishop Hesse said in a statement broadcast live on the internet March 18, the day the report was released.

The German Catholic news agency KNA reported that this makes Archbishop Hesse, 54, the first German diocesan bishop to take personal responsibility in the abuse scandal. He had served as personnel chief in Cologne starting in 2006 and was vicar general in Cologne from 2012 to 2015, the year he was named archbishop of Hamburg. Cologne Auxiliary Bishop Dominik Schwaderlapp, 53, former vicar general of the Cologne Archdiocese, also offered his resignation.

It is unknown how long it will take for Pope Francis to respond to the resignation offers.

In his announcement, Archbishop Hesse said: “I greatly regret if I, through my actions or the lack thereof, inflicted new suffering on the victims and their families. … I never took part in a cover-up.” However, he said, he was prepared to shoulder his part of the responsibility for the failure of the system.

Archbishop Hesse stressed that he had always performed his duties “to the best of my knowledge and conscience.” He said he had met with many abuse victims and sought to understand them. “Throughout it all I was, and am, aware that I made mistakes.”

Archbishop Hesse and Bishop Schwaderlapp were incriminated in the report on the handling of abuse cases.

At the end of 2018, Cologne Cardinal Rainer Maria Woelki had commissioned a Munich law firm to examine the archdiocesan leadership’s handling of cases of sexual violence. After additional law professors were asked for advice on the completed report and declared that it contained “methodological deficiencies,” the cardinal cancelled his cooperation with the law firm and commissioned a new report from Cologne criminal lawyer Björn Gercke.

After the first accusations against Archbishop Hesse had become known late last year, the prelate informed the Vatican of the allegations. At the same time, the archbishop stopped his duties as spiritual assistant to the laypeople’s Central Committee of German Catholics.

The Gercke report named Archbishop Hesse in 11 violations of duty in nine cases during his time in Cologne. Specifically, he was found to have neglected initiating church procedures to investigate abuse allegations and in several cases not to have alerted state prosecutors or the Vatican.

Immediately after the report was presented, Cardinal Woelki – who was exonerated of any dereliction of duty – suspended Bishop Schwaderlapp until further notice. The report had cited eight cases of violation of duty during the bishop’s period as vicar-general.

On March 19, Auxiliary Bishop Ansgar Puff, 65, was temporarily suspended of his duties; he requested this step from Cardinal Woelki. The report cited one violation of duty by Bishop Puff during his time as head of personnel in Cologne in 2012 and 2013, when he was found to have violated the disclosure rules in one case. Bishop Puff remains suspended from his duties pending clarification of the circumstances of the case.

KNA reported the abuse report triggered calls from the political sector, church officials and laypeople’s groups for consequences to be taken.

German Justice Minister Christine Lambrecht said the “long overdue independent clarification” was still only getting started. The German government’s independent commissioner for sexual abuse issues, Johannes-Wilhelm Rörig, described the extent of the violations listed in the report as “horrifying.” The investigation posed an “important mosaic stone” and now an independent investigation commission of victims and experts must be quickly established, he said.

The Central Committee of German Catholics said the report posed a “clear order for reforms.” Every diocese must learn from the failures in Cologne, it said.

Several Catholic groups issued calls to all the country’s bishops to assure “absolute transparency and a maximum of independent control” in dealing with abuse issues, KNA reported.

In the view of the Vatican’s expert for abuse issues, Jesuit Father Hans Zollner, the measures taken thus far had been “much too small a step.” From the viewpoint of the victims, the “clearly chosen purely legal perspective” of the report was not sufficient, he told KNA.

Matthias Katsch, spokesman for the victims association “Eckiger Tisch” (“Nonround-Table”), said the report did not clear up the moral or canonical issues and neglected the perspective of the victims.

The Catholic reform initiative We Are Church called on Cardinal Woelki also to submit his resignation. The cardinal had long served as secretary to the late Cardinal Joachim Meisner, who was accused of many mistakes in the report. The group said it was difficult to believe that Cardinal Woelki was unaware of them.