In Silent Church of the Beatitudes, Franciscan Nuns Expand their Prayers 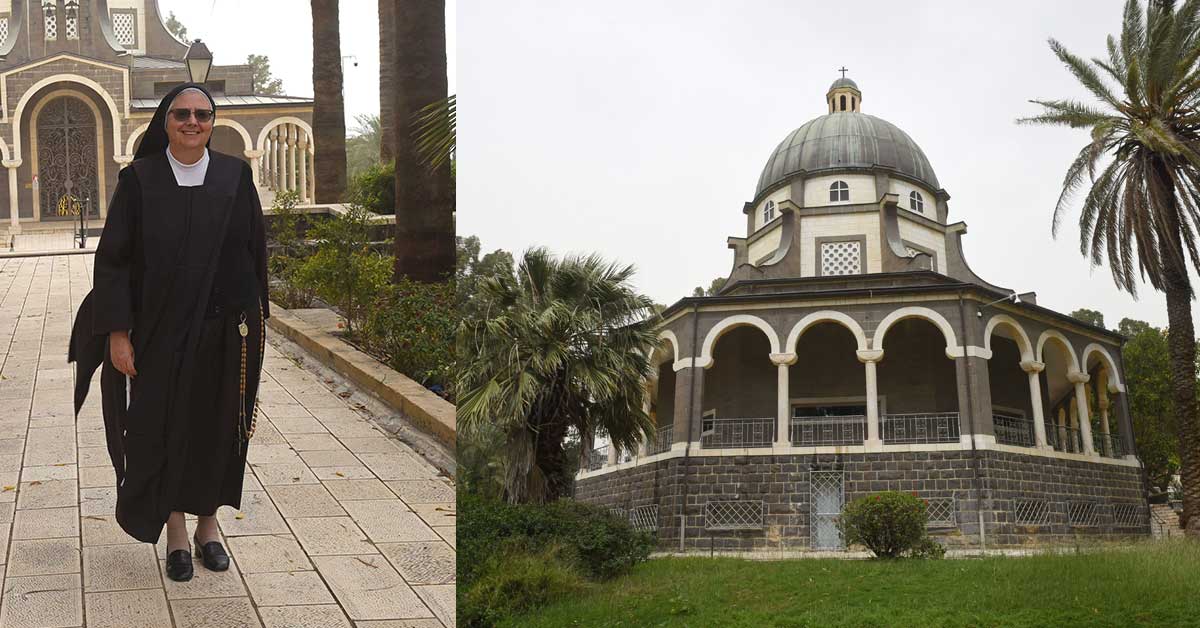 Sister Telesphora Pavlou, superior of the Franciscan Sisters of the Immaculate Heart of Mary convent, stands outside the guesthouse near the chapel of the Church of the Beatitudes by the Sea of Galilee in Israel March 24, 2021. The guesthouse and church have been empty of visitors for a year because of the COVID-19 pandemic. (CNS photo/Debbie Hill)

By Judith Sudilovsky – The palm tree fronds in the convent garden of the Franciscan Sisters of the Immaculate Heart of Mary rustle loudly in the brisk wind of an early spring dust storm, but, stepping into the chapel of the Church of the Beatitudes, there is silence.

It is a deep and solitary silence the five Franciscan Sisters at the convent were not accustomed to, especially not during the Easter season, when a thousand pilgrims a day would come to pray and contemplate at the site where, according to Christian tradition, Jesus delivered the sermon on the mount.

Since March 13, 2020, there have been no pilgrims except for an occasional local visitor, said Sister Marcelle Wardeh.

“Of course we miss the people, we are used to having lots of people come to pray,” she said.

As they realised the consequences of COVID-19 would be more widespread and long term than they could have imagined, the sisters began to pray for pilgrims who were sick or had died and for their families, said Sister Telesphora Pavlou, superior of the convent. They prayed for the pilgrims who had hoped to visit the Holy Land and were forced to cancel their trips. They also prayed for the end of the pandemic and all suffering.

“It is a great sufferance to see suddenly empty all this beautiful paradise,” she said.

In addition to missing the presence of the pilgrims praying at the church and at various outdoor prayer chapels throughout the gardens, the sisters also miss the presence of visitors at their guesthouse, which opened in 2010 and could accommodate about 150 people. Without that income, they have been left with unpaid debts to contractors and have had to ask for an extension and change in payment terms, said Sister Pavlou.

“Suddenly we were left with nothing,” she said, and though they held on for as long as they could, they also had to lay off their 40 employees.

But the quiet and solitude also afforded the sisters the opportunity to contemplate the beauty of the creation they had around them, said Sister Pavlou. For some of the sisters, who are members of a missionary order, the silence was difficult, she said.

“The sisters pass the time in contemplation of creation, the beauty of nature and the animals and birds of many kinds that appeared in the area,” she said. “I have been able to contemplate more my faith, to be more united with God. To thank God also for his gifts, to see all the beautiful nature blossoming. To see the gifts in the silence. We need silence in the world sometimes.”

One evening, she said, she took a solitary walk around the expansive garden and came face-to-face with a Galilee wolf.

“Suddenly in the dark I met a wolf, and he saw me too. Then he retreated back. I was marvelled,” she said. Wild boars, jackals and birds of all kinds have also visited the garden in the absence of pilgrims, she said. “Maybe they were here before, too, but I didn’t pay attention.”

During the days of Lent, the penance has been more intensive, she said. She has thought of the people affected by COVID-19, those who have had to die alone without loved ones to hold their hands; of children who need to go to school but are unable to; those who have suffered sexual violence; or those who have been victims of mass shootings, such as the recent incident in Boulder, Colorado.

As the Jewish Passover and Easter holidays approach with their messages of renewal as well as vacation time for locals – and with 60% of the Israeli population having had at least the first of the two COVID-19 vaccines – Sister Pavlou said they would once again be opening up for visitors.

They are waiting with open hearts and arms for the time when all pilgrims will be able to visit, she added.

“At the end, God is just, and full of love and mercy,” she said. “For me, every breath is a prayer, and we thank God that we are still in this beautiful life, even through the difficulties.”

Tags: Church of the Beatitudes