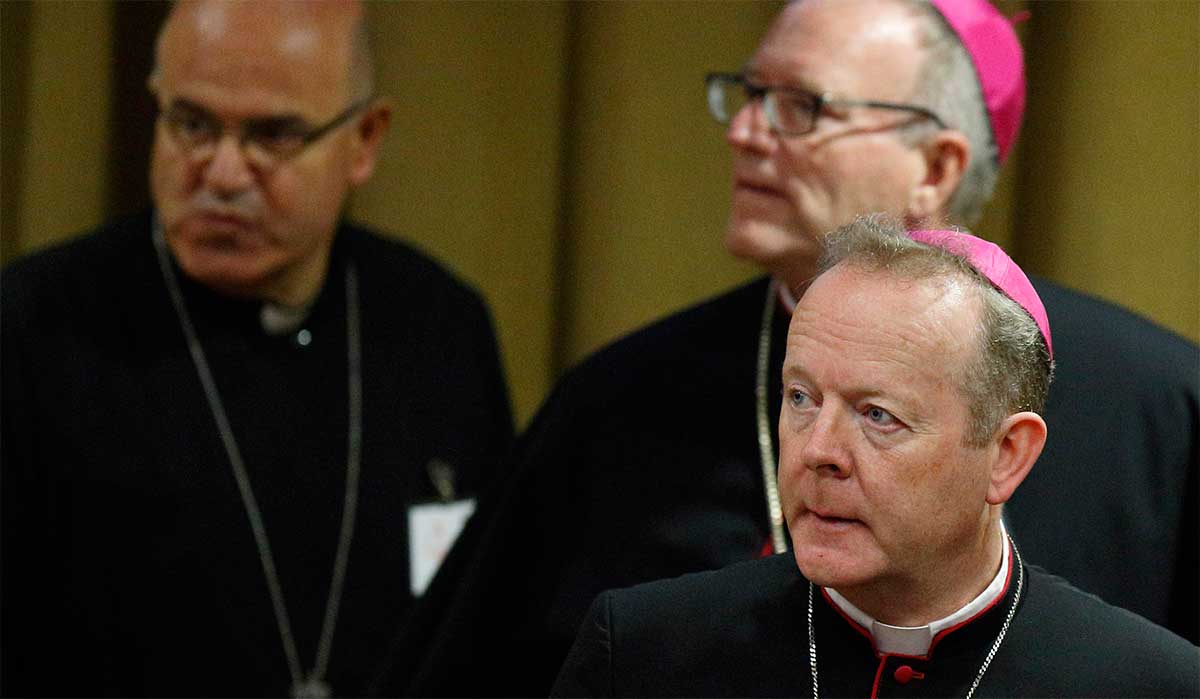 Archbishop Eamon Martin of Armagh, Northern Ireland, right, arrives for a session of the Synod of Bishops on young people, the faith and vocational discernment at the Vatican. Irish bishops have announced a plan for a national synod within five years to hear from people who were raised Catholic but have left the church. (CNS photo/Paul Haring)

By Michael Kelly – Ireland’s Catholic bishops plan to hold a synod within the next five years to – among other things – hear from people who were raised Catholic but have walked away from the church.

A statement released after the bishops’ conference virtual general assembly explained that the prelates believe “a synodal pathway leading to a national synod is inviting us to journey together in discernment of what the Holy Spirit is saying to the church in Ireland at this time.”

The bishops said they are “acutely aware of the huge challenges to the Catholic faith” that have emerged during the past 50 years, including the rapid transformation and secularisation of society, that have led to a fewer people practising the faith and a decline in religious vocations.

They also expressed concern for the many people who left the church and “in some cases feel ignored, excluded or forgotten” and that those voices need to be heard.

Since his election in 2013, Pope Francis has said he wanted to breathe fresh life into the concept of synodality articulated at the Second Vatican Council in the 1960s.

A recent document from the Vatican’s Congregation for the Doctrine of the Faith defined the principle of synodality as “the action of the Spirit in the communion of the Body of Christ and in the missionary journey of the People of God.”

In the Irish context, the process is expected to lead to a national gathering of laypeople, priests, bishops and religious women and men to chart a new pastoral program for the church’s future.

The church leaders acknowledged that “we hear a cry for transparency, greater participation and accountability in the church.”

The process also will especially include the voices of women, the bishops said.

“While many women are very engaged in church life in Ireland, we acknowledge the critical need to honour the contribution of women, to hear their deep concerns, to formally recognize their roles and articulate new models of co-responsibility and leadership involving all laypeople — women and men.

The plan calls for two years of prayer, listening and discernment that will coincide with a nationwide consultative process.

A task force is expected to be established this summer involving laypeople, religious, priests and bishops.

“As we embark on the synodal pathway, we ask for prayers that this may be a time of renewal, reform and new hope for all the people of God in Ireland,” the statement concluded.

Church Welcomes All, Calls All to Conversion