Pope Benedict Talks about his Resignation 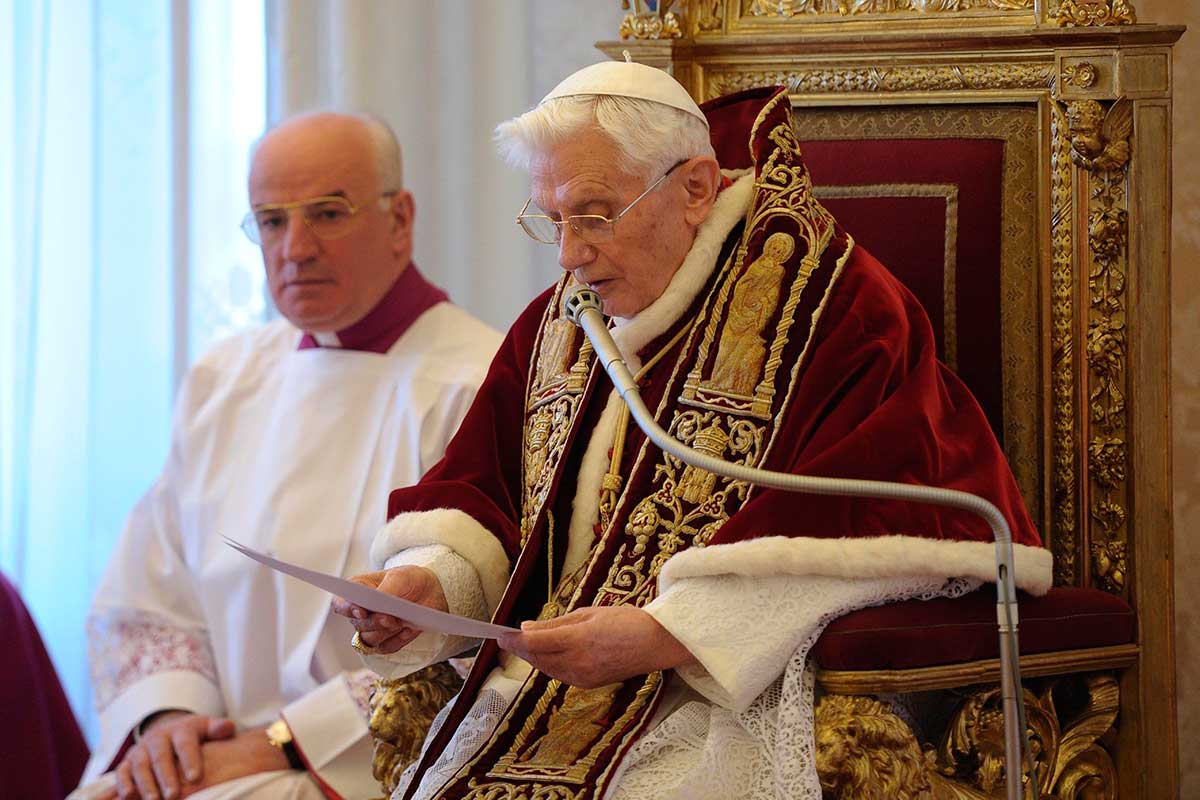 Pope Benedict XVI reads his resignation in Latin during a meeting of cardinals at the Vatican in this Feb. 11, 2013, file photo. Speaking of his resignation, the retired pope recently told the Italian newspaper Corriere della Sera that “it was a difficult decision, but I made it in full awareness, and I believe it was correct.” (CNS photo/Vatican Media)

By Cindy Wooden – Although it took obvious effort to pronounce each word and sometimes his secretary repeated what he said to make it clear, retired Pope Benedict XVI spoke to an Italian newspaper about his retirement and about Pope Francis’ planned trip to Iraq.

The retired pope, who will turn 94 in April, resigned February 28, 2013. He lives in the Mater Ecclesia Monastery in the Vatican Gardens where he and his personal secretary, Archbishop Georg Ganswein, met in February with the director of the newspaper Corriere della Sera.

“His words come out drop by drop; his voice is a whisper that comes and goes,” according to the article published on the anniversary of his resignation. Sometimes, the report said, Archbishop Ganswein “repeats and ‘translates,’ while Benedict nods in a sign of approval.”

Asked if he thinks a lot about his decision to resign, “he nods,” the newspaper said.

“It was a difficult decision, but I made it in full awareness, and I believe it was correct,” the retired pope said. “Some of my slightly ‘fanatical’ friends are still angry; they did not want to accept my decision.”

Pope Benedict is aware of what he termed “conspiracy theories” about why he resigned. “Some have said it was because of the Vatileaks scandal,” created when his butler leaked private documents to a journalist, he said. Others thought it was “a plot by the gay lobby,” a supposed group of Curia officials who protect each other.

And, he said, some thought it was because of the case of Bishop Richard Williamson, who had been excommunicated in 1988 when he and three other traditionalist bishops were ordained against papal orders by the late French Archbishop Marcel Lefebvre, founder of the Society of St. Pius X.

Pope Benedict lifted the excommunications in 2009 as a first step toward beginning formal talks aimed at reconciliation with the group. However, there was widespread outrage at revelations that Bishop Williamson had denied the gassing of Jews in Nazi concentration camps. The Vatican said the pope had been unaware at the time of the bishop’s radical views on the Holocaust.

Many of Pope Benedict’s supporters, he said, don’t want to believe his resignation “was a conscious decision” that had nothing to do with outside pressure. “But my conscience is clear.”

Corriere described the retired pope as alert, even though it was difficult to understand his speech at times. His wrists are “extremely thin, which underlines an image of great physical frailty.” He wears a watch on his left wrist and an emergency alarm on his other, the newspaper said.

“I think it is a very important visit,” he said. “Unfortunately, it comes at a very difficult time that makes it a dangerous trip for security reasons and because of COVID.”

And, in fact, Archbishop Mitja Leskovar, the Vatican nuncio to Iraq, who was supposed to host the pope throughout the trip, tested positive for the coronavirus and has gone into quarantine, the nunciature announced Feb. 27.

“I will accompany Francis with my prayers,” the retired pope said.

“It’s true, he is a practising Catholic, and personally against abortion,” the retired pope said. “But as president, he tends to present himself in continuity with the platform of the Democratic Party. And on gender policy, we still don’t have a clear idea of his position.”