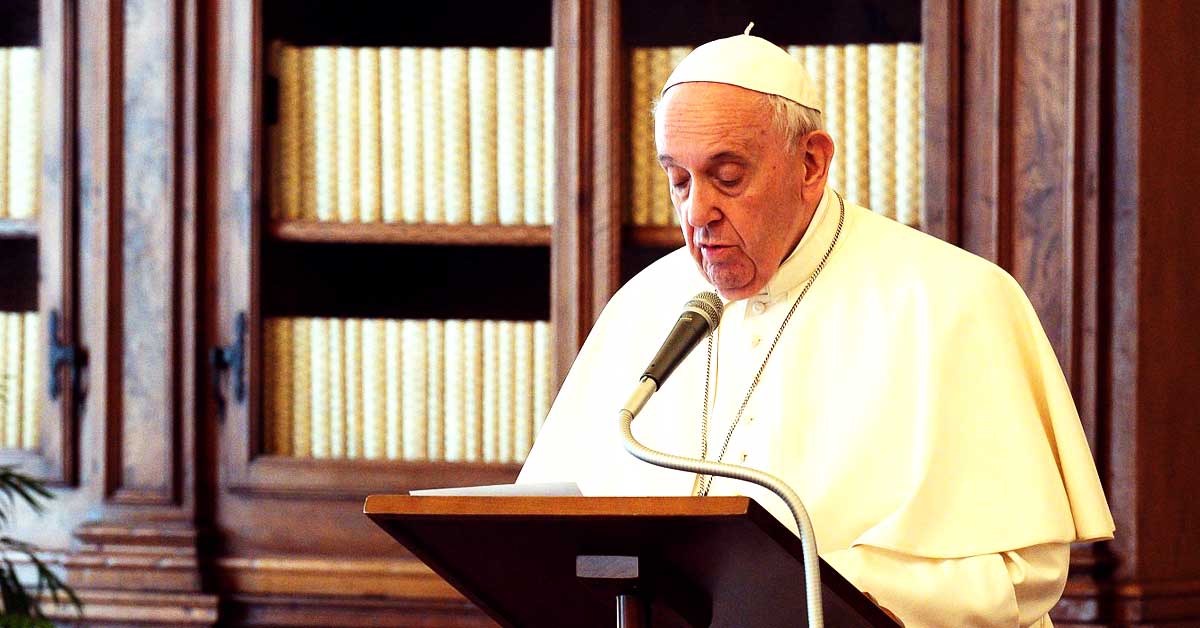 Pope Francis leads the Angelus in the library of the Apostolic Palace at the Vatican March 21, 2021. The pope condemned the Mafia’s exploitation of the COVID-19 pandemic. (CNS photo/Vatican Media)

By Junno Arocho Esteves – Pope Francis condemned the way the Mafia is exploiting the COVID-19 pandemic by taking advantage of those in dire economic circumstances.

Marking Italy’s national day of remembrance for victims of the Mafia March 21, the pope accused members of organised crime groups of “enriching themselves through corruption,” and he urged Christians to renew their commitment against the Mafia and related groups.

“St John Paul II denounced their ‘culture of death’ and (Pope) Benedict XVI condemned them as ‘ways of death.’ These structures of sin, Mafia structures, contrary to Christ’s Gospel, exchange faith with idolatry,” he said.

According to a Feb. 24 report by the Financial Times, the Italian interior ministry’s study on organised crime said that in the first months of the pandemic, the Mafia used the country’s economic crisis to take over many small businesses.

Italy’s Anti-mafia agency, known by the Italian acronym DIA, said mafia organisations gave “companies in difficulty a form of social welfare as an alternative to (public and private sector) institutions, but then adopt the traditional intimidatory conduct aimed at acquiring control of their economic activities,” the Financial Times reported.

Throughout his papacy, Pope Francis has strongly criticised the Mafia’s use of popular religiosity and violence to exploit the poor and the suffering.

During his 2018 visit to Sicily to mark the 25th anniversary of the death of Father Pino Puglisi, a priest gunned down by the Mafia in 1993, the pope said the organisation’s criminal activities “blaspheme the name of God, who is love.”

“No to the Mafia mentality, to illegality, to the logic of crime, which are corrosive poisons for human dignity,” the pope said. “No to every form of violence. Those who use violence are not human.”

Before praying the Angelus prayer, Pope Francis reflected on Christians’ responsibility to give witness to Jesus through “closeness, compassion and tenderness” that is “given in service.”

To be of service, he added, means “sowing seeds of love, not with fleeting words but through concrete, simple and courageous examples; not with theoretical condemnations, but with gestures of love.”

“Then the Lord, with his grace, makes us bear fruit, even when the soil is dry due to misunderstandings, difficulty or persecution, or claims of legalism or clerical moralism. This is barren soil,” he said.

Pope: Consolation Comes Even in Martyrdom

Pope Baptises Twins After Successful Surgery To Separate Them
Share