Pope in Iraq: Cleanse your Hearts of Anger, Live the Gospel 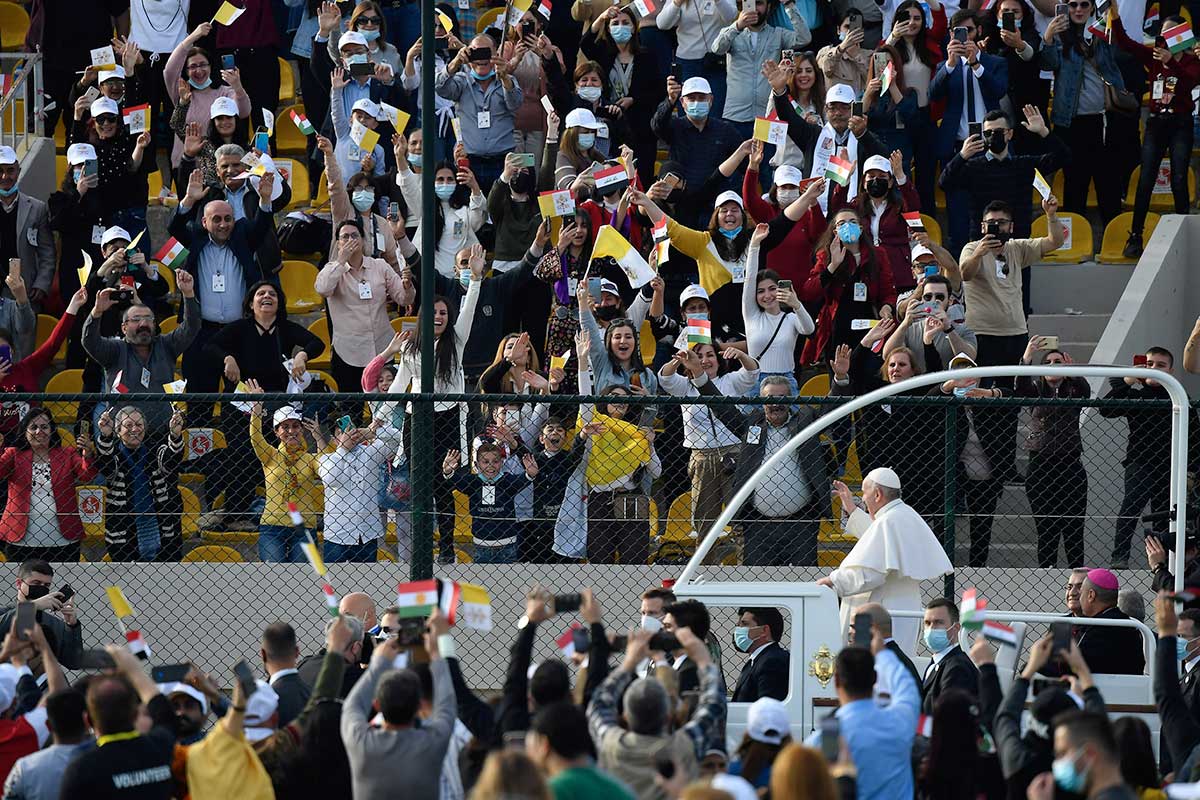 By Cindy Wooden – Having witnessed or even experienced persecution for their faith, the Christians of Iraq must be careful not to harbour thoughts of revenge, Pope Francis told them.

After a full morning paying tribute to the victims of Islamic State violence, Pope Francis reached the last major event of his trip to Iraq: Mass March 7 with some 10,000 people at Irbil’s Franso Hariri Stadium. Many ignored the social distancing measures put in place, and few wore the masks they were required to have because of the COVID-19 pandemic.

Irbil, capital of the Kurdistan autonomous region in northern Iraq, hosts Syrian refugees and hundreds of thousands of displaced people, particularly Christians, from Mosul, Qaraqosh and other towns that had been under the thumb of Islamic State militants in 2014-2017. 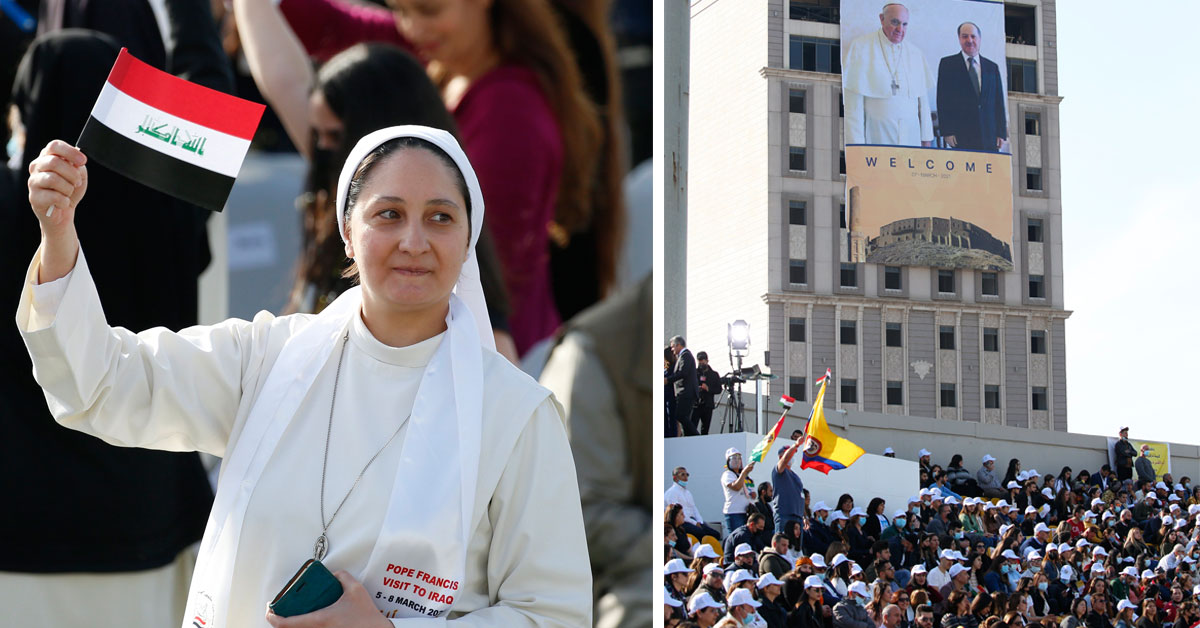 After blessing the altar with incense, Pope Francis blessed a partially restored statue of Mary from a parish in Karmless. The Islamic State militants decapitated the statue and cut off its hands. The restoration re-attached the head, but left the hands dangling.

“Here in Iraq, how many of your brothers and sisters, friends and fellow citizens bear the wounds of war and violence, wounds both visible and invisible,” the pope told the crowd. “The temptation is to react to these and other painful experiences with human power, human wisdom,” but the path of Jesus was to serve, to heal, to love and to offer his life for others.

Referring to St. John’s Gospel account of Jesus cleansing the temple, Pope Francis said Jesus did not want his Father’s house to be a marketplace, and “neither does he want our hearts to be places of turmoil, disorder and confusion.” 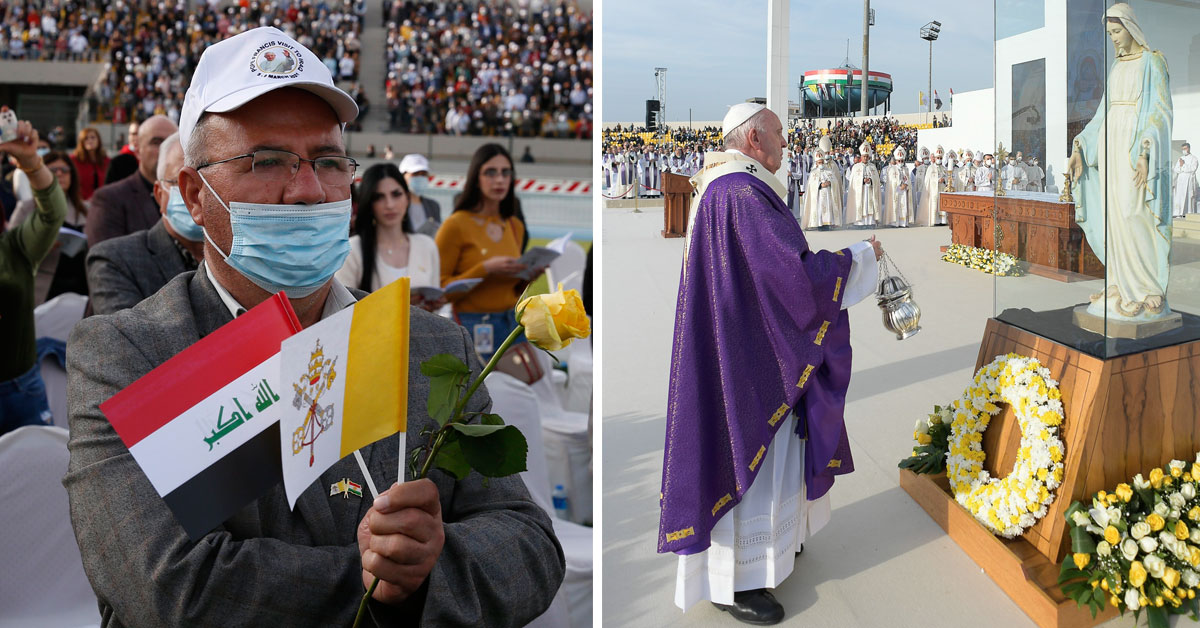 A man wearing a protective mask holds a rose and the Vatican and Iraqi flags as Pope Francis celebrates Mass at Franso Hariri Stadium in Irbil, Iraq, March 7, 2021. (CNS photo/Paul Haring). Pope Francis swings a censer near a partially restored statue of Mary from a parish in Karmless. The Islamic State militants decapitated the statue and cut off its hands. The restoration re-attached the head, but left the hands dangling. (CNS photo/Vatican Media)

“Our heart must be cleansed, put in order and purified,” the pope said.

Anything that leads a person away from God or causes them to ignore the suffering of others must be cleansed, he said. “We need the baneful temptations of power and money to be swept from our hearts and from the church.”

But, the pope told them, “to cleanse our hearts, we need to dirty our hands, to feel accountable and not to simply look on as our brothers and sisters are suffering.”

Through his own suffering, death and resurrection Jesus “liberates us from the narrow and divisive notions of family, faith and community that divide, oppose and exclude, so that we can build a church and a society open to everyone and concerned for our brothers and sisters in greatest need. ”

“At the same time,” the pope said, “he strengthens us to resist the temptation to seek revenge, which only plunges us into a spiral of endless retaliation.”

With faith in Jesus and the experiences of the past decade, Pope Francis told them, the Holy Spirit sends them forth “as missionary disciples, men and women called to testify to the life-changing power of the Gospel.” 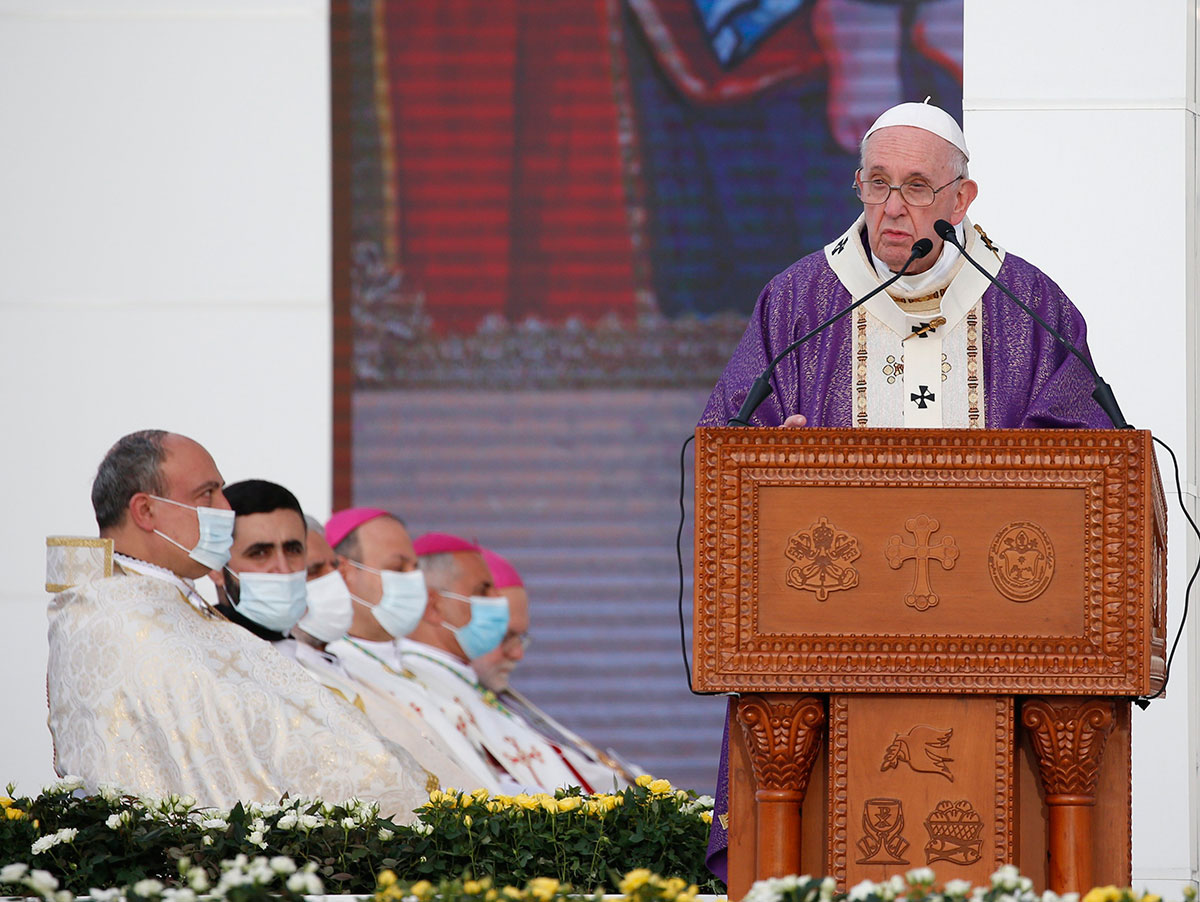 At the end of Mass, Chaldean Catholic Archbishop Bashar Warda of Irbil thanked the pope for travelling to Iraq during the pandemic, telling the pontiff he made real the saying, “Do not be afraid.” The archbishop said Iraqis must give life to the pope’s message of peace, brotherhood and forgiveness.

Then Pope Francis addressed the crowd – and those watching on television: “Now the time I must leave for Rome draws near. But Iraq will always remain with me in my heart. I ask all of you, dear brothers and sisters, to work together in unity for a future of peace and prosperity that leaves no one behind and does not discriminate against anyone. I pray that members of the different religious communities, together with men and women of good will, cooperate to strengthen the bonds of fraternity and solidarity at the service of the good and for peace. Salaam, salaam, salaam, shukran and God bless everyone, God bless Iraq, Allah ma’akum (God be with you).”

The Mass was the last large public event of Pope Francis’ March 5-8 visit. After the Mass, he returned to Baghdad. He was scheduled to leave Iraq and return to Rome the following morning.

Pope: Church is a Mother to All, Remains Close to those who Suffer

Why Should Christians Care About Iraq?