Pope in Iraq: Life Triumphs over Death as Christians Rebuild in Iraq 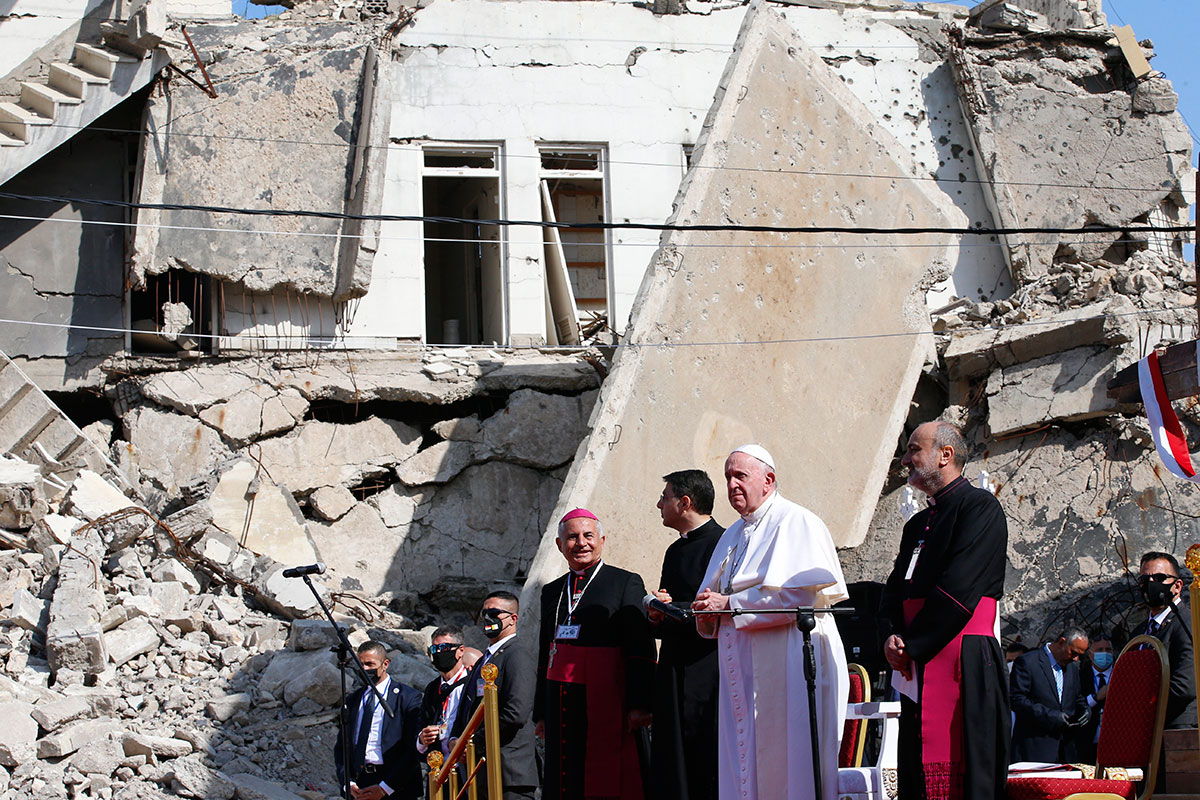 Pope Francis participates in a memorial prayer for the victims of the war at Hosh al-Bieaa (church square) in Mosul, Iraq, March 7, 2021. (CNS photo/Paul Haring)

By Cindy Wooden – Amid the rubble and bombed out remains of four churches destroyed by Islamic State militants, Pope Francis paid tribute to Iraqi Christians who endured persecution and even death.

But visiting Mosul and Qaraqosh in northern Iraq March 7, he also urged the Christians to live up to their faith and honour the sacrifice of those who died by promoting peace and reconciliation.

Much of Mosul’s old city centre remains in ruins or under reconstruction. And Pope Francis stood in Hosh al-Bieaa, church square, facing some of those ruins: the remains of the Syriac Catholic, Armenian Orthodox, Syriac Orthodox and Chaldean Catholic churches all destroyed between 2014 and 2017.

His message was clear:

“If God is the God of life – for so he is – then it is wrong for us to kill our brothers and sisters in his name.

“If God is the God of love – for so he is – then it is wrong for us to hate our brothers and sisters.”

In Mosul, 250 miles north of Baghdad, Pope Francis listened to the stories of Christians forced to flee, the fear many have to return and the encouragement of Muslim neighbours committed to making the city a thriving, multicultural metropolis again. 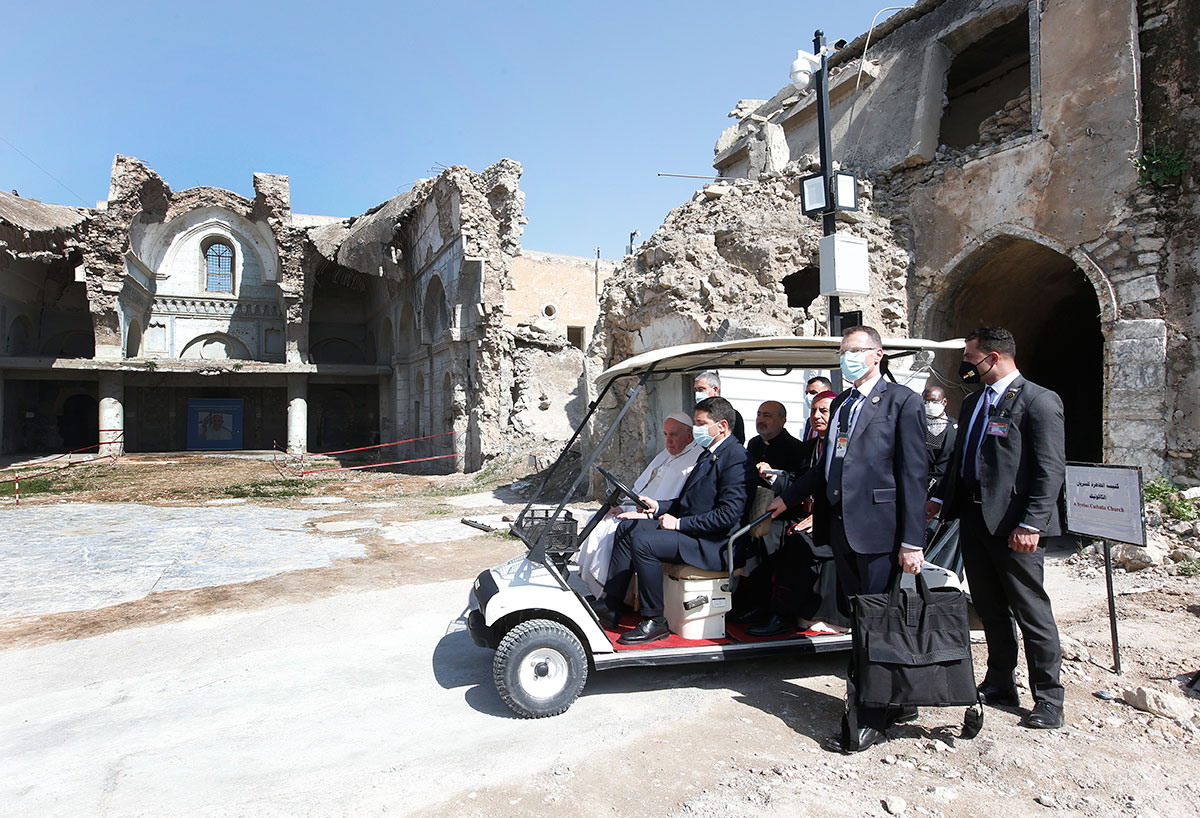 But he also heard choirs of children singing in welcome, women ululating to honour his arrival and the cheers of young people waving flags.

Father Raid Adel Kallo, pastor of Mosul’s Church of the Annunciation, told the pope that he and many of his people left the city in June 2014; at that point, he said, his parish had 500 families. “The majority have emigrated abroad,” but 70 families have returned. “The rest are afraid to come back.”

The 2003 invasion of Iraq by U.S. and coalition forces battered the city but the biggest, most horrifying blow came in early June 2014 when militants of the Islamic State group launched an offensive. They controlled the city for three years, terrorizing the population, executing hundreds and kidnapping, raping and selling women. They blew up major landmarks, both Muslim and Christian. They destroyed libraries and museums and tens of thousands of lives.

Offering prayers “for all the victims of war and armed conflict,” Pope Francis said Mosul is concrete proof of the “tragic consequences of war and hostility.”

“Today, however, we reaffirm our conviction that fraternity is more durable than fratricide, that hope is more powerful than hatred, that peace more powerful than war,” the pope said. “This conviction speaks with greater eloquence than the passing voices of hatred and violence, and it can never be silenced by the blood spilled by those who pervert the name of God to pursue paths of destruction.”

Dr. Rana Bazzoiee, a 37-year-old pediatric surgeon, who fled Mosul to Irbil in 2013, told reporters, “I don’t like to remember that moment.”

Before the Islamic State fighters came, “we were living here in Mosul all together — Christians, Muslims” — and “we couldn’t believe something like that would happen. I think nobody stayed here. All the Christians left.” 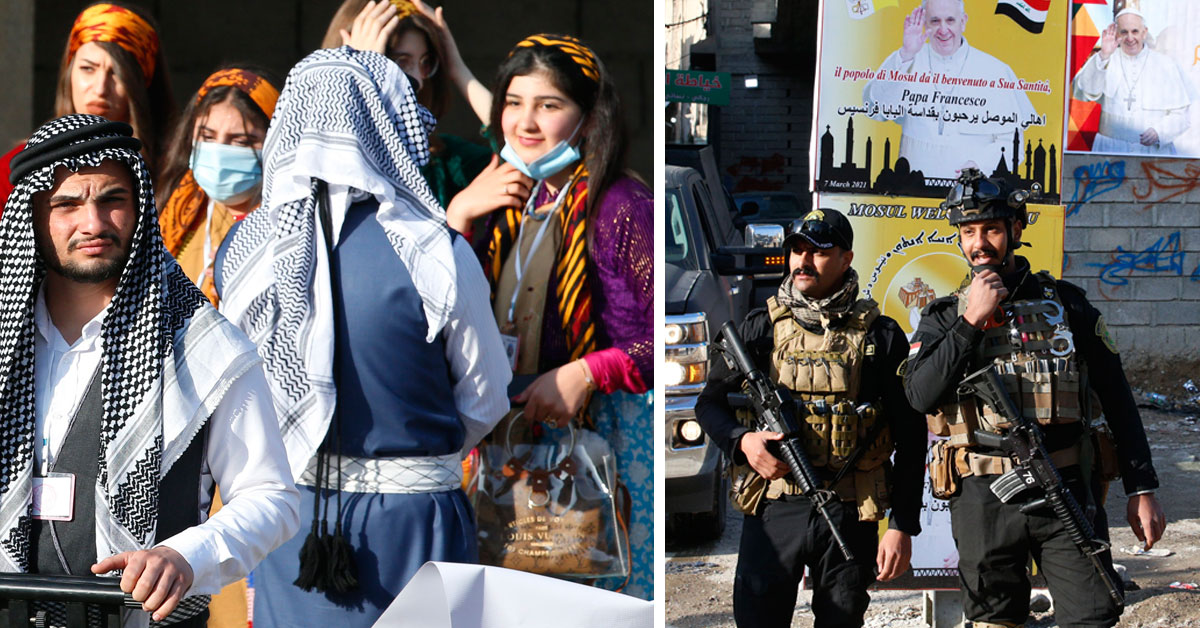 Explaining that her Muslim and Yazidi friends helped her in those dark days, Bazzoiee said she is not angry, and she hopes the pope’s visit will help the process of getting life back to normal.

“Why not?” she said. “We lived together for a long time in Mosul.”

After the prayer service and a private visit to the ruined churches, Pope Francis took a helicopter about 20 miles Qaraqosh, a majority Christian city that also suffered devastation at the hands of the Islamic State group. Less than half of the city’s inhabitants have returned since the militants were ousted in 2016.

Mounir Jibrahil, a 61-year-old math teacher, said he came back in 2016, but only finished rebuilding his house last year.

“Now it’s safer here,” he said. “It’s great to see the pope; we never expected him to come to Qaraqosh. Maybe that will help to rebuild the country, finally bringing love and peace.”

The largest crowds of the pope’s March 5-8 visit to Iraq lined the streets in Qaraqosh. While security concerns meant leaving the popemobile in Rome and using an armoured Mercedes Benz in the town, the pope had the window down and the driver going slow enough that the police and security officers on foot did not even have to jog. 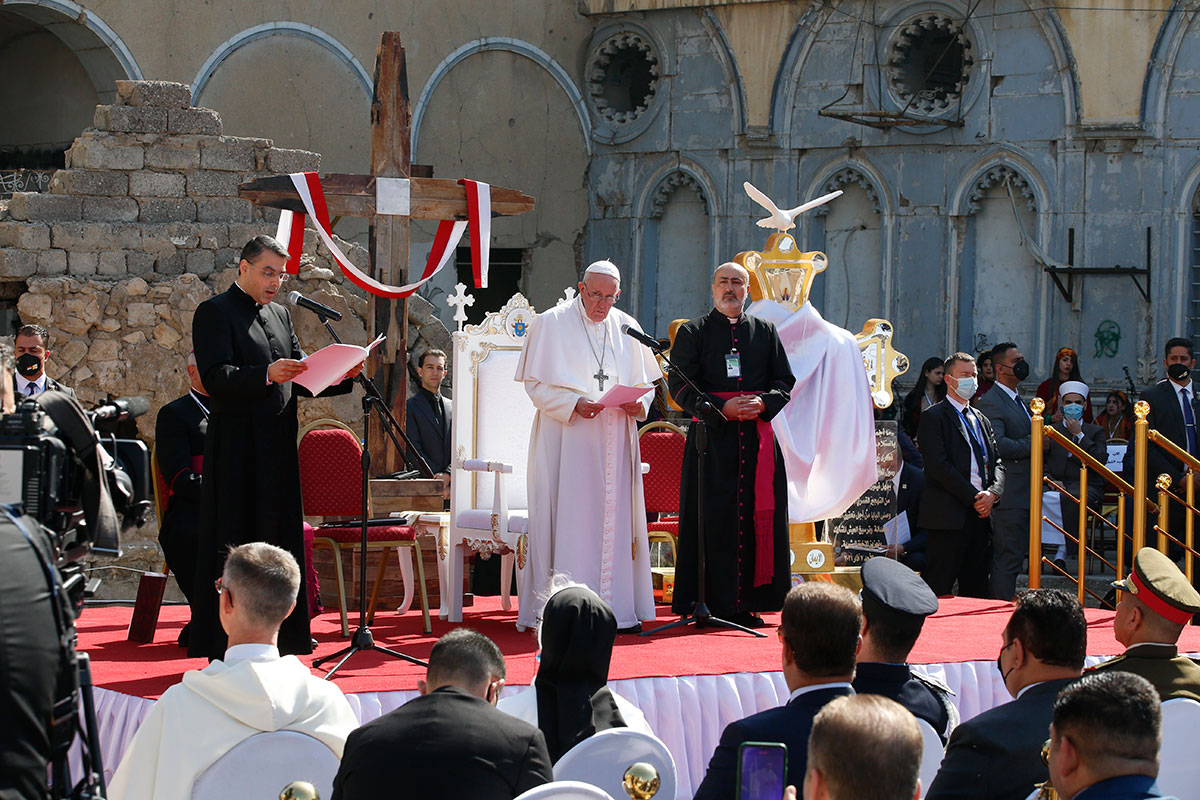 Pope Francis participates in a memorial prayer for the victims of the war at Hosh al-Bieaa (church square) in Mosul, Iraq, March 7, 2021. (CNS photo/Paul Haring)

Bells pealed to welcome the pope to the Syriac Catholic Church of the Immaculate Conception, desecrated during its use as a base by Islamic State fighters, who turned the courtyard into a shooting range.

While much of the city still needs to be rebuilt, Pope Francis said the presence of the jubilant crowds inside and outside the church “shows that terrorism and death never have the last word.”

“The last word belongs to God and to his son, the conqueror of sin and death,” the pope said. “Even amid the ravages of terrorism and war, we can see, with the eyes of faith, the triumph of life over death.”

With Muslim and Yazidi guests joining Catholics in the church, Pope Francis told the people that “this is the time to restore not just buildings but also the bonds of community that unite communities and families, the young and the old together.”

And he thanked the international organisations, particularly the Catholic organisations, that are helping fund the reconstruction of homes, schools, churches and community halls in the city.

And, on the eve of International Women’s Day, Pope Francis paid special tribute to Mary – a photo of decapitated statue of her from Qaraqosh made the news around the world – and to “all the mothers and women of this country, women of courage who continue to give life in spite of wrongs and hurts.”