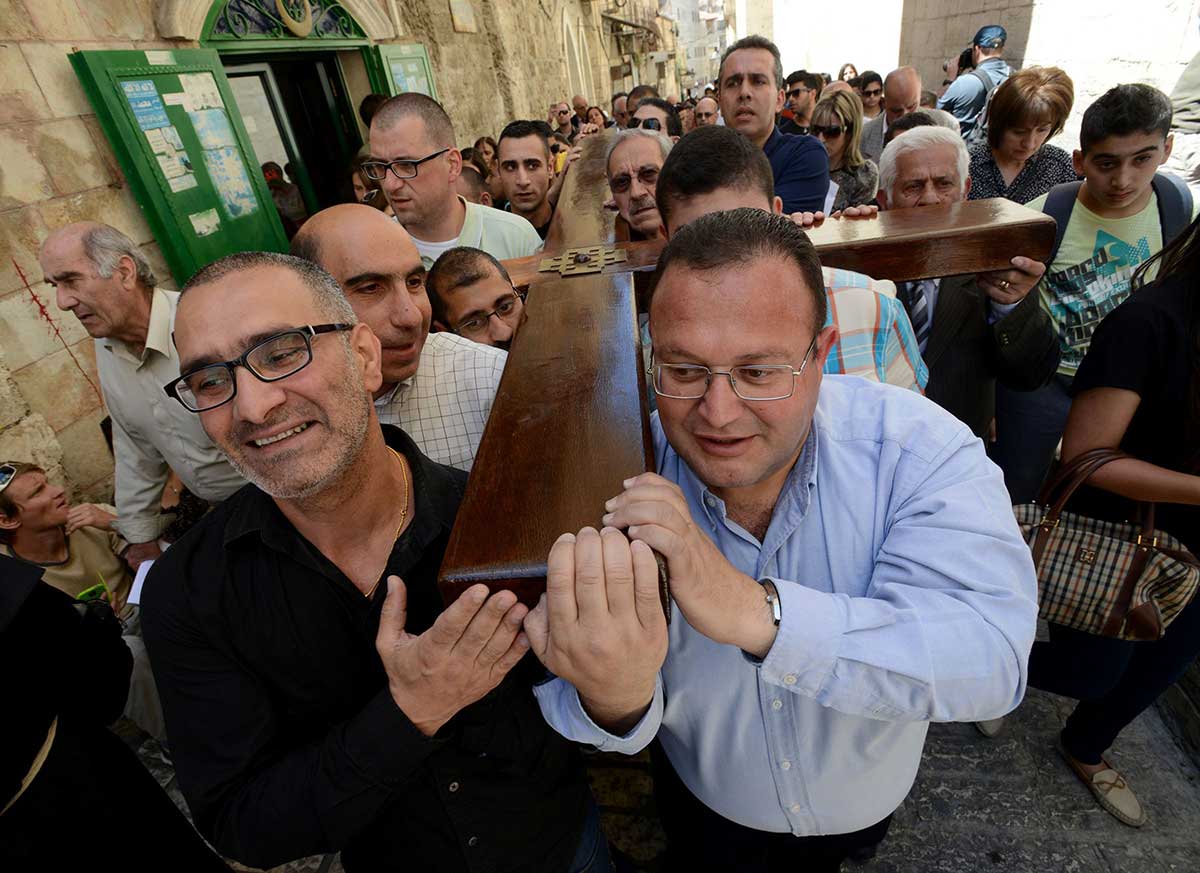 Men are pictured in a file photo carrying a large cross on the Via Dolorosa in the Old City of Jerusalem. The Franciscan Custody of the Holy Land is in charge of most pilgrimage sites, but with no pilgrims and with churches empty for the annual Good Friday collection, officials fear they will not be able to pay teachers, maintain Franciscan sanctuaries or support tuition subsidies. (CNS photo/Debbie Hill)

Christians will struggle to remain in the Holy Land without financial help from Catholics worldwide on Good Friday, a Vatican cardinal has said.

In a letter, Cardinal Leonardo Sandri said that this year’s global collection was critical for Christians struggling to stay afloat following a collapse in pilgrimages caused by the coronavirus pandemic.

“If this small gesture of solidarity and sharing … fails, it will be even more difficult for many of them to resist the temptation to leave their country, more demanding to support the parishes in their pastoral and educational work, and harder to sustain the social commitment to the poor and suffering,” he wrote.

“The sufferings of the many displaced people and refugees who have had to leave because of war call for an outstretched helping hand to pour the balm of consolation on their wounds.

“We must not give up on taking care of the Holy Places that are concrete proof of the mystery of the Incarnation of the Son of God, and the offering of His life for us and for our salvation.”

The letter was dated Good Friday 2021, which falls on April 2, and signed by Sandri and Archbishop Giorgio Demetrio Gallaro, respectively the prefect and secretary of the Vatican Congregation for the Oriental Churches.

The Holy See has overseen the Church’s annual collection for the Holy Land since 1974, when St. Pope Paul VI established Good Friday as the ordinary day for it to be taken up by parishes and bishops around the world.

The collection is traditionally split, with 65% going to the Franciscan Custody of the Holy Land, which has maintained the Holy Places of Christianity in the region for more than 800 years. 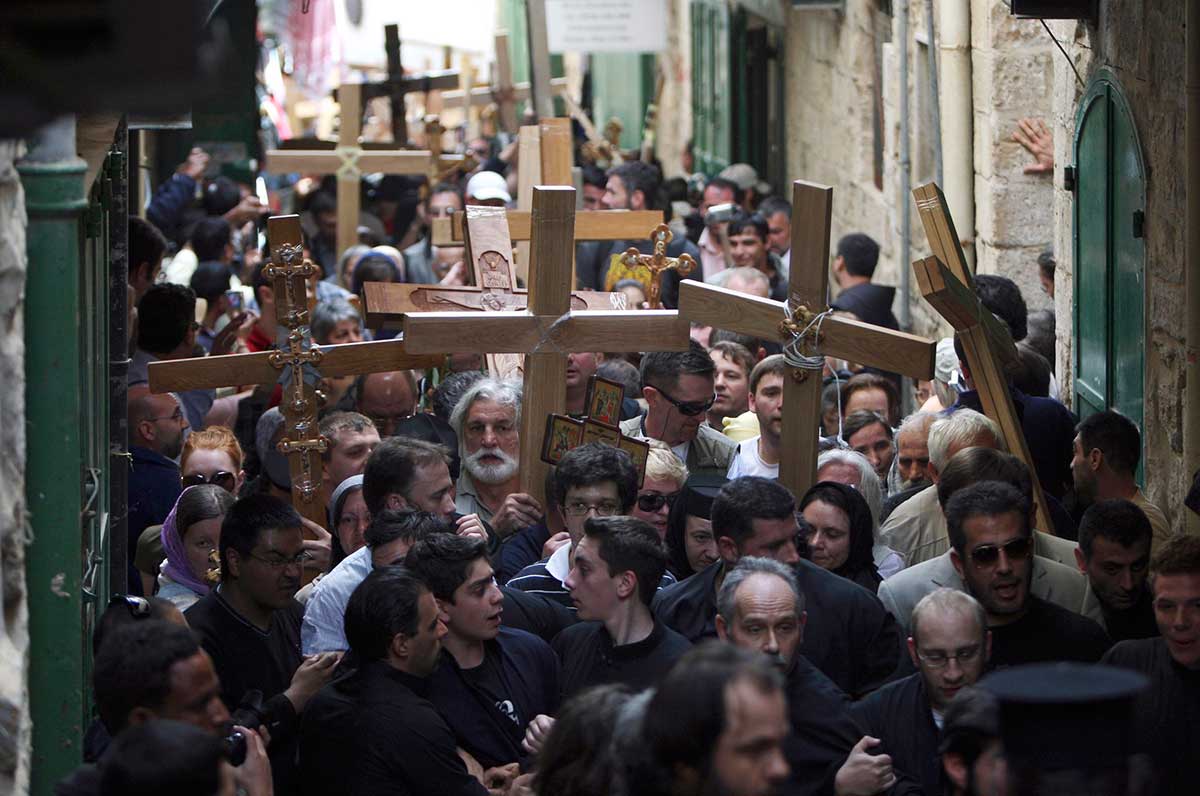 Pilgrims are pictured in a file photo carrying crosses to the Church of the Holy Sepulcher in Jerusalem’s Old City. The Franciscan Custody of the Holy Land is in charge of most pilgrimage sites, but with no pilgrims and with churches empty for the annual Good Friday collection, officials fear they will not be able to pay teachers, maintain Franciscan sanctuaries or support tuition subsidies. (CNS photo/Ammar Awad, Reuters)

The remaining 35% is given to the Congregation for the Eastern Churches to support seminarians and priests, as well as educational and cultural activities.

Alongside the letter, the Vatican issued a detailed breakdown of how the proceeds of the annual collection helped Holy Land Christians in 2019-2020.

The Congregation received $9.7 million from the Holy Land collection in 2020, funding educational institutions such as the Pontifical Oriental Institute and Bethlehem University, which has almost 3,300 students, as well as the schools of the Latin Patriarchate of Jerusalem.

Some $2.4 million went on extraordinary aid to countries such as Syria and Lebanon, while $500,000 financed 303 projects in 24 countries related to the coronavirus crisis.

Sandri described 2020 as “a year of trials” for the Christian minority in the Middle East.

“In 2020, the Christians of those lands suffered an isolation that made them feel even more distant, cut off from vital contact with the brethren from various countries of the world,” he said.

“They suffered the loss of work, due to the absence of pilgrims, and the consequent difficulty in living with dignity and providing for their families and children. In many countries, the persistence of war and sanctions compounded the effects of the pandemic.”

The Holy Land collection was moved in 2020 from Good Friday to September 13, because of the suspension of public Masses in many places due to COVID-19.

The cardinal explained that last year’s collection “fell short, due to the added difficulties involved in carrying it out in many countries.”

In a report on its activities in 2019-2020, the Custody of the Holy Land noted the strain on its finances.

It said: “At this point in time we have been without pilgrims from the end of February 2020. This means grave economic difficulties for the local Christian communities, for the families of our Christian faithful, and also for the Custody itself.”

It added that the collection’s postponement meant that it was still “quantifying the result” and did not know when the resources would be available.

Using the collection’s official Latin title, Sandri wrote: “May this year collection pro Terra Sancta be an opportunity for everyone not to ignore the difficult situation of our brothers and sisters of the Holy Places but rather to lighten their burdens.”

Support for the Journeys of Loss We Have to Take