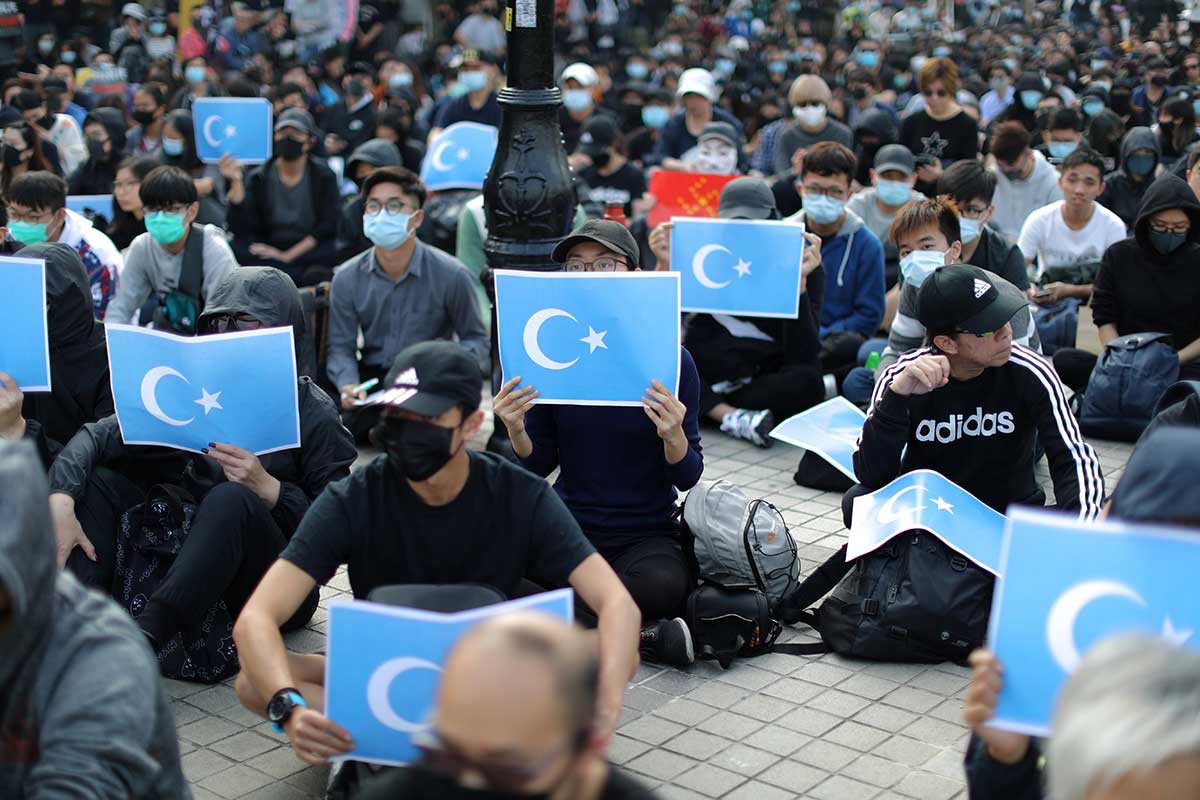 Hong Kong protesters hold East Turkestan Uyghur flags at a rally in support of Xinjiang Uyghurs’ human rights, in Hong Kong on December 22, 2019. The religious persecution exercised by China and North Korea, restrictions on religious freedom in dozens of countries and the continuing threat of violence at the hands of religious fundamentalists belonging to a variety of faiths all have worsened since 2018, said Aid to the Church in Need, a papal foundation and Catholic charity. (CNS photo/Lucy Nicholson, Reuters)

By Cindy Wooden – The religious persecution exercised by China and North Korea, restrictions on religious freedom in dozens of countries and the continuing threat of violence at the hands of religious fundamentalists belonging to a variety of faiths all have worsened since 2018, said Aid to the Church in Need, a papal foundation and Catholic charity.

The problems “have been exacerbated by the COVID-19 pandemic. States have used the insecurity to increase control over their citizens, and nonstate actors have taken advantage of the confusion to recruit, expand and provoke wider humanitarian crises,” said an analysis published with ACN’s annual report, “Religious Freedom in the World.”

The report, released April 20, said outright persecution exists in “26 countries which are home to 3.9 billion people or just over half – 51% – of the world’s population.” In addition to China, North Korea and Saudi Arabia, the list includes a dozen African countries, such as Somalia, Libya, Nigeria, Congo and Mozambique, as well as Myanmar because of its treatment of the Rohingya, a Muslim minority in the predominantly Buddhist nation.

While the charity found the overall situation worsening globally, it did find a glimmer of hope, saying that from 2018 to 2020 there had been “significant progress, especially in interreligious dialogue, as well as the increasingly important role of religious leaders in the mediation and resolution of hostilities and war.”

The report praised Pope Francis and Sheikh Ahmad el-Tayeb, grand imam of al-Azhar University in Cairo, an authority among Sunni Muslims, for their 2019 document on human fraternity and their efforts to promote dialogue, tolerance and mutual respect. And, in fact, the report found an improving, although still concerning, religious liberty situation in Egypt.

The report raised alarms about the addition of religion as a factor in increased violence in several sub-Saharan African countries where “populations have historically been divided between farmers and nomadic cattle herders, occasionally experiencing outbreaks of violence resulting from long-simmering ethnic and resource-based conflicts – more recently exacerbated by climate change, growing poverty and attacks by armed criminal gangs.”

Sporadic violence, poverty, corruption and poor educational and work opportunities, it said, have “provided fuel for the rise of armed groups including Islamist militants, both local, and more recently foreign – transnational jihadist groups engaged in a targeted, systematic persecution of all those, Muslims and Christians alike, who do not accept the extreme Islamist ideology.”

Obviously, the lockdowns and restrictions on public gatherings enacted by national, state or local governments also had an impact on citizens’ freedom to worship.

“It is difficult to assess to what extent the right to religious freedom was threatened universally because each country, and in some cases each region, responded differently to the global event,” the report noted. And while governments were obliged to act to protect the common good, “it is also clear that there were cases of abuse and attacks on religious freedom, in part by means of disproportionate application of restrictions to religious activities, as compared with commercial activities, but also through aggressive police and military tactics in addressing breaches of restrictions related to religious practices.”

As an example, the report cited “examples of disproportionate restrictions on religious practice” in some U.S. states and in Spain “where attendance at religious services was very restricted while places of business or recreation were allowed to welcome customers in greater numbers.”

“The COVID-19 pandemic opened an important debate around the world about fundamental rights, including the right to religious freedom, the implications of legislative overreach and whether, in some cases, aggressively secular governments are adequately able to discern the importance of these rights,” the report said.

As for China, the charity said state control of anyone identifying with a religion has become “relentless.”

Caring for Seafarers in Corona Times