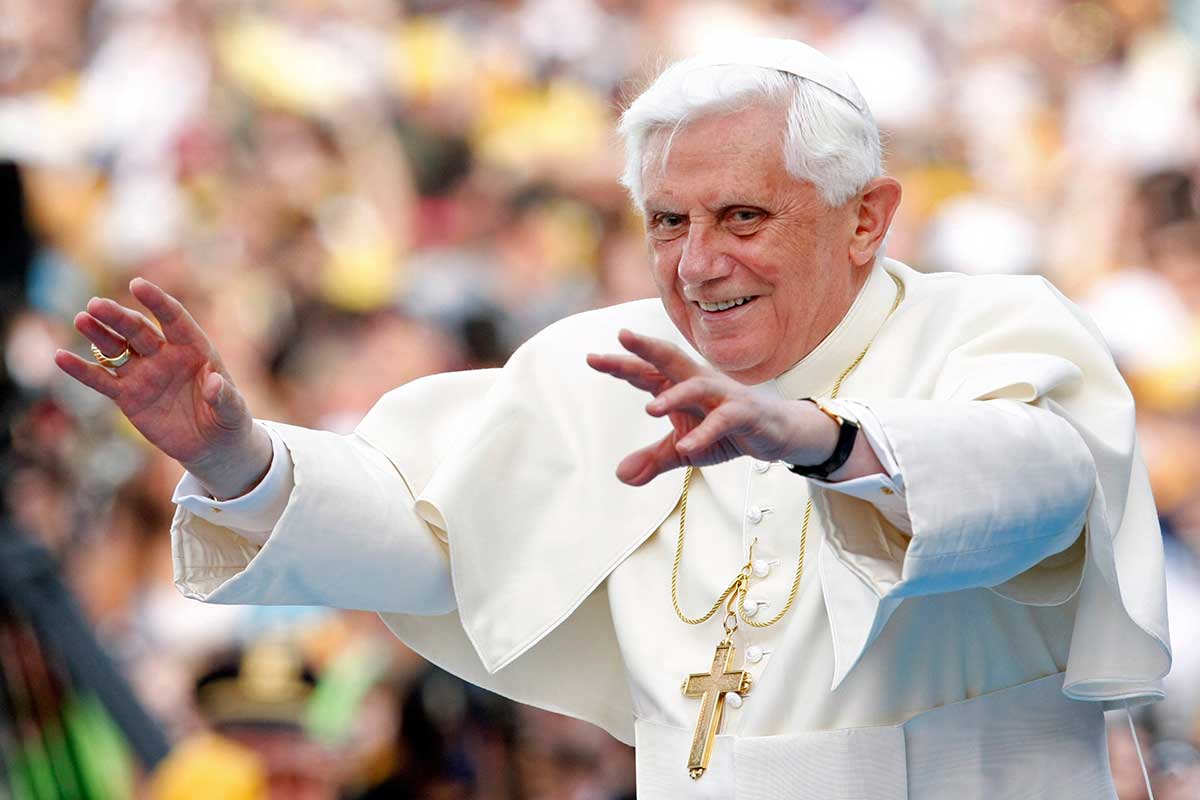 Pope Benedict XVI is pictured in a 2008 file photo. He wrote in the encyclical “Caritas in Veritate”: “Charity goes beyond justice, because to love is to give, to offer what is ‘mine’ to the other; but it never lacks justice.” (CNS photo/Gregory A. Shemitz)

Pope Emeritus Benedict XVI was born 94 years ago on April 16  in the town of Marktl, Bavaria. More than eight years after he announced his retirement from the papacy in 2013, Benedict continues to live a retired life in the Mater Ecclesiae monastery on Vatican grounds.

Despite growing feebleness, the retired pope is in good health, and has marked his April 16 birthday each year, sometimes in the presence of family and friends.

This is Benedict’s first birthday since the death of his older brother Georg Ratzinger on July 1, 2020 in Bavaria.

The pope emeritus was able to say a last goodbye to his brother during a four-day trip to Germany at the end of June.

Benedict’s birthday in 2020 was marked quietly, as Italy was under lockdown because of the coronavirus pandemic. His personal secretary, Archbishop Georg Ganswein, told Vatican News Benedict XVI’s 93rd birthday began with Mass in the monastery chapel, and included prayer and reading.

The pope emeritus also listened to a few traditional songs from his homeland of Bavaria. Since he could not have visitors, Benedict received many emails, letters, and phone calls wishing him a happy birthday.

In 2018, Benedict was treated to a private concert by the Swiss Guard band.

The day after the retired pope’s 90th birthday in 2017, he was thrown a Bavarian-style party, complete with pretzels and German beer.

This party is the origin of iconic photos of Benedict XVI holding a large stein of beer, though the manager of an Austrian restaurant near the Vatican said Benedict usually preferred to drink orange soda, known by the brand name Fanta, on his frequent visits to the eatery as a cardinal.

Benedict XVI resigned from the papacy in 2013, citing advanced age and declining strength that made it difficult to carry out his ministry. He was the first pope to resign in nearly 600 years.

Since his retirement, Benedict’s birthday celebrations have sometimes included visits or messages from Pope Francis.

In 2008, in a speech to the participants in the plenary assembly of the Pontifical Council for the Family, Benedict XVI reflected on the place of grandparents in society and warned that an individualistic mindset is injuring the elderly.

“In the past, grandparents had an important role in the life and growth of the family,” he said. “Even with their advancing age they continued to be present with their children, their grandchildren and even their great-grandchildren, giving a living witness of caring, sacrifice and a daily gift of themselves without reserve. They were witnesses of a personal and community history that continued to live on in their memories and in their wisdom.”

Today, he continued, “the elderly, including many grandparents, find themselves in a sort of ‘parking area:’ some realize they are a burden to their family and prefer to live alone or in retirement homes with all the consequences that such decisions entail.”

“Unfortunately, it seems that the ‘culture of death’ is advancing on many fronts and is also threatening the season of old-age,” Benedict said. “With growing insistence, people are even proposing euthanasia as a solution for resolving certain difficult situations.”

The pope encouraged Catholics to join together to defeat “all forms of marginalization, for it is not only they — grandfathers, grandmothers, senior citizens — who are being injured by the individualistic mindset, but everyone.”

“If grandparents, as is said often and on many sides, are a precious resource, it is necessary to put into practice coherent choices that allow them to be better valued,” he said.