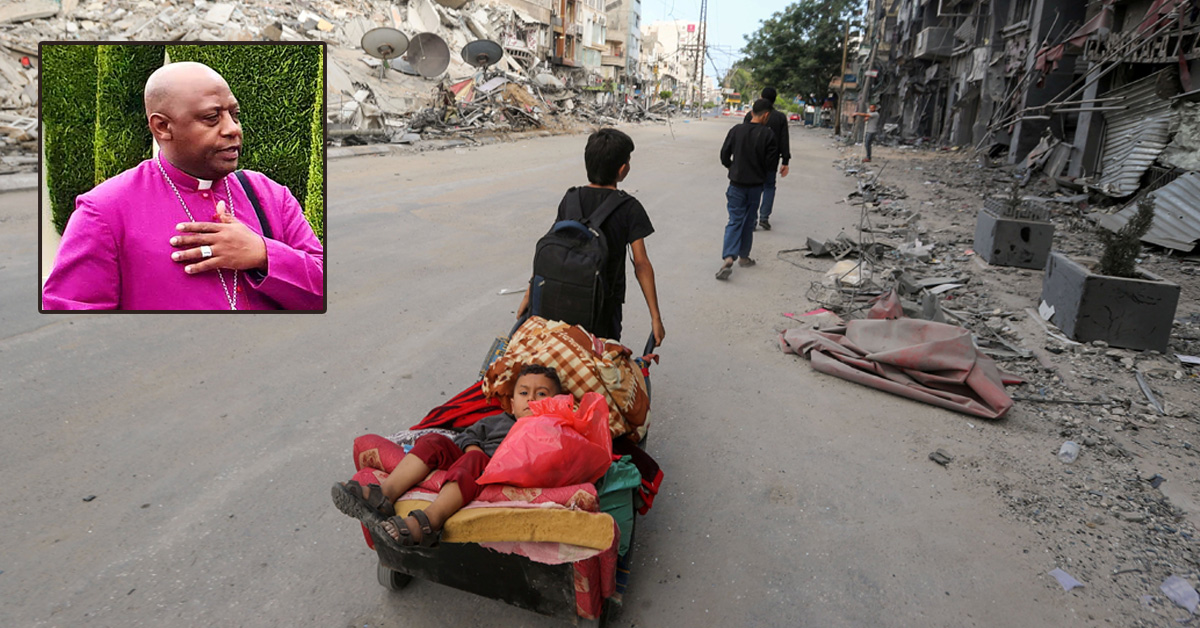 A Palestinian boy pulls a cart carrying his brother and their belongings on May 14, 2021, as they flee their home during Israeli air and artillery strikes in Gaza City. (CNS photo/Mohammed Salem, Reuters). Inset: Bishop Victor Phalana, head of J&P Commission

The head of the bishops’ Justice & Peace Commission has called for an end of Israel’s annexation of Palestinian lands and for prayers that there may be peace in the Holy Land.

In a statement, Bishop Victor Phalana of Klerksdorp said that as “disciples of Jesus Christ, who is the Prince of Peace, we cannot remain silent on the escalation of Israeli-Palestinian conflict, with the subsequent injuries and loss of life”.

“We are aware that the recent crisis has been fuelled by a complexity of factors, both historic and more recent, themselves linked to conflict over the statehoods and nationhood of Israelis and Palestinians. However, at the fundamental level, decades of occupation of Palestinian territories remain at the heart of the issue,” said Bishop Phalana, citing a May 11 statement by the Middle East Council of Churches.

The statement comes amid several flashpoints: Israel’s bombardment of civilian targets in Gaza which has killed almost 200 people (including at least 60 children) and displaced 10,000; rockets fired into Israel by radical Palestinian group Hamas which have injured a small number of people; Israel’s annexation of a Palestinian neighbourhood in Jerusalem and land in the West Bank for Israeli settlements; continuing human rights abuses in the occupied West Bank; and interference with the freedom to pray at the al-Aqsa mosque during Eid.

“While understanding the decades of pain and suffering among Palestinians, we still pray and encourage dialogue as a path to peace. Disproportionate response to violence will not bring about sustainable solution to the current impasse. Joining Pope Francis, we invite all people of goodwill to pray for Israel and Palestine,” Bishop Phalana said, so that the Holy Land may be, as Pope Francis said on May 9, “a place of encounter and not of violent clashes, a place of prayer and peace”.

“We call on Israel to end its occupation and reconsider its decision to annex parts of West Bank and the Jordan Valley which virtually obliterates a future of two states living side by side in peace and security,” Bishop Phalana said.

“The planned evictions of Palestinian families from the Sheikh Jarrah neighbourhood of East Jerusalem must cease,” he added.

“Our prayer is that, in Israel and Palestine, the spirit of the Lord will turn the hearts of stone into hearts of flesh so that there is a celebration of just peace in the Holy Land.”

A New Leader for a Diocese of Few Bishops

Bishop Kevin Dowling: We Can Become A Different Kind of Church