Pope on Pentecost: Say ‘yes’ to the Holy Spirit, ‘no’ to divisive ideologies 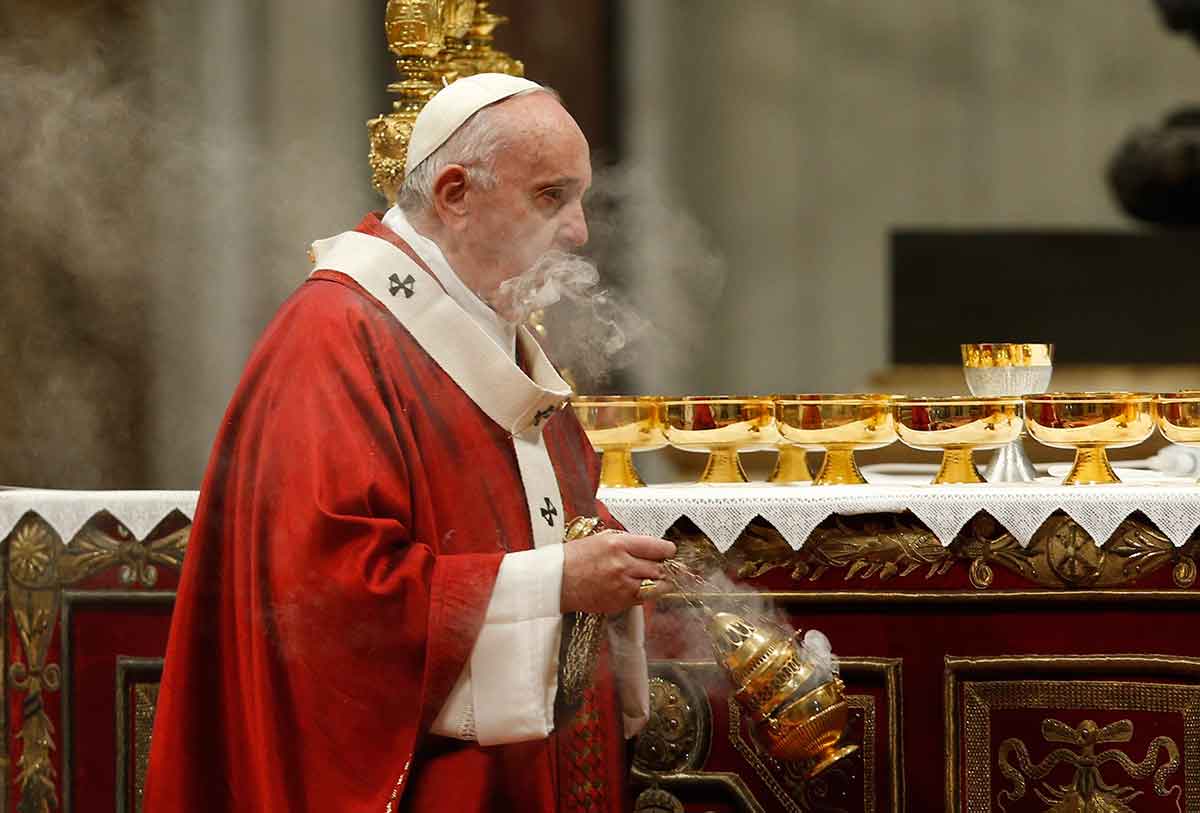 Pope Francis burns incense as he celebrates Pentecost Mass in St. Peter’s Basilica at the Vatican May 23, 2021. (CNS photo/Paul Haring)

By Junno Arocho Esteves – The Holy Spirit’s gift of comfort and solace is meant to unite all men and women and not take sides with any ideology, Pope Francis said on Pentecost.

Celebrating Mass May 23 at the main altar in St Peter’s Basilica, the pope said those who listen to the Holy Spirit are not “concerned with conservatives and progressives, traditionalists and innovators, right and left.”

If adherence to an ideology becomes “our criteria, then the church has forgotten the Spirit,” he added.

The Holy Spirit “impels us to unity, to harmony, to the harmony of diversity. He makes us see ourselves as parts of the same body, brothers and sisters of one another,” the pope said. “Let us look to the whole! The enemy wants diversity to become opposition and so he makes them become ideologies. Say no to ideologies, yes to the whole.”

With pandemic restrictions slowly easing in Rome and across Italy, the Sunday Mass was celebrated in St. Peter’s Basilica with an estimated 1,000 people, wearing masks and socially distanced.

Reflecting on the feast of Pentecost, the pope said the use of the word “Paraclete” is not only meant to describe the Holy Spirit as an “advocate” but also as a “comforter,” especially in “times of difficulty like those we are presently experiencing due to the pandemic.”

The comforts of the world, he explained, are like a pain reliever that offers only temporary relief but does not “cure the illness we carry deep within.”

“Only someone who makes us feel loved for who we are can give peace to our hearts. The Holy Spirit, the love of God, does precisely that,” the pope said. “He is the very love of God, who does not abandon us, for being present to those who are alone is itself a source of comfort.”

In turn, Christians are called to “embody the comfort he brings” and to be near to others “not with trite words, but with prayer and closeness,” he said.

The Holy Spirit, he added, is telling the church that today is a “time for comforting” and more joyfully proclaiming the Gospel rather than “combatting paganism” or “lamenting the drama of secularisation.”

Continuing his homily, Pope Francis said that while the spirit of the Evil One deceives all to “yield to the allure and promptings of vice,” the Holy Spirit is “the spirit of truth” that brings “thoughts and feelings” without forcing or imposing.

The Holy Spirit affirms to Christians “the primacy of today,” which means living “in the present” and not being “paralysed by rancour or memories of the past” nor fearful of the future, the pope said.

In affirming the “primacy of the whole,” he continued, the Holy Spirit does not “mould isolated individuals” but rather “shapes us into a church in the wide variety of our charisms, into a unity that is never uniformity.”

The apostles, the pope explained, were people who had “contrary political ideas, different visions of the world” and who, upon receiving the Spirit, “learned to give primacy not to their human viewpoints but to the ‘whole’ that is God’s plan.”

Lastly, the Holy Spirit affirms “the primacy of grace” and calls on all Christians to “put God before yourself,” the pope said.

If the church only concerns itself with “our own projects, our structures, our plans for reform” then it will “bear no fruit,” Pope Francis said.