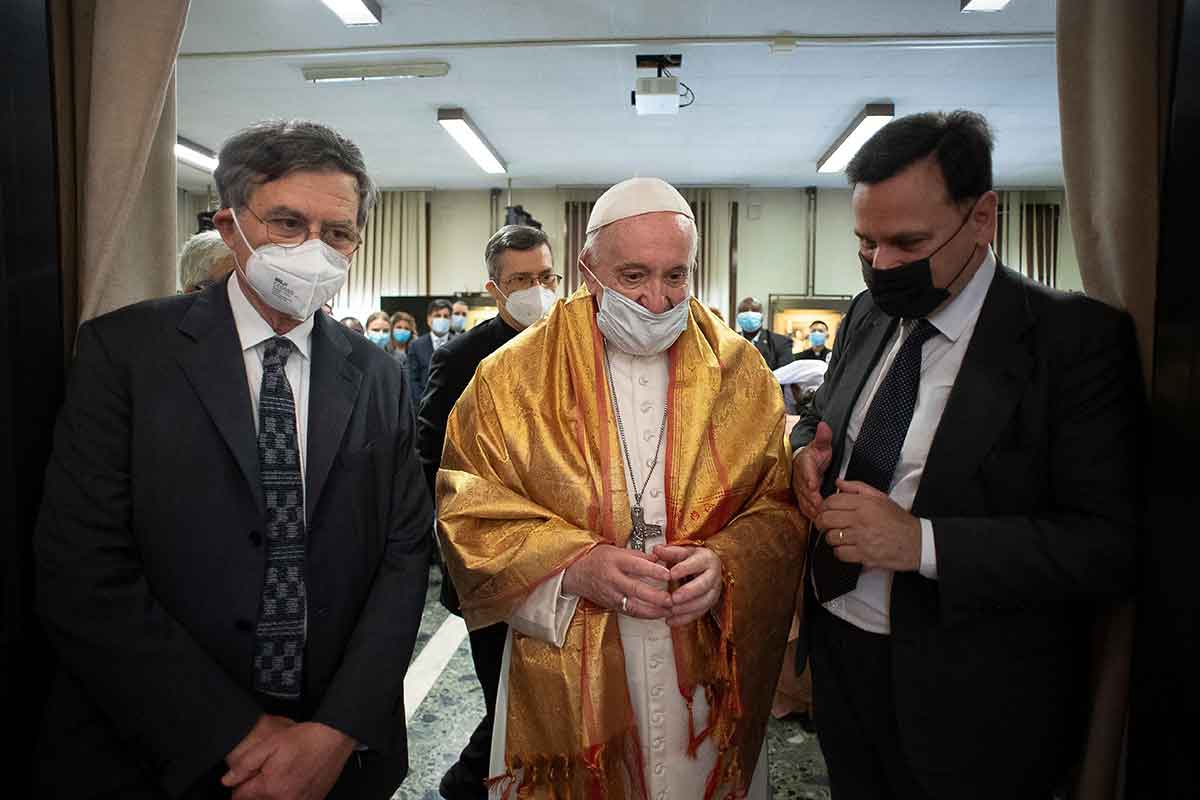 He also said employees of its two outlets, Vatican Radio and L’Osservatore Romano newspaper, should be asking themselves every day how many people are they really reaching “because there is the danger – for all organisations – the danger of a lovely organisation, a lovely job, but it does not get to where it has to go.”

At the start of the Pentecost season, the pope visited May 24 the headquarters of the Vatican Dicastery for Communication, whose different entities supply images, news and features in almost 50 languages for radio, video, print and internet. The dicastery coordinates the efforts of the Vatican publishing house, the Vatican press office, the Vatican’s video, television and photography services, Vatican Radio – which was celebrating its 90th anniversary – and L’Osservatore Romano, which was celebrating its 160th anniversary.

After visiting managers and staff in the building, the pope delivered impromptu remarks in the ground floor conference room, thanking employees for their work, and noting how the different entities were all together and well-organised.

“The problem is (making sure) that this system that is so big and complicated works,” he said.

A problem he noted in Argentina, he told them, is when someone got an important new position at a company, the first thing they would do was order elegant new furnishings at an upscale office supply store without having even looked at what the office already had because it had to be “all new, all perfect, beautiful.”

But the person would not ensure that the actual enterprise would work, he said, adding that “it is important that all this beauty, all this organisation work (and) to work is to go, to walk” or journey.

Another example of organisational “functionalism” getting in the way, he said, is having too many “undersecretaries” or administrators serving under a director. Whenever someone needs something to get done, “they go to the undersecretary who has to fix it and who says, ‘Wait a second, I’ll get back to you,’ and they have to call the director … namely, it doesn’t work.”

It ends up being a system where the person cannot decide or have his or her own say, making it “lethal” for the organisation by putting it “to sleep and killing it,” he said.

He asked the dicastery’s management and staff to be careful and make sure that the organisation is working by helping foster creativity.

“Your work should be creative, always, and go above and beyond” the usual, he said. If everything is “too well ordered, in the end, it ends up being caged and not helping.”

To make sure an organization is really working, “it is necessary to make sure everyone has enough freedom to work, that they have the ability to take risks and not go and ask permission, always permission … this is paralysing,” he said.

The pope also sat in a studio with two Vatican Radio journalists to offer a brief reflection live to listeners.

Massimiliano Menichetti, editor-in-chief of Vatican Radio and Vatican News, explained that offering programs in multiple languages via traditional broadcast radio, satellite radio, Internet and short wave was part of fulfilling the pope’s mission to “go to the peripheries where no other means (of communication) arrives.”

“We try to never leave anyone all alone, even during this time of a pandemic,” he said.

Pope Francis responded by thanking staff for their work, but he said there were many reasons to be worried about the radio and the newspaper and that there was one thing he was most concerned about: “How many people listen to the radio and how many read L’Osservatore Romano?” he said.

“Because our job is to reach the people, that the work that is done here – which is beautiful, it is great, it is tiring – get to the people,” he said, recognizing their service in multiple languages and shortwave transmissions.

“But the question that you must ask is: how many? It gets to how many people?” he said.

The danger all organizations face, he said, is ensuring they accomplish what they set out to do.

Pope Francis said it reminded him of the fable of the mountain groaning in labour only to give birth to a tiny mouse. The classic fable by Aesop is often interpreted as a warning against believing in big or boastful talk because some promise more than they can deliver.

According to the Vatican press office, there were 250 million page-views on Vatican News in 2020, with an average of 21 million page views a month, peaking at 46 million during the first COVID-19 lockdown in early spring.

More than 1,000 radio stations around the world are partnered with Vatican Radio to rebroadcast its transmissions and about 21,500 people read the Vatican newspaper – either online or in print – each day, and there are about 40,000 subscribers to its print editions published in Italian and other languages, the press office said.