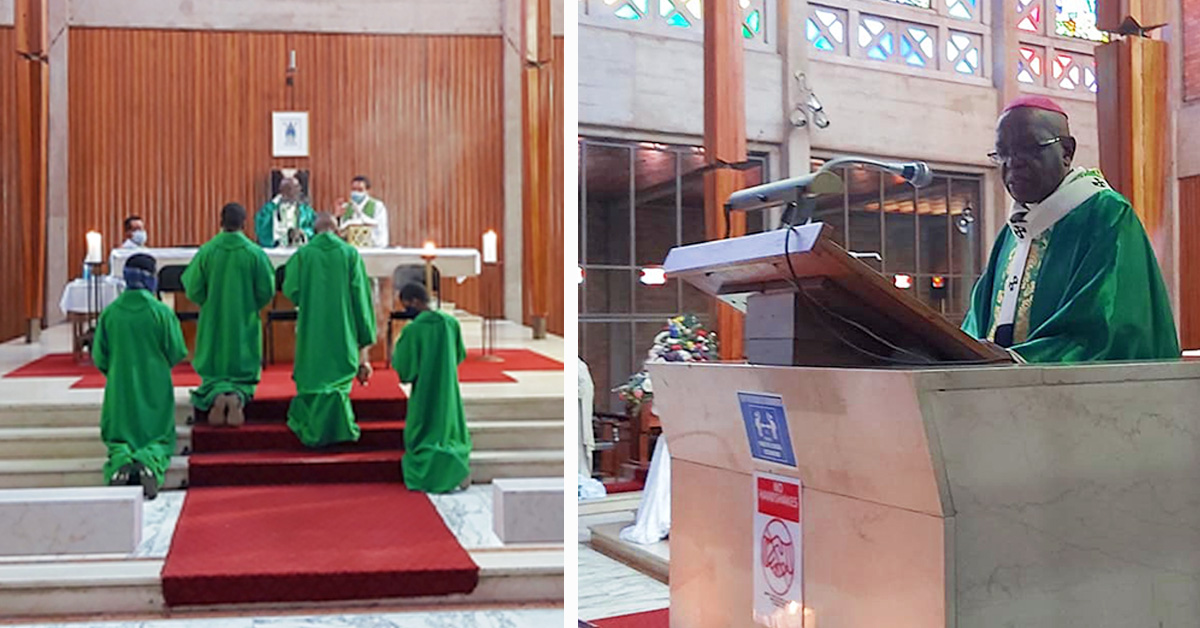 The Migrants and Refugees Office of the Southern African Catholic Bishops Conference (SACBC) in partnership with the United Nations High Commission for Refugees (UNHCR), celebrated World Refugee Day on Sunday June 20, with a special Mass at the Cathedral of Christ the King in Johannesburg.

By Sheila Pires – Themed ‘The Power of Inclusion’, this year’s World Refugee Day celebration aimed at encouraging host countries to welcome and integrate refugees into communities.

The Liaison Bishop of the SACBC Migrants and Refugee Office who is also a member of the UNHCR Multi-Religious Council of Leaders and high profile supporter of the #IBelong campaign Archbishop Buti Tlhagale OMI, was the main celebrant. In his homily, Archbishop Tlhagale encouraged the integration and inclusion of refugees in society “Members of the host country, in this case, South Africans, on this Refugees Day, should humbly recall that all human beings have been made in the image of God and that we are our brother’s and sister’s keeper.

This imposes a biblical and moral obligation on us all to be inclusive in our relationships with each other especially concerning refugees.” He also stressed the promotion of “an inclusive mindset” amongst South Africans “Members of the host country,  on this Refugees Day, should humbly recall, that all human beings have been made in the image of God and that we are our brother’s and sister’s keeper.

This imposes a biblical and moral obligation on us all to be inclusive in our relationships with each other especially concerning refugees.” In his concluding remarks, Archbishop Tlhagale asked host countries to allow families to join their refugee member “Refugees have families too. Host countries should not make it difficult for families to join their refugee member who are already burdened with the challenges of migration. For many refugees, the biblical word of Ruth captures their own sentiments.” Said Archbishop Tlhagale OMI.

According to UNHCR nearly 80 million people worldwide have been forced to flee their homes – having sought shelter across borders or within their own country. Among them are millions of refugees, more than half of them under the age of 18. As countries worldwide implemented strict lockdown measures to control the spread of the novel corona virus, many refugees were faced discrimination and exclusion, with the closure of borders in most countries, and limited assistance preferably to citizens.

Addressing participants at the World Refugee Day Mass, Mr Valentin Tapsoba – the Director of the United Nations High Commissioner for Refugees (UNHCR) Regional Bureau for Southern Africa highlighted the plight and difficulties refugees face, as well as how the UNHCR is working towards helping alleviate problems faced by refugees. He urged host countries to embrace refugees with open arms, and encouraged world leaders to promote peace and stability.

Dr Emmanuel Taban, originally from South Sudan and now a leading pulmonologist was part of the celebration and gave a powerful and inspiring testimony of his journey from being a refugee to one of the 100 most influential Africans in 2020. Dr Taban encouraged fellow refugees to integrate into the societies of the host country, to learn the language and to contribute towards the development of the host country.

With South Africa experiencing a third wave of Covid-19 cases, only fifty people were allowed to attend the celebration at the Cathedral of Christ the king. However, most guests opted to attend the celebration virtually. The Seraphim Choir –the official choir of the Johannesburg Archdiocese Pastoral Care centre -sang in different African languages to highlight the theme ‘The Power of Inclusion’.

The SACBC through Caritas and the Migrants and Refugees Office has previously patterned with the UNHCR in raising awareness about the plight of refugees in Southern Africa.