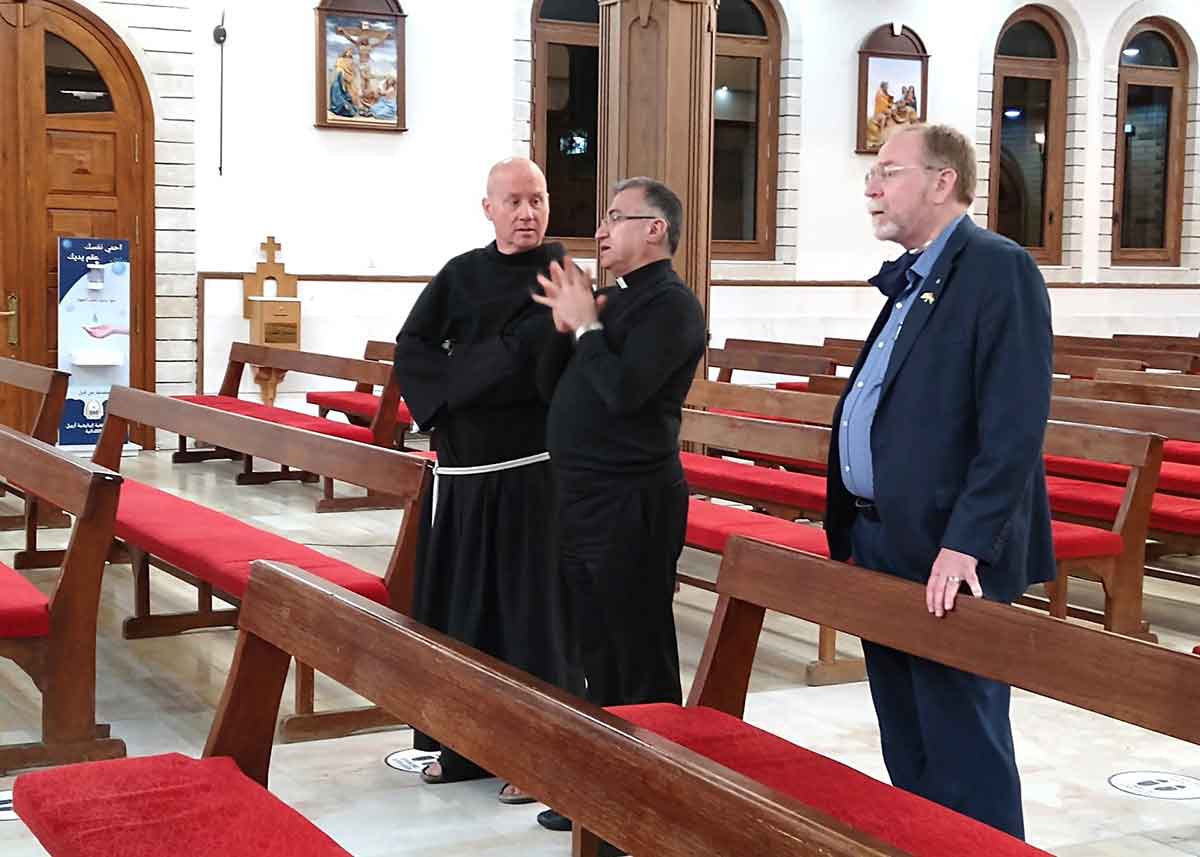 Franciscan Father Dave Pivonka, president of Franciscan University of Steubenville, Ohio, listens to Chaldean Catholic Archbishop Bashar Warda of Irbil, Iraq, during a trip by university officials to Iraq while Pope Francis made his pastoral visit to the country March 5-8, 2021. At the International Religious Freedom Summit in Washington, Archbishop Warda said in a July 14 address that beyond Iraq’s infrastructure needs, what needs to be rebuilt is the dignity of those who suffered under the Islamic State group. (CNS photo/courtesy Franciscan University of Steubenville)

By Mark Pattison – When fighters from the Islamic State group overran huge swaths of Iraq seven years ago, they laid waste to an untold number of buildings and religious sites.

Those need to be built again, acknowledged Chaldean Archbishop Bashar Warda of Irbil, in the Kurdistan region of Iraq. But beyond infrastructure needs, what needs to be rebuilt is the dignity of those who suffered under IS.

“Sustained persecution against a group, if not stopped, eventually takes from them their physical properties, their livelihoods, their security, and in the end, their dignity as human beings,” Archbishop Warda said in his July 14 address at the International Religious Freedom Summit in Washington.

“Once this dignity is destroyed, the family and all social stability is destroyed with it. And while buildings can be quickly rebuilt, the restoring of dignity to those who have been brutally marginalised and humiliated as human beings is a far more difficult journey – a journey which for which the hidden costs are far greater than that of any physical reconstruction,” he said.

“And this restoration of dignity requires of international interveners and providers of aid something beyond the mere metrics of dollars spent and projects completed,” Archbishop Warda added.

“It requires an honest and sincere treatment of affected people with a simple thing – that is respect for them as human beings. As His Holiness Pope Francis has said before to the international aid community, ‘People before projects.'”

That’s not to say that everything destroyed during the blindingly fast takeover of Iraqi territory by IS in 2014 has been rebuilt or patched up. Unlike the debate in the U.S. Congress over American infrastructure needs, there’s no disputing that Iraq needs a thorough rebuild.

Under IS occupation, “fathers were made powerless to take care of their families. Turned overnight into helpless beggars, the years for most of them have stretched on without opportunity to provide for their families and secure a meaningful future for their children,” Archbishop Warda said in his talk, “The Social Impact of Persecution and Religious Discrimination.”

“Efforts to build businesses are still stolen from them by their persecutors – who continue to exist in Iraq but now in different clothing – as soon as they begin to grow,” the archbishop said.

“Aid programmes, which are designed to achieve social, financial and political objectives designed in the West,” he explained, “direct innocent and powerless recipients concerning (the) ways in which they must now behave in order to be helped out of their misery.”

“In other words, as a condition of receiving charity, the persecuted innocents must now allow themselves to be further judged and accept the fact without protest when they are found wanting,” Archbishop Warda added. “Indignity upon indignity then, and where does this lead?”

His answer: “Unrest, breakdown of the family, the despair of dependency, and finally exodus.”

The archbishop told CNS that while his archdiocese has been growing since 2003, “we have 2,600 families from Mosul that have not returned to Mosul. They still find it not stable, not safe, they don’t have any property even when they lived here. Jobs have disappeared. That goes to the insecurity that is there.”

Over 40 organisations joined in convening the International Religious Freedom Summit, held in person in the nation’s capital and online July 13-15. It featured prominent religious leaders and religious freedom advocates in a series of speeches, discussions and programs focusing on the vital need to protect religious freedom globally.

The U.S. Conference of Catholic Bishops’ Committee on International Justice and Peace was among the summit’s sponsors.

Cardinal Timothy M. Dolan of New York, chairman of the USCCB’s Committee for Religious Liberty, was scheduled to deliver a keynote at the closing dinner July 15.