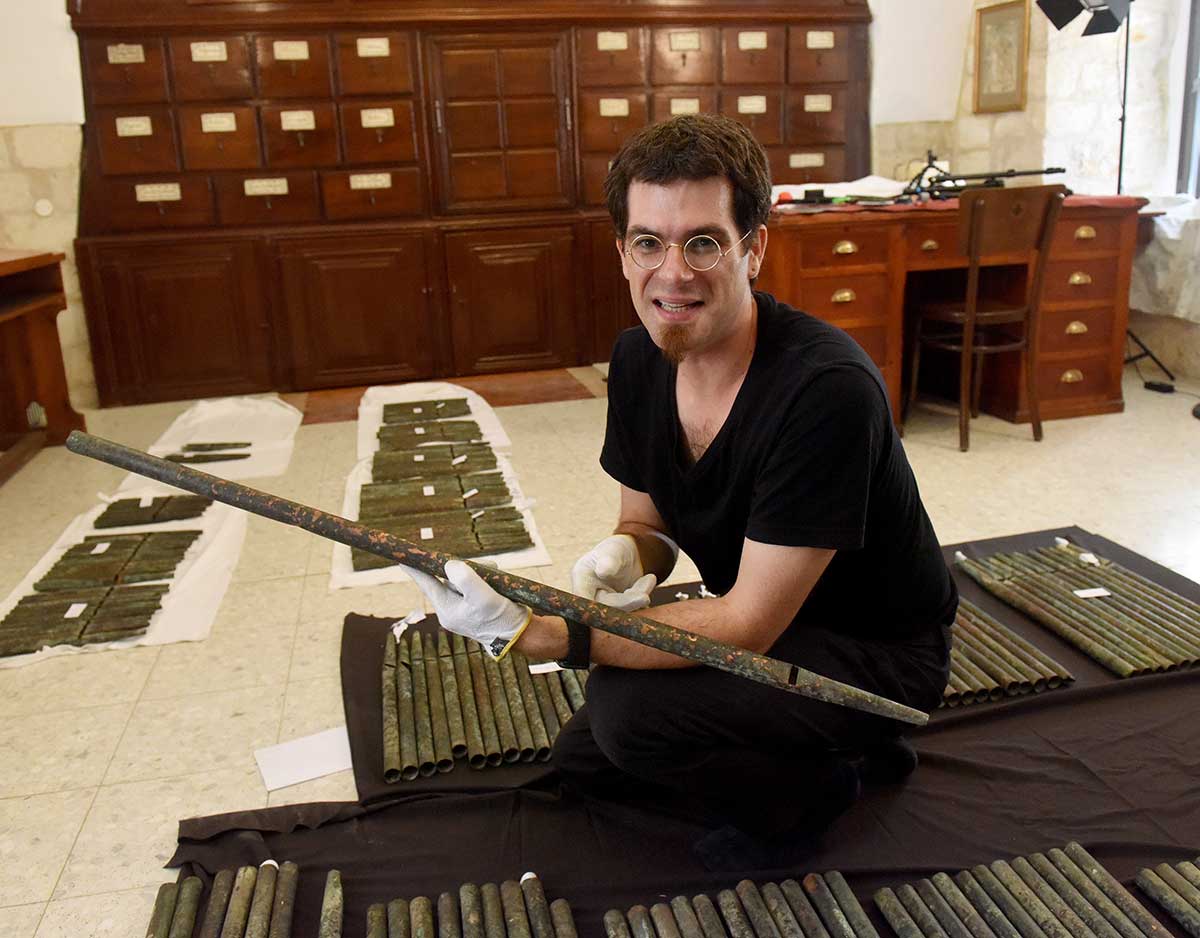 David Catalunya, a musicologist and historian who is a research fellow at the University of Oxford, poses with the preserved 12th-century pipes of an organ at St. Saviour Parish in the Old City of Jerusalem July 21, 2021. He said the pipes, from an organ at the Church of the Nativity in Bethlehem, West Bank, might have survived the 1187 invasion of Saladin, because the fighters might have considered it a piece of furniture. (CNS photo/Debbie Hill)

By Judith Sudilovsky – Frozen in time, like a “musical Pompeii,” the 221 remaining original organ pipes from the Church of the Nativity in Bethlehem may fill a gap of knowledge of more than three centuries in the history of the organ and its cultural context, medieval church culture, music and technology.

“This organ dates from the 12th century and is a unique specimen in the world,” said musicologist and historian David Catalunya, a research fellow at the University of Oxford.

Catalunya was in Jerusalem this summer to conduct a preliminary study on the pipes. The next phases of the research will involve a larger team performing the scientific study of the pipes, including metal analysis, 3D scanning, and a CT scan. One aim of the project is to replicate the original pipes and reconstruct the organ’s missing parts, so that its sound can be heard again after 800 years.

The organ pipes were discovered, along with bells and other liturgical ornaments, in an archaeological excavation at the Franciscan monastery of the Church of the Nativity in 1906 and were brought to Jerusalem under the care of the Franciscan Custody of the Holy Land. The objects were stored for more than a century in the Studium Biblicum Franciscanum and will be displayed at the new Terra Sancta Museum in Jerusalem.

Catalunya said French Crusaders probably brought the organ to the Holy Land in the first half of the 12th century. He believes the organ survived the 1187 invasion of Saladin, sultan of Egypt who defeated the Crusaders. Saladin’s army may have destroyed the church bells, which were seen as a public symbol of Christianity, as opposed to the organ, which may have been perceived by soldiers as “just a piece of furniture.” Catalunya says he believes the organ pipes, bells and other items may have been hidden underground on the eve of the invasion of the Khwarezmian Turks in 1244.

“So these pipes – only just by a fortunate turn of fate – survived, and it is quite a remarkable story,” he said. “I feel extremely fortunate to have the opportunity to conduct this research.”

The organ first appeared as a musical instrument in Hellenistic Greece and was introduced into the Latin Christian church in the 10th century. While a few remains of fragments of water organs survive in Greece and present-day Hungary, Catalunya said no other pipes from a medieval church organ survived until the 15th century. The Bethlehem organ pipes represent a unique opportunity to understand the organ’s early stages of development in Christian culture, as organs underwent major transformations to adapt to new architectural frameworks of the church and the needs of church ritual, Catalunya noted.

“It is so difficult to describe in words what I felt when I saw these organ pipes for the first time. I was so excited, I started by grouping the pipes according to size on the floor … until, little by little, the original structure of the organ emerged,” he said. Then he used the mathematical calculations provided in medieval texts to determine the pitch of each pipe, he said.

“I was able to do so much progress on the first three days of my work, not only because of my skills as a researcher, but mostly because the material speaks for itself, as it is preserved in astonishing condition.”

“Sometimes you have the impression that one could blow air into a pipe and make it sound. These pipes really look like they were made just this day,” he added, pointing out to the tool marks left on the pipes by the organ maker. “But in reality they are from the early 12th century.”