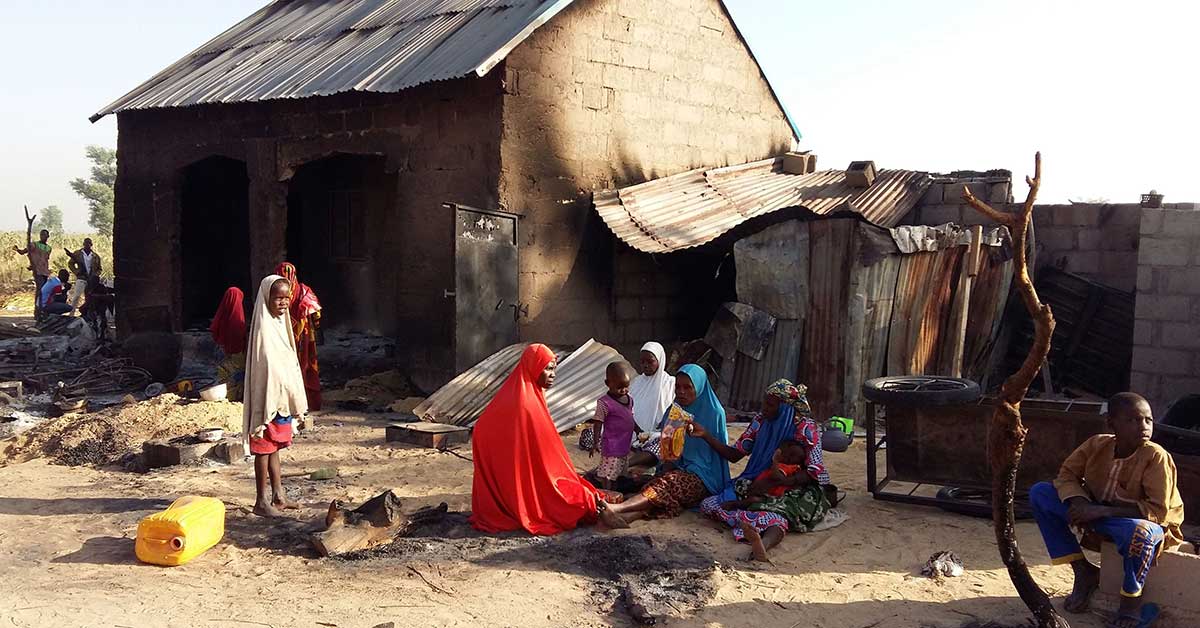 A family is pictured sitting near a damaged home after an attack by suspected members of the Islamist Boko Haram insurgency in Bulabulin, Nigeria, Nov. 1, 2018. After the Nigerian government said Boko Haram extremists were laying down their weapons and asking for forgiveness, a spokesman for the Catholic bishops urged citizens to be cautious in what they believe. (CNS photo/Kolawole Adewale, Reuters)

By Peter Ajayi Dada – As at least 1,000 Boko Haram extremists laid down their weapons and asked for forgiveness, a spokesman for the Catholic bishops urged citizens to be cautious in what they believe.

“It is very difficult for any right-thinking person to believe the government is sincere about this whole development,” Father Mike Umoh, director of communications for the Nigerian bishops’ conference, said August 12.

Brig. Gen. Onyema Nwachukwu released photos Aug. 9 of men holding placards asking for forgiveness and said Boko Haram’s chief bomb expert and his deputy were among those who turned themselves in. He also said hundreds of women and children from the militants’ families also surrendered. Among them were two of the 276 girls kidnapped in 2014 from the Chibok school; that kidnapping led to the #BringBackOurGirls campaign.

Media reported that Nigerian government troops handed out food and clothes to those who surrendered.

But Father Umoh was critical, saying the move showed sympathy to a group “that has claimed thousands of lives of Nigerians and is still claiming many more.”

The U.N. Office for the Coordination of Humanitarian Affairs reports 35,000 people have been killed in Nigeria since 2009, when Boko Haram launched its campaign to overthrow Nigeria’s secular government. Nearly 2 million people remain displaced by the fighting. The group also is active in Nigeria, Chad and Cameroon.

Some analysts says the extremists are surrendering because of a split with the Islamic State West Africa Province insurgents.

Father Umoh asked if so many members of the militant group had repented, who were those still attacking innocent Nigerians and holding many hostage for ransom?

Bishop John Afareha of Warri said the current insecurity and killings throughout Nigeria were nothing but a battle between God and Satan, and he urged Christians to pray. The bishop said almost all the regions in Nigeria seemed to be surrounded by “unknown gunmen” who continued to take innocent lives at will.