With God’s help, couple says, they found each other after being widowed 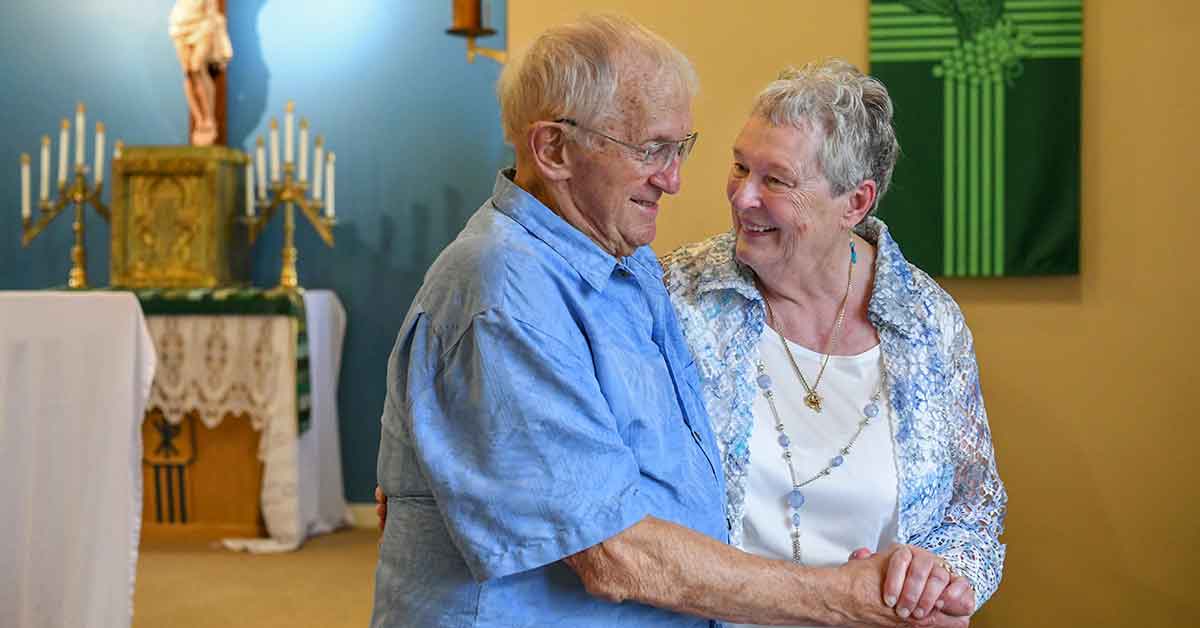 Ray Germain and Joanne McKeon celebrate five years of marriage and renew their vows on July 11, 2021, at St. Joseph’s Catholic Church in Greenfield Center, N.Y. McKeon, 80, and Germain, 85, have been married for a combined total of 100 years. They were widowed when they married five years ago. Germain was married to his first wife, Marcia, for 55 years, while McKeon was married to her first husband, Ward, for 40 years. (CNS photo/Cindy Schultz via The Evangelist)

By Emily Benson – The pews were packed with friends and family at St Joseph Church in upstate New York as Joanne McKeon and Ray Germain stood at the altar on their wedding anniversary, holding hands and smiling at each other, set to renew their wedding vows.

In the background, volunteers could be heard shuffling cups and food trays, preparing for the party in the back of the church for the honoured couple and guests.

It was a special day after all. Not everyone celebrates 100 years of marriage.

McKeon, 80, and Germain, 85, have been married for a combined total of 100 years. Germain was married to his first wife, Marcia, for 55 years, while McKeon was married to her first husband, Ward, for 40 years. The widower and widow married five years ago.

As their anniversary loomed, the couple started poking fun at their upcoming century of marriage. “It started out as a joke,” Germain laughed. The more they thought about it though, the more they wanted to celebrate.

They thought a party for their marriages – and their marriage together – was the perfect reason for friends and family to gather, especially after a year of social restrictions from the coronavirus pandemic.

The couple hosted their celebration on July 11 with Mass celebrated by Father Simon Udemgba, the parish administrator.

“They are a rare couple,” Father Udemgba told The Evangelist, newspaper of the Diocese of Albany.

Originally from Nigeria, Father Udemgba has been close with McKeon for years. After the priest joined the parish in 2011, McKeon cooked meals for him as part of the church’s ministry. She often called Father Udemgba on his days off, offering to drive him to visit local stops. The two would talk or pray the rosary. Now, he just calls McKeon “Mom.”

After hearing about the couple’s party, he insisted on having it at the church so he could preside as they renewed their vows.

Scattered around the couple’s home among many photos from their cruises and parties together are reminders of saints and ecclesiastical items, which is fitting for a couple deeply rooted in their faith. McKeon and Germain have turned to God throughout their lives, both in their previous marriages and during their new journey as a couple.

God “let me know that Ray was the person I was supposed to marry,” McKeon said.

The two first met six years ago at an interfaith ministry meeting at the Dominican Retreat and Conference Center in Niskayuna, New York. McKeon already was a member of the ministry while Germain was coming for the first time.

Funny enough, the two attended the same church at the time, Immaculate Conception in Glenville, New York, but had never met. McKeon was even in the resurrection ministry for the parish and helped organise the funeral for Germain’s wife.

The parish wasn’t the first time the couple had close encounters. Both grew up in Schenectady, New York, near Albany, and attended the same high school. They shared mutual friends, but never crossed paths.

After her husband died in 1998, McKeon never thought she would remarry. “I was a widow for over 20 years,” she said. “I ran a house, balanced a checkbook. I was financially independent. I really never thought I would get married again.”

McKeon went through a difficult period in the late 1990s. Six months after her husband’s death, her father died. Less than a year later, her son, Mark, passed away. “It was a really rough time for me,” she said. “I was in church a lot.”

For years, McKeon had attended St. Joseph Church in Greenfield Centre, but when she moved south in 2005 she joined Immaculate Conception Parish to attend morning Mass. McKeon couldn’t leave her old church behind and visited on the weekends.

One day, her mother-in-law took her aside and encouraged her to get back into dating. “She said you were a wonderful wife, don’t let anything stop you from letting someone into your life again,” McKeon recalled.

“I did see gentlemen throughout the years,” she added, “but then I met (Germain) and things changed a little.”

After their first meeting, McKeon and Germain started to see each other at morning Mass at Immaculate Conception. On Germain’s birthday, McKeon insisted on taking him after Mass to a cafe across the street. Their daily post-Mass coffee or bakery sweet turned into a tradition.

“Then one time he couldn’t come because he had something to do,” McKeon said, “and I missed him.”

On New Year’s Eve 2015, Germain asked McKeon to meet at Immaculate Conception. The two prayed before he took her to the front of the church. “He said, ‘Would you marry me?’?” McKeon smiled. “And I said, ‘Yes.'”

As an older couple married for the second time, some things took some relearning. “My wife and I started (our lives together) when we were 22 or 23, and we grew together,” Germain said. “We had one house, one car, one checking account and we grew together as a couple for 55 years, and Joanne did similar things with Ward.

“The second marriage, though, our opinions were formed already,” he continued. “We had different opinions, and that was great, but from a marriage point of view I think the need is to deal with two people who are very different. It’s not that I’m right and you’re wrong. If there’s a winner and a loser, then it’s really two losers. If we agree great. If we don’t, then we agree to disagree.”

Now, the two are looking forward to their next steps in life: spending time with their family and friends and growing together.

“It’s a very beautiful thing,” said Germain’s daughter Michelle. “We’re very proud of the love that is in the room.”