Amid so much division, the memory of 9/11 can remind us to return to basics 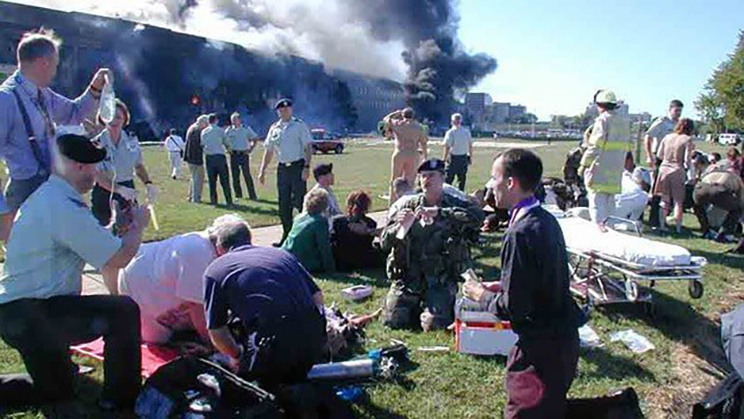 Father Stephen McGraw kneels in prayer behind a victim of the Sept. 11, 2001, terrorist attack at the Pentagon in Arlington, Va. (CNS photo/Mark Faram, courtesy Catholic Herald)

Anyone who lived through the terrorist attacks of Sept. 11, 2001 – now astoundingly a full two decades ago – has no problem recalling distinct images from that unforgettable day. Smoke billowing out of towers, collapsed piles of rubble, people jumping from windows, the nose of a plane lodged into the wall of the Pentagon, a burning pile in a Pennsylvania field – these are but a few of the deeply painful scenes that were broadcast around the world on that Tuesday morning 20 years ago.

We also remember the aftermath, including the heroic and often sacrificial efforts of the first responders, the makeshift memorials for the dead, the wall of photographs of the missing and the military invasion of Afghanistan.

The fall of 2001 was a time of national mourning and of great anxiety. The United States and the American people would never be the same. But it also was a time of great unity. Americans were bonded together as one in shared grief and in the pride of national identity. Red, white and blue flags were everywhere as signs of solidarity and resolve.

Churches were packed, filled with individuals searching for peace and the deeper meaning of our shared suffering. It was a terrible time, but one made a bit more bearable by our togetherness.

Modern American history offers an account of a few similar events that brought the country together, such as the assassination of John F. Kennedy in November 1963, and the fatal disasters of the Challenger and Columbia space shuttles in January 1986 and February 2003, respectively.

Then there was the start of the pandemic in March 2020, when the world was brought together out of concern over an enemy that would come to be known as COVID-19, under whose effects we continue to linger.

In those early days of the coronavirus pandemic, heaven was stormed with collective prayers. Social media exploded with free streamed events from entertainers whose tours or shows had been put on hold. There were calls to action to stay apart, together — to be united as one as leaders got a handle on how to best fight the virus.

Now, we are in the midst of a surging delta variant, and the pandemic, which was looking so promisingly under control only two short months ago, is wreaking havoc on workplaces, schools and other communities.

As cases and hospitalizations continue to rise to alarming levels, any semblance of national unity around the virus is gone, and no one seems to have the will or desire to bring it back again. Disagreements and vitriol over wearing masks and getting the COVID-19 vaccine have left the social media space and are now taking place regularly within school boards, parish councils and families.

First responders, doctors and nurses are becoming increasingly frustrated with having to treat a population that actively chooses not to take preventive measures against a dangerous and contagious virus. Rather than coming together as one, we are choosing to stoke the flames of division — even sometimes revelling in our apartness.

What can be done? In the wake of 9/11, when it felt that the world had been shaken to its core, the U.S. bishops issued a pastoral letter that called Catholics back to the basics. They encouraged prayer, weekly fasting and an understanding of what the church teaches and why. They invited the faithful to engage in dialogue with those who are different from them, and to witness to the church’s teaching on the dignity of all human life, justice and peace. They encouraged Catholics to give generously to those in need, and to stand in solidarity with all who have suffered and continue to suffer.

More than anything, the bishops called Catholics back “to God and to one another in hope,” adding that “hope assures us that, with God’s grace, we will see our way through what now seems such a daunting challenge.”

This is the message we need to hear today, too. Rather than giving into the discord that is running rampant in society, Catholics must return to the basics: prayer, fasting, love of neighbour, dialogue, the truth of church teaching. In this way, we can help lead Americans to the healing that our country — and the world — desperately needs.

“Amid so much division, the memory of 9/11 can remind us to return to the basics” published online by Our Sunday Visitor, a national Catholic newsweekly based in Huntington, Indiana. It was written by the editorial board.