Identification of painting as 17th-century masterwork brings joy to parish 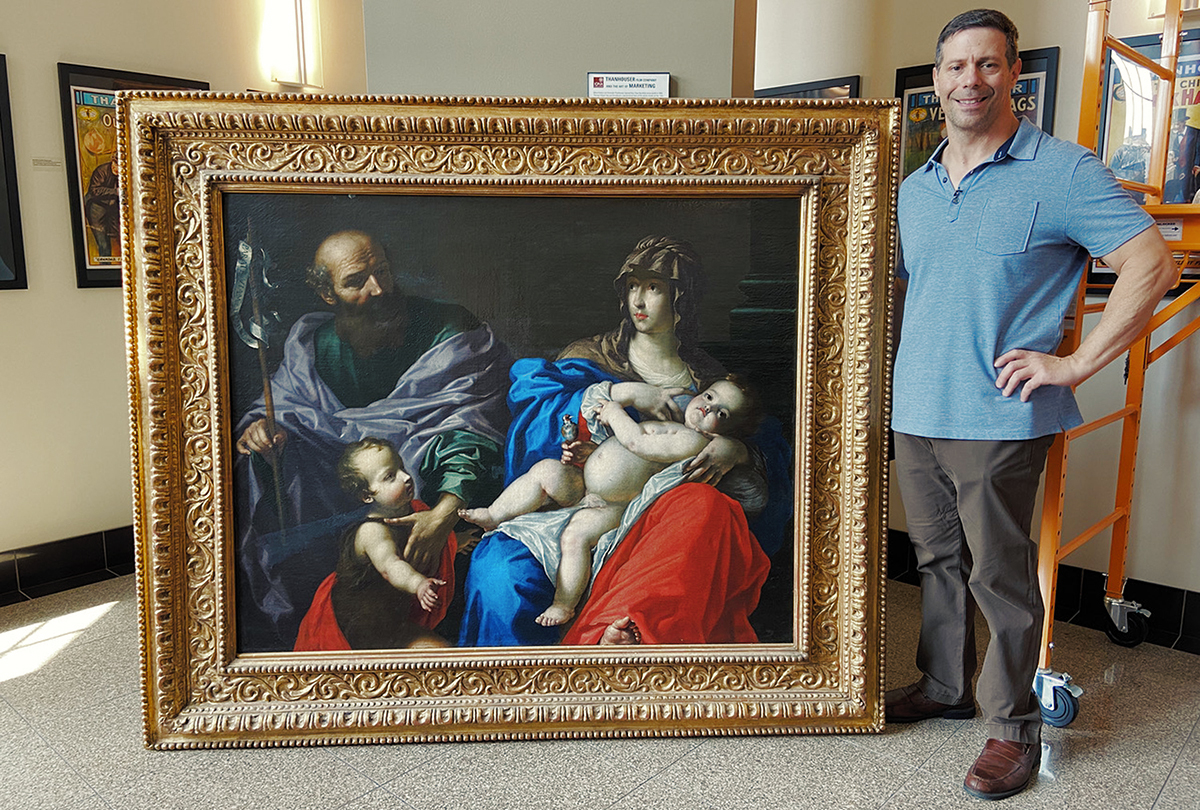 Thomas Ruggio, a fine art and art history professor at Iona College in New Rochelle, N.Y., is seen Sept. 13, 2021, standing next to Cesare Dandini’s 17th-century masterpiece “Holy Family with the Infant St John” in the atrium of the school’s Ryan Library. The artwork is on loan to Iona from Holy Family Church in New Rochelle. Ruggio was surprised to discover the painting during a visit to the church earlier this year. (CNS photo/courtesy Iona College)

By Beth Griffin – A parish in a neighbourhood that once had the highest concentration of Covid-19 cases in the country has found new joy in the discovery that a familiar painting over the transept doorway of its church is a 17th-century masterpiece.

“Holy Family with the Infant St John,” a Florentine Baroque by Cesare Dandini, was installed in the 1960s at Holy Family Church in the New York suburb of New Rochelle. Parishioners described it as one of many beautiful artworks at the parish.

Early in 2020, a professor of fine art and art history at nearby Iona College made several private visits to the church, sitting in a rear pew.

On his fourth trip, when the church lights were glowing, Thomas Ruggio saw the Dandini high on a wall over a transept exit. He recognised the painting as an Italian Baroque and took photos with his mobile phone.

Back at his office, he shared the photos with colleagues in Italy. The painting was positively identified as one of four similarly themed works by Dandini, likely created in the 1630s.

Ruggio’s further research at the Metropolitan Museum of Art in New York indicated that the painting was thought to be missing because there was no public record of it since the early-to-mid 20th century.

Msgr. Dennis Keane, Holy Family pastor, told Catholic News Service the painting was acquired in Rome by a predecessor of his, Msgr. Charles Fitzgerald, in the mid-1960s. Msgr. Keane said Msgr. Fitzgerald had once been assigned to Rome.

He said he thought a benefactor had given Msgr. Fitzgerald funds for the purchase. Msgr. Fitzgerald’s niece had the painting restored and framed before it was installed in the parish church.

Ruggio said the four related paintings have the theme of charity. Two are religious and two are not. All have a central maternal figure. Ruggio said “Holy Family with the Infant St. John” is one of Dandini’s finest works and the summit of his creative journey through this theme.

The 117cm by 145cm, oil-on-canvas painting includes Mary, Joseph and the infants Jesus and John the Baptist. Ruggio said the composition of the parish’s canvas is more dynamic than the other three.

“Joseph is almost a scene-stealer here and reaches his full potential because of his interaction with St. John the Baptist,” he said.

Of the related paintings, one is in the Metropolitan Museum of Art, another is in the Hermitage Museum in St. Petersburg, Russia, and the fourth is in a private collection in the New York borough of Manhattan.

“Holy Family with the Infant St John” is thought to be worth $800,000. Msgr. Keane said he had been told during his tenure that the painting was probably the most valuable in the parish’s collection, “perhaps in the neighbourhood of $50,000.” He said local lore ascribed the painting to the Dandini school, but not the painter himself.

“I was surprised at the news and thankful Tom (Ruggio) was able to do the research on the history of the art,” Msgr. Keane said.

Teresa Cohan Minnaugh grew up in Holy Family Parish. She said her family entered church and left church under the Dandini painting each Sunday.

“Sometimes your mind wanders during Mass. I remember looking at that painting and thinking, ‘Wow, those babies are fat. Real babies aren’t that big!'”

Susan Woodruff is the youngest of six children who attended Holy Family. She said her brother developed an interest in art at the parish and became a painter. His early tutelage helped her appreciate the three-dimensional aspect of the canvas.

“I always looked at the inside of the baby’s foot. It was so different,” she said. By Dandini’s purposeful design, the bottom of Mary’s foot also is visible to a viewer looking up at the painting.

On Sept. 17, “Holy Family with the Infant St John” went on display at Ryan Library at Iona College, an institution founded by the Congregation of Christian Brothers. It is on loan for three months from Holy Family Parish.

Richard Palladino, director of libraries at Iona, said its placement high on a wall in the well-lit atrium entrance allows it to be shared with students and the public.

“It’s also a wonderful opportunity for students to see something historic firsthand,” he said.

Msgr. Keane said he is happy to allow other people see and appreciate the work. He said the parish is preparing for the reinstallation of the Dandini painting, possibly to coincide with the feast of the Holy Family in January.

For now, the space where it hung is covered by a white curtain and Msgr. Keane is exploring appropriate security in anticipation of its return.

“People are looking at a blank wall now, but when the painting comes back, the image will penetrate their hearts – seeing Jesus, Mary and Joseph and the precursor, John the Baptist,” he said. “In the past, the painting was part of the background. Now it will be in the foreground.”

In March 2020, a large part of Holy Family Parish was included in New York state’s first mandated “containment area” established to fight the spread of Covid-19.

Msgr. Keane said the authentication of the Dandini “adds joy to life. We’ve had so much bad news, with the pandemic, riots and violence. This is good news. What was lost is now discovered.”