Pope: Holiness Does Not Come from Following Rigid Rules 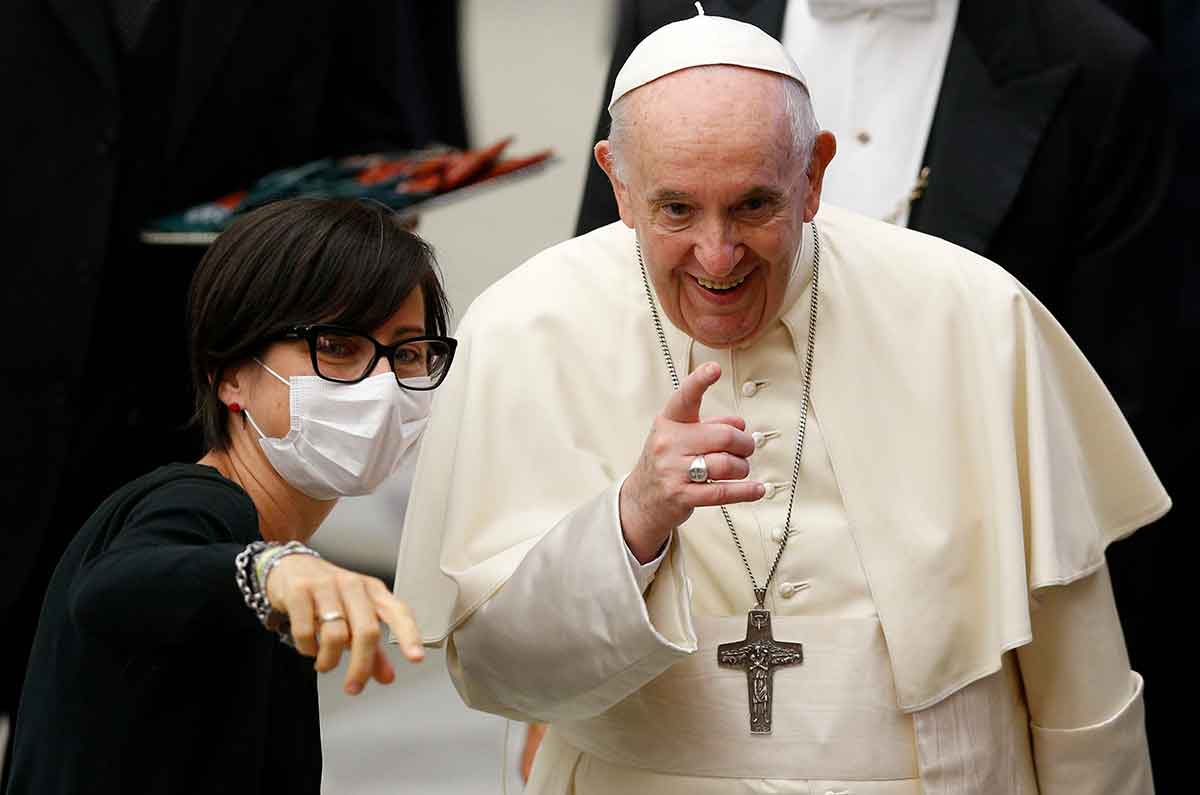 Pope Francis gestures as he talks with a woman during his general audience in the Paul VI hall at the Vatican on Sept. 1, 2021. (CNS photo/Paul Haring)

By Carol Glatz – Redemption is the work of God, not of human beings, so be careful and do not listen to “fundamentalists” who claim holiness comes through following certain laws, Pope Francis said during his weekly general audience.

The belief that holiness comes by observing particular laws “leads us to a rigid religiosity, a rigidity that eliminates that freedom of the Spirit which Christ’s redemption gives us. Beware of this rigidity that they propose,” he said Sept. 1 to those gathered in the Paul VI audience hall at the Vatican.

The pope continued his series of talks on St Paul’s Letter to the Galatians by looking at the apostle’s explanation of justification by faith and of graces flowing from the Spirit, not from works of the law.

However, before beginning his catechesis, the pope spoke off-the-cuff to explain the context and purpose of the weekly audience talks, which are usually in-depth reflections on many aspects of church teaching.

The pope said the teachings in St Paul’s letter were not anything new or “my own thing.”

“What we are studying is what St Paul says during a very serious conflict” in Galatia. “They are not things that someone invented. No. It is something that happened at the time and that can repeat itself,” he said, referring to the apostle’s attempts to correct those who were tempted to believe a person is justified through works of the law, not faith in Christ’s redemptive action.

The pope said, “This is simply a catechesis on the Word of God expressed in the letter of St Paul to the Galatians. It is not something else. Always keep this in mind.”

Even though he did not specify the reason for making the out-of-the-ordinary opening remarks, it may be related to negative reactions to his Aug. 11 general audience talk. Rabbi Rasson Arousi, chair of the Commission of the Chief Rabbinate of Israel for Dialogue with the Holy See, sent a letter to the Vatican asking for clarification because the pope appeared to suggest Jewish law was obsolete, according to Reuters, which saw the letter.

In that catechesis on St. Paul’s explanation that the law given to Moses did not nullify God’s promise to Abraham, the pope said, “The law does not give life, it does not offer the fulfilment of the promise because it is not in the position of being able to fulfil it.”

Abraham, who preceded Moses by more than 400 years, shows that faith in God brings righteousness, he said, which St. Paul used to illustrate that the gentile Galatians heard with faith and experienced justification like Abraham and, therefore, they did not have to follow Mosaic law, such as with male circumcision, as some new preachers at the time were claiming.

A Vatican source confirmed to Catholic News Service Sept. 1 that a response to the rabbi’s letter was in the works.

The pope’s talk on Sept. 1 continued along the same line of the danger of “these new preachers” who had convinced some Galatians “that they had to go back and take on the norms, the precepts that were observed and led to perfection before the coming of Christ.”

St. Paul tries to convince these Christians they risked losing “the valuable treasure, the beauty, of the newness of Christ” if they let themselves “be enchanted by the voice of the sirens who want to lead them to a religiosity based solely on the scrupulous observance of precepts,” the pope said.

They knew that their coming to faith “was the initiative of God, not of men. The Holy Spirit had been the protagonist of their experience; to put him on the backburner now in order to give primacy to their own works, that is, fulfilling the precepts of the law, would have been foolish,” he said.

Christians today must also reflect on how they live their faith, he said. “Does the love of Christ, crucified and risen, remain at the centre of our daily life as the wellspring of salvation, or are we content with a few religious formalities to salve our consciences?”

What happened in Galatia can still happen today in similar ways, the pope said, warning people not to listen to “these somewhat fundamentalist proposals that set us back in our spiritual life; try to go forward in the paschal vocation of Jesus.”

Even when people are tempted to turn away from God with distractions and their sins, “God still continues to bestow his gifts” and he “does not abandon us, but rather abides with us in his merciful love.”

“Let us ask for the wisdom to always be aware of this reality and to dismiss the fundamentalists who propose a life of artificial ascesis,” that is, the practice of strict self-discipline “that is far removed from the resurrection of Christ.”