Pope: Leadership Can be Distorted by Thirst for Power 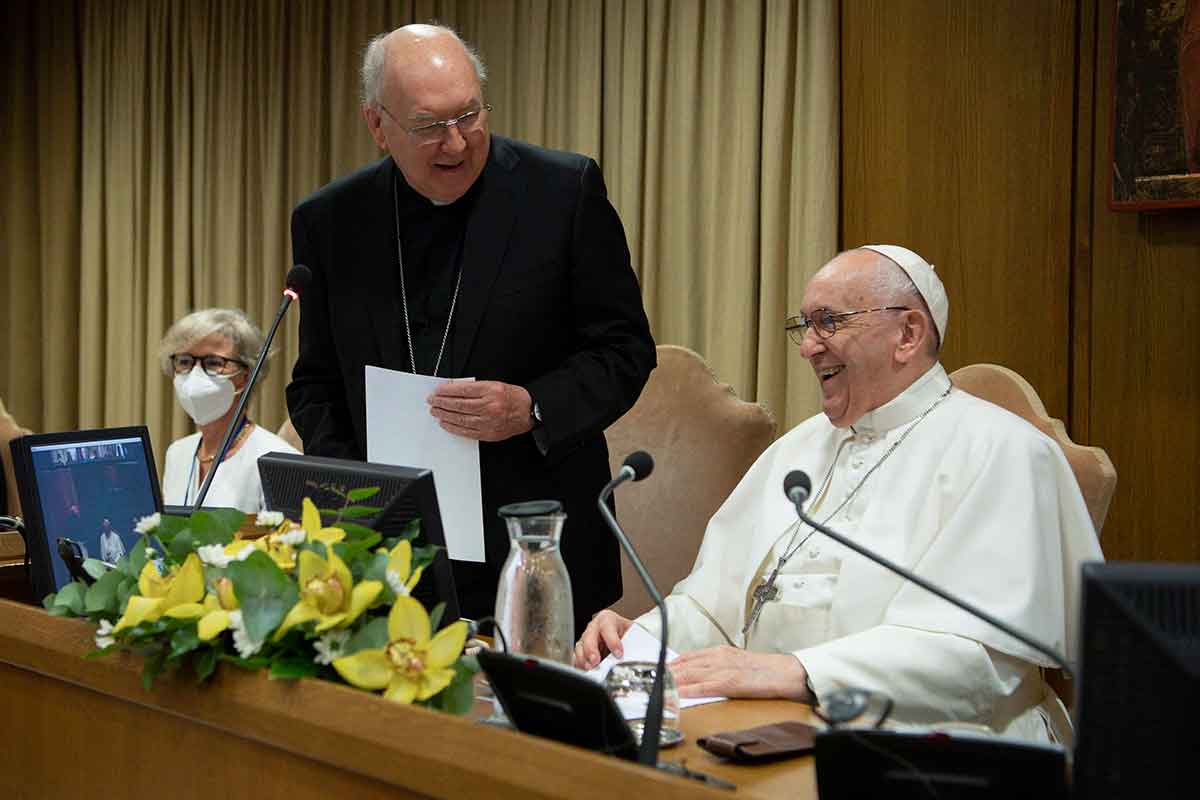 Pope Francis is joined by Cardinal Kevin J. Farrell and Linda Ghisoni, respectively president and undersecretary of the Dicastery for Laity, the Family and Life, during a meeting in the Vatican synod hall Sept. 1, 2021. Pope Francis spoke to people taking part — online and onsite in Rome — in a meeting organized by the dicastery, focusing on the issue of responsible governance in lay movements and associations. (CNS photo/Vatican Media)

By Carol Glatz – Pope Francis praised Catholic lay movements and associations for living out the Gospel in their everyday lives and for promoting education, social support and evangelisation in the world’s peripheries.

They show how “we don’t have to wait for a priest to come, for the priest to evangelise or a missionary,” he said, applauding the way many movements have reawakened the understanding that all the baptised have the duty to evangelise and be a missionary church.

However, just like the world’s religious orders and congregations, the pope said, lay movements and associations of the faithful are just as susceptible to abuses and problems, all of which stem from an abuse of power.

All associations, not just some or just the large ones, must learn what good governance entails, he added.

The pope spoke Sept. 16 in the Vatican’s synod hall to people taking part – online and onsite in Rome – in a meeting organised by the Dicastery for Laity, the Family and Life, focusing on the issue of responsible governance in lay movements and associations. Participants included “moderators” of associations of lay faithful, movements and new communities.

The pope told them: “To govern is to serve. The exercise of governance within associations and movements is a topic that is particularly close to my heart, especially considering – what I said before – the cases of different kinds of abuse that have occurred in these situations, too, and that they always find their roots in the abuse of power.”

“This is the cause – the abuse of power,” the pope said.

The issue of abuse of power and good governance is so close to his heart that the pope’s already lengthy original talk of four pages became five pages as his off-the-cuff remarks expanded on particular points, offered explanations and provided colourful examples.

For example, to hammer home the toxic nature of entrenched leadership that refuses to prepare future leaders to take the reins, the pope recalled one religious institute whose members surreptitiously referred to their leader as “Odiobilia,” that is, “hateable,” instead of her actual name, “Amabile,” which meant “lovable,” because, he said, “they realised that woman was ‘Hitler’ in a habit.”

There are two obstacles to the call to use leadership as a way to serve others: the desire for power and unfaithfulness to one’s vocation as a Christian, that is, leading a double life that is no longer dedicated to God, but to other things, which always include money, he said.

There can also be unfaithfulness to the charism – which is a gift of the Holy Spirit – when people present themselves as the “only interpreters of the charism” or “the only heirs” so they do everything to stay in power “for life” or decide for themselves who their successors are, he said.

The Vatican has often had to intervene over the years, he said, not just dealing with serious scandals, but also in cases of “sickness,” when the founding charism has “weakened” and fails to attract new members.

The pope reminded his audience of a recent set of norms for international Catholic lay movements and associations. They were released by the dicastery in June and went into effect starting in September. The new norms impose term limits on central leadership and mandate that all members have a voice in choosing their leaders as part of an effort to protect people from possible abuse by the groups’ leaders.

Those norms, which the pope approved, are meant “for everyone, no exception. There are not those who are better or less great, perfect or not. Every church entity is called to conversion, to understand and put into action the spirit that animates the regulations given in the decree,” he said.

The pope said the new decree came because of a consistent pattern of recurring situations over the past several decades, showing there was a need to make some changes.

As a way to illustrate what this tendency was, the pope pointed to the fact that the Vatican Congregation for Institutes of Consecrated Life and Societies of Apostolic Life have begun to study all the religious congregations and associations that have been founded after the Second Vatican Council.

“It’s curious, very curious,” he said, how they have discovered that a very large number of these institutes “have ended up in very difficult situations — they have come under an apostolic visitation, they’ve ended in depraved sins,” have been placed under outside leadership and so on.

The study is showing that it has not just been happening with the larger groups, but also small institutes, he said, and that the scandals are not just the more well-known ones but include things groups “have done in order to feel like a separate church, they seem like saviours!”

He said he knows of three religious institutes in his native country of Argentina that have already been suppressed after ending up in some “dirty” or dishonest situations.

“Weren’t they the salvation? They seemed like it. But there is always that common thread of disciplinary rigidity. This is important” and this is what has emerged from looking at the past several decades, which has made clear the need for the kind of changes in the new decrees for lay groups, he said.

The pope ended his address by thanking them for listening and urging them to be open and honest at their meeting.

“Ask things you want to ask, clarify the situation. This is the meeting for doing this,” he said. “And don’t forget to pray for me, because I need it. It’s not easy being the pope, but God helps, he always helps.”