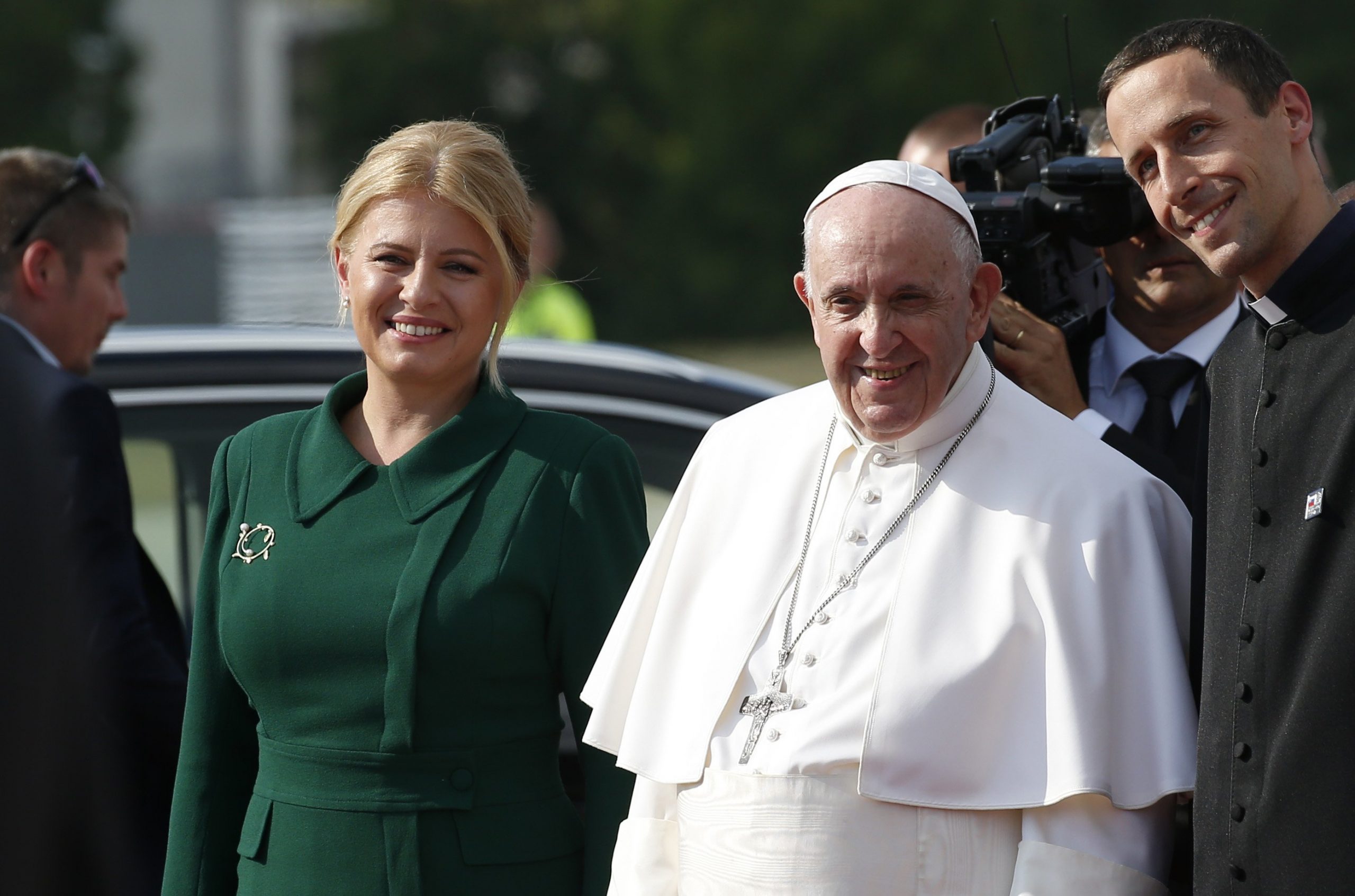 Pope Francis is pictured with Slovak President Zuzana Caputová as he arrives at the international airport in Bratislava, Slovakia, on Sept. 12, 2021. (CNS photo/Paul Haring)

By Junno Arocho Esteves –  Hundreds of men, women and children gathered on the tarmac of Bratislava international airport on September 12 to welcome Pope Francis for a visit of less than 72 hours.

As Pope Francis made his way down the steps of the plane, the crowd, some of whom were dressed in traditional Slovak clothing, waved yellow and white flags and cheered. Two children presented him with bread and salt, a traditional gift presented to honoured guests.

Slovak President Zuzana Caputová greeted Pope Francis, who arrived in the country from Budapest, Hungary, where he met with religious and government leaders and celebrated the closing Mass of the International Eucharistic Congress.

After his arrival in Bratislava, the pope was whisked away to the apostolic nunciature, where he met with ecumenical leaders and reflected on the freedom shared in the country “after years of atheistic persecution, when religious freedom was stifled or harshly repressed.”

He warned them against “the temptation to return to bondage, not that of a regime, but one even worse: an interior bondage.”

The pope explained that often, when one feels that “things have quieted down” and settle into the hope “of a peaceful and tranquil life,” the goal is no longer freedom but instead in “the staking out of spaces and privileges, which as far as the Gospel is concerned, are bread and little else.”

“Let us not be concerned only with the things that can benefit our individual communities,” the pope said. “The freedom of our brothers and sisters is also our freedom, since our freedom is not complete without theirs.”

Drawing from the example of Ss Cyril and Methodius, the ninth-century missionary brothers who evangelised Central and Eastern Europe before the division of Catholicism and Orthodoxy, the pope said the evangelisation of Slovakia “began with brotherhood.”

Pope Francis prayed that the saintly brothers would intercede for all religious faiths in the country so that “they help us to persevere on our journey by fostering our fraternal communion.” 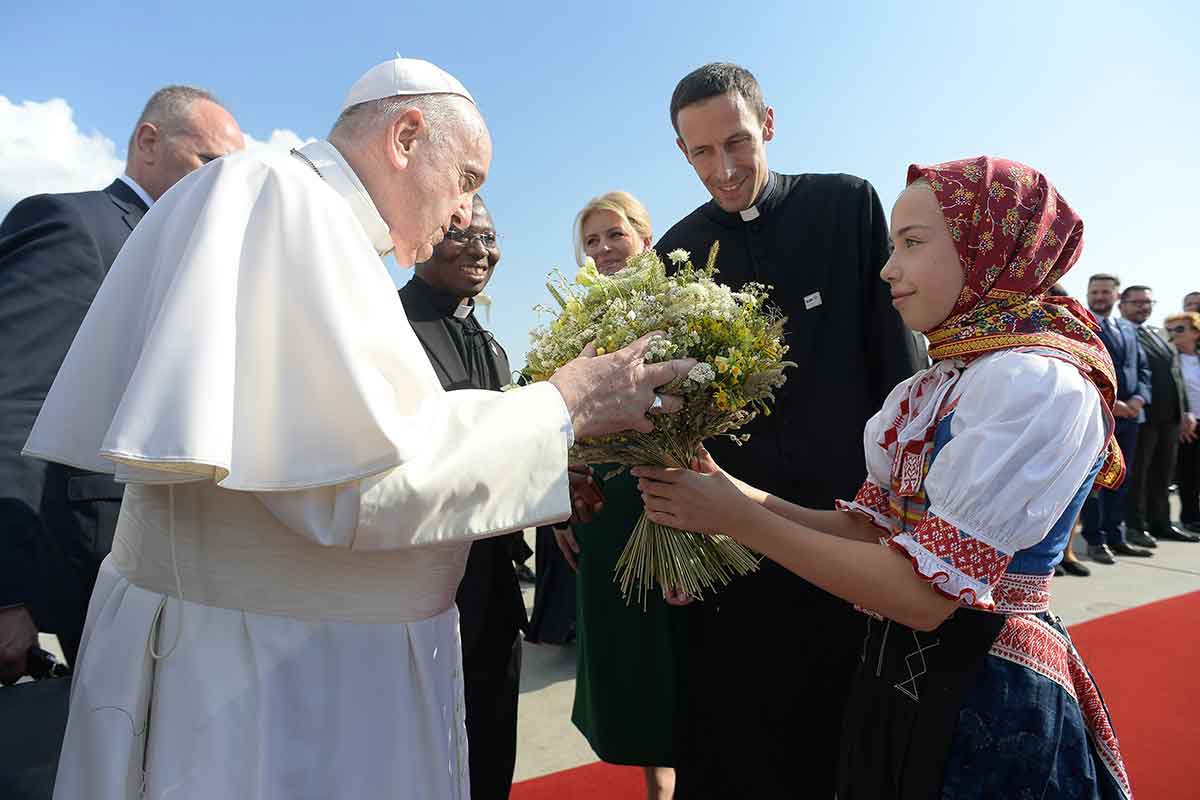 Pope Francis accepts flowers as he is welcomed by Slovak President Zuzana Caputová at the international airport in Bratislava, Slovakia, on Sept 12, 2021. (CNS photo/Vatican Media)

“For that matter, how can we hope that Europe will rediscover its Christian roots when we ourselves are not rooted in full communion? How can we dream of a Europe free of ideologies if we lack the courage to put the freedom of Christ before the needs of individual groups of believers?” the pope asked.

“It is hard to expect Europe to be increasingly influenced and enriched by the Gospel if we are untroubled by the fact that on this continent we are not yet fully united and are unconcerned for one another,” he said.

Among those present at the meeting were Metropolitan Rastislav, head of the Orthodox Church in the Czech and Slovak Republics; Lutheran Bishop Ivan Elko, president of the Ecumenical Council of Churches in Slovakia; and Richard Duda, president of the Central Union of Jewish Religious Communities.

Afterwards, Pope Francis met privately with members of the Jesuits in Slovakia.

Hewill meet with representatives of Slovakia’s Jewish community, as well as Catholic and government leaders, on September 13. The following day, he will travel to Košice and Prešov for meetings with the Roma community and young people and a meeting and Divine Liturgy with Byzantine Catholics. Before returning to Rome on September 15, he is scheduled to celebrate Mass at the Basilica of Our Lady of Sorrows in Šaštín-Stráže.

The government mandated that anyone attending a papal event must have a COVID-19 vaccine.