Group burial of urns provides opportunity for closure for loved ones 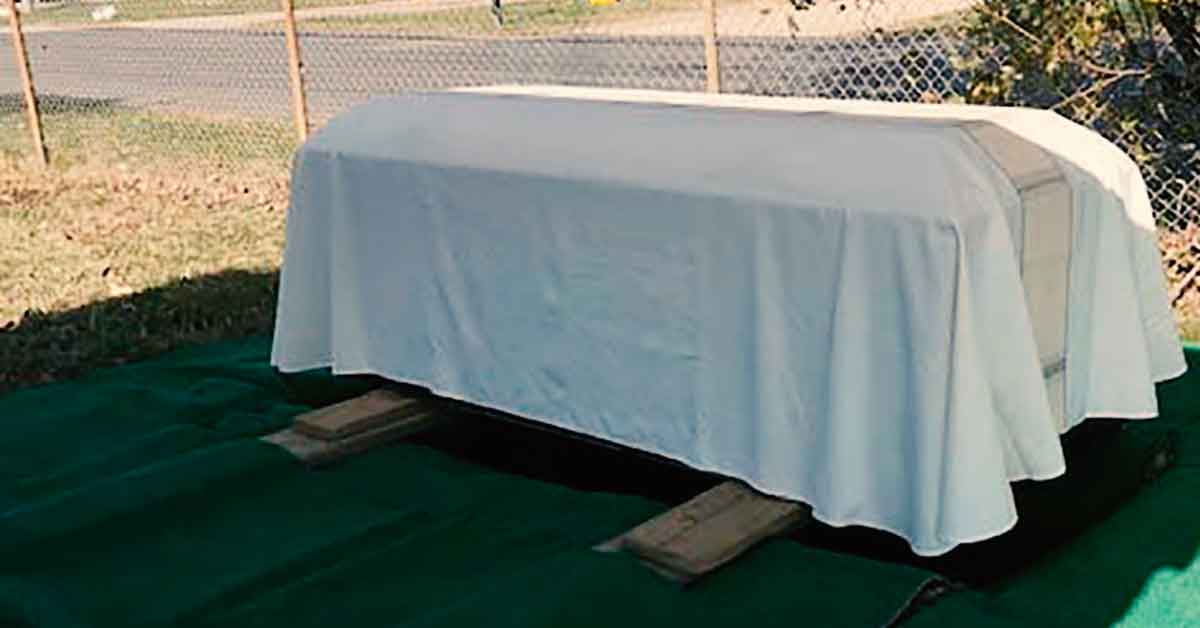 A pall-covered vault containing ashes of the deceased awaits burial before an All Souls’ Day rite of committal in 2019 at Holy Cross Cemetery in Brooklyn, Md. (CNS photo/courtesy Archdiocese of Baltimore Office of Cemeteries)

By Christopher Gunty- If you have an urn or vessel containing the remains of a loved one sitting on a shelf in your home, US-based Father Patrick Carrion is helping put that to rest.

As director of the Office of Cemeteries for the Archdiocese of Baltimore, Father Carrion was organising a rite of committal and burial for cremated remains on All Souls’ Day, Nov. 2 at Holy Cross Cemetery.

Two years ago, Father Carrion conducted a similar service, with 18 to 20 urns buried, but there was no such service last year, due to pandemic restrictions. He expects there may be more than 20 urns buried this year.

He noted that there are many reasons why people might have ashes of loved ones at home. Perhaps one spouse died and the other chose to keep the ashes in memory, and with the intention that when the surviving spouse died, they would be buried together. That then leaves the responsibility of handling the remains to children or heirs.

“Now the kids have two urns,” Father Carrion said. “What do they do with them? It just gets punted down the line.”

He recalled meeting a man who was cleaning out his mother’s house after she passed away, to prepare it for sale. Within the home were three containers of ashes belonging to people that the man had heard about in family stories but had never met because they had died before he was born.

“The person who has initial custody (of the remains) and is not burying it is passing the responsibility down to the next generation,” he said.

The burial or entombment of remains can provide some closure, Father Carrion said. It also allows other relatives and loved ones to visit a burial site to pray and pay respects, which they would not do if the remains are at a private home.

“I’m not going to call my cousin and say, ‘Can I come and stand in front of your closet?'” to pay respect to an aunt.

In 1963, the Vatican Congregation for the Doctrine of the Faith issued an instruction permitting cremation in the Catholic Church as long as it was not done as a sign of denial of the basic Christian belief in the resurrection of the dead. The permission was incorporated into the Code of Canon Law in 1983.

In 1997, the Vatican Congregation for Divine Worship and the Discipline of the Sacraments granted an indult for the United States to allow the diocesan bishop to permit the presence of the cremated remains of a body at a funeral Mass.

Even so, the Order of Christian Funerals notes that “the church clearly prefers and urges that the body of the deceased be present for the funeral rites since the presence of the human body better expresses the values which the Church affirms in those rites.”

Cremated remains of a body should be treated with the same respect given to the human body from which they come, the rite notes.

Ashes are not to be kept at home, scattered or divided up. “The practice of scattering cremated remains on the sea, from the air, or on the ground, or keeping cremated remains in the home of a relative or friend of the deceased are not the reverent disposition that the church requires,” it says.

“We treat the dead the same way we treat the body; we don’t just toss them away,” Father Carrion told the Catholic Review, Baltimore’s archdiocesan news outlet. With more than 40 Catholic cemeteries across the archdiocese, there are plenty of opportunities for burial of loved ones.

The document was approved by Pope Francis after consultation with other Vatican offices and with bishops’ conferences and the Eastern churches’ synods of bishops.

Although the document clarified some things, it did not really change much in practice in the United States, since the presence of cremated remains at a funeral was already allowed.

The instruction did, however, reiterate the church’s preference for the burial of the body in normal circumstances, and, when cremation is necessary or chosen, its insistence that the remains be properly interred.

Father Carrion noted that burial is “the dignity of giving the deceased a final resting place” and that becomes a sacred place. Even Christ was buried, he said, and Scripture notes that unless a grain of wheat falls upon the ground and dies, it cannot bear fruit.

“This shows the consistency of our theology from womb to tomb,” he said.

Father Carrion said that those who are entrusted with the remains of loved ones are custodians or caretakers, but they don’t own the ashes. Just as you would not keep a dead body in a home, so too, you should not keep cremated remains.

To make it more affordable, Father Carrion said the concept of the All Souls’ Day rite shares the costs so that those who have an urn at home can choose appropriate burial. The cost for the service is $350 (R5000) per urn or vessel.

The priest collects urns or whatever container/vessel the ashes currently are in from family members. They are stored in a safe vault at the archdiocese’s New Cathedral Cemetery until the burial time.

The ashes are placed in a vault – a concrete burial container, a little larger than a typical casket – each one separated from others in the group. Each urn is encased in a cloth sack with the name of the deceased on it.

If two spouses will be buried together, their ash containers are placed next to each other within the vault.

Father Carrion will celebrate the rite of committal at the gravesite, and then the vault will be buried in the ground. A headstone with the simple date, Nov. 2, 2021, will be placed at the site, and the names of each of the deceased entombed within will be recorded in the cemetery’s records so the grave can be located for visitors.

The gravesite for this year is adjacent to the site for 2019’s burials.