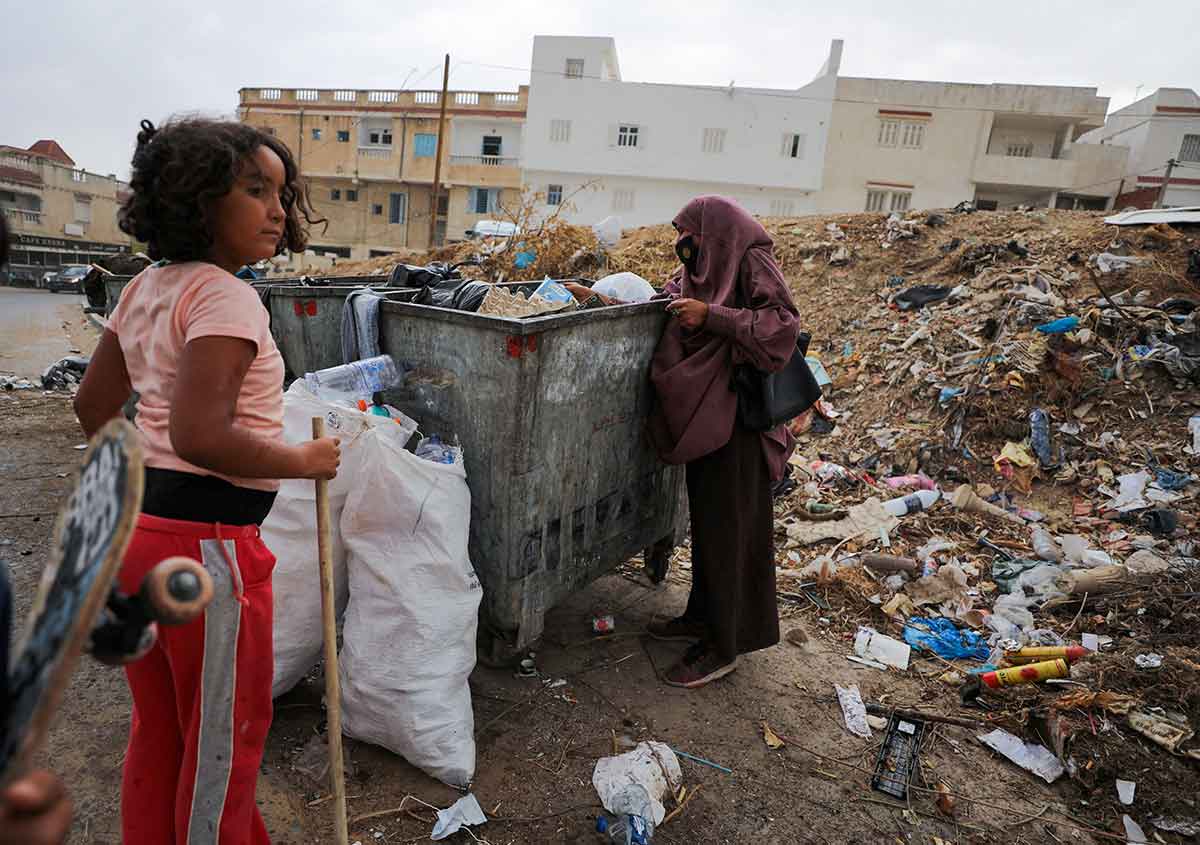 A Tunisian woman and girl look for plastic in a garbage container to earn money in Tunis July 31, 2021. Global poverty can be ended immediately if the world makes doing so a priority, speakers said during a Vatican workshop. (CNS photo/Ammar Awad, Reuters)

“What we have now is poverty in the midst of plenty,” he said in the opening talk of a two-day workshop at the papal academy.

It would only take about $1 trillion, that is, 1% of the global gross domestic product or about 6% of the $15 trillion owned by the wealthiest 3,000 people today, “to end extreme deprivation” by immediately providing $1,000 a year to each of the world’s poorest one billion people, he said.

“This is not an agonisingly complex challenge from an economic point of view,” said Sachs, who is director of the Center for Sustainable Development at Columbia University. More difficult has been the ability to mobilise those who are needed to make it happen.

Sachs was one of several speakers invited to the pontifical academy to discuss the theme: “Science and Ethics of Happiness. Caritas, Social Friendship and the End of Poverty.”

The Oct. 3-4 workshop was sponsored by Columbia University’s Science and Ethics for Happiness and Well-being Initiative, and the papal academy made a small number of the talks available on its YouTube channel in late October.

The Vatican had announced Oct. 25 that Pope Francis named Sachs to the Pontifical Academy for Social Sciences, an advisory body.

Poverty, he said, is not the passive result of wealth not reaching everybody but comes from “deliberate human action” that includes pervasive discrimination, violence, displacement and deprivation of traditional homelands for Indigenous peoples.

Policies to end poverty must first and foremost “stop the harm” and is “morally the most urgent of all because these are deliberate impositions that have kept people,” groups and parts of society in poverty, he said.

Other policies would need to include “income transfers to households or basic social protections,” he said.

“Nothing is wrong with that. If people are hungry, help them to eat. If people are in need because they lack the most basic income, help them,” he said. This kind of basic charity is a tradition that goes back thousands of years and “shame on us” for no longer “routinely and automatically” applying this age-old understanding.

A more long-term serious effort would take “a generation of investing in children to really make the breakthrough for irreversibility, to really ensure that every child grows up in a healthy way” with all of his and her most basic needs met, he added.

“We need economic wealth as a foundation for life” and meeting basic needs, said Sister Alford, who is an expert in economic ethics, management theory and corporate social responsibility.

The beatitude of “poverty of spirit” indicates a “healthy” attitude toward wealth, one that is opposed to greed and avarice, she said.

It requires the care of stewards – who are detached from greed and do not see themselves “as owners controlling,” she said.

“Living the first beatitude (‘Blessed are the poor in spirit’) should help us to cultivate wealth in an appropriate way, in a way that puts the common good before the private good” and moves toward a world in which human beings are not controlled by “the weaknesses” found in human sin.

Stefano Zamagni, president of the Pontifical Academy of Social Sciences and professor of economics at the University of Bologna, said the key is reducing inequality.

“You can diminish poverty via redistribution from the rich to the poor, but inequality might – as has been the case the last 40 years – keep on growing,” he said. “Redistribution is necessary, but it is not enough.”

Inequality today is not the result of a real scarcity of resources but is caused by an artificial scarcity generated by greed and avarice, he said. Avarice is “a very terrible, dangerous social vice” because it generates this scarcity.

For this reason, “compassion and benevolence are not enough. We need to move toward justice,” he said.

“Poverty today is a case of institutional failure,” he said, meaning “the rules of the game” in economics and finance are wrong.

St John Paul II introduced this notion as “structures of sins” in that they are “institutions which compel good people to produce nasty results,” that is, people can have good intentions, but they are “doomed to generate perverse results,” said Zamagni.

Justice could be seen as “predistribution” in which the resources are spent on people ahead of time, like in education, he said.

Ecumenical Patriarch Bartholomew of Constantinople said in his talk that “efforts to confront destitution and social injustice are an expression of (the church’s) faith and the service to the Lord who identifies himself with every person, especially with those in need.”

“It is impossible for the church to truly follow Christ or to make him present to the world if it fails to place this absolute concern for the poor and disadvantaged at the very centre of its moral, religious and spiritual life,” he said.

Jesus’ commandment to love goes beyond helping one’s neighbour and requires fighting the causes of injustice and “the roots of their suffering,” he said. “Today we are capable of influencing history and changing our destiny.”