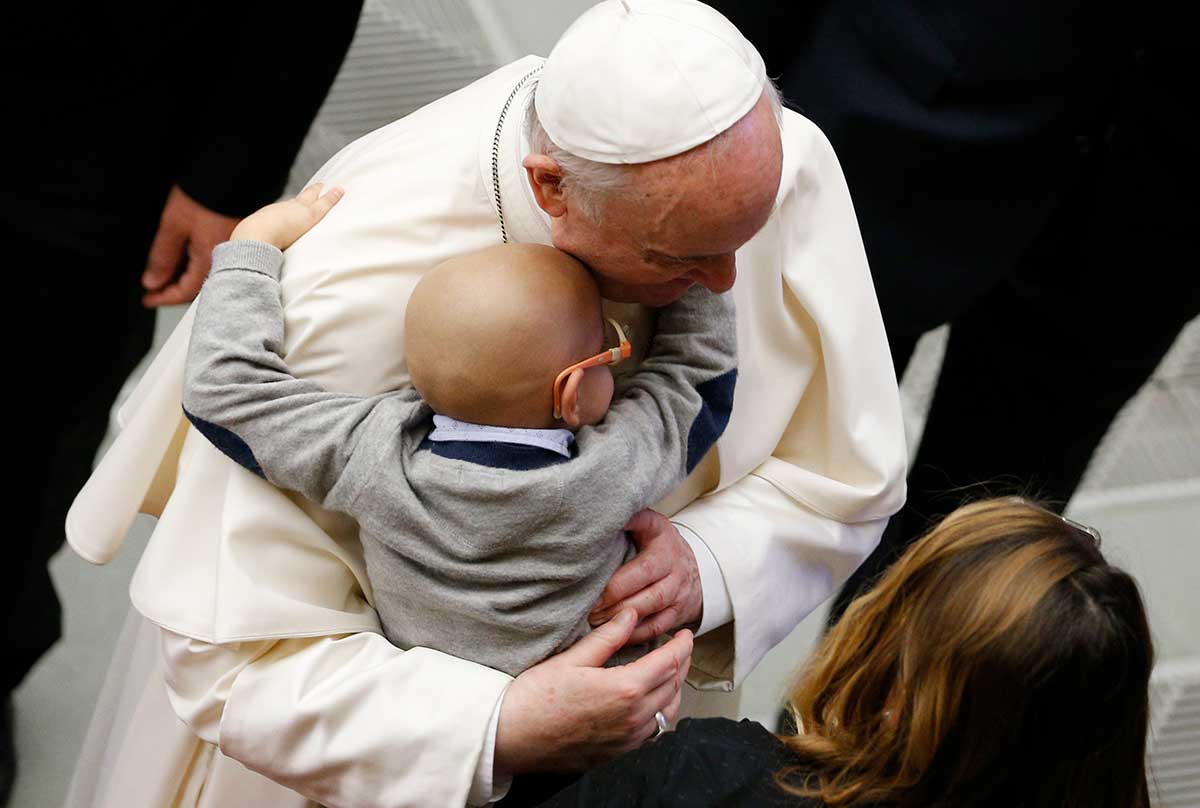 Pope Francis is embraced by a child during his general audience in the Paul VI hall at the Vatican on Oct. 27, 2021. (CNS photo/Paul Haring)

By Junno Arocho Esteves –  The beauty of faith comes from opening one’s heart to love and not fixating on following rules and regulations, Pope Francis said.

Similarly, the desire to receive the grace of the Holy Spirit, especially in the sacraments, “cannot be suffocated by a bureaucracy that prevents access to the grace of the Spirit, the initiator of conversion of heart,” the pope said Oct. 27 during his weekly general audience.

“How many times we ourselves, priests or bishops, create so much bureaucracy to give a sacrament, to welcome people, that people say: ‘No, I do not like this,’ and they leave, and often they do not see in us the power of the Spirit who regenerates, who makes us new,” he said.

The pope received a warm welcome from the many pilgrims attending the general audience in the Paul VI audience hall. As hundreds applauded and sang loudly, the pope said, “So much enthusiasm!”

Pope Francis continued his series of talks on St Paul’s Letter to the Galatians, focusing on the fruits of the Spirit which the apostle said were “love, joy, peace, patience, kindness, goodness, faithfulness, gentleness, self-control.”

The pope said St. Paul reminded the Galatians that the death and resurrection of Christ should be at the centre of one’s faith and warned against the temptation of basing “their religiosity on the observance of precepts and traditions.”

He also noted that the same temptation exists today, and “there are many who still seek religious security” by focusing on “rituals and precepts instead of embracing God’s love with their whole being.”

“This is the temptation of the new fundamentalists, isn’t it,” the pope said, departing from his prepared remarks. It is the path followed by “those who seem to be afraid to make progress, and who regress because they feel more secure: they seek the security of God and not the God of our security.”

“If we lose the thread of our spiritual life, if a thousand thoughts and problems assail us,” he said, “we should make Paul’s advice our own and place ourselves before Christ crucified” because “he is the one who changes the heart; not the things that we do, but the action of the Holy Spirit in us changes our heart!”

St Paul’s warning about the “works of the flesh,” the pope continued, was not “because there is something erroneous or bad about our human bodies,” but was a warning that focusing solely on “worldly instincts” can close the door “to the Spirit who lifts us up and opens us up to God and others.”

Christians also must face the challenge of conveying the joy and freedom of the Holy Spirit, especially when those “who approach the church get the impression that they are dealing with a dense mass of rules and regulations.”

“No this is not the church!” Pope Francis said. To reduce faith to just following “commandments or a moral vision” can “make us forget the original fruitfulness of love nourished by prayer from which peace and joyful witness flow.”

“We, therefore, have the huge responsibility of proclaiming Christ crucified and risen, enlivened by the breath of the spirit of love. For it is this love alone that possesses the power to attract and change the human heart,” the pope said.